Catherine Berlin introduces us to The Doctor Next Door 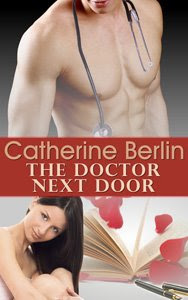 Catherine Berlin grew up on a farm in rural Virginia. She has been writing stories and spinning tall tales from the time she could talk. In high school, an aptitude test revealed that Catherine should become a writer, a lawyer, or an actress. Instead she paid for college by singing in a rock band. That's how she met her husband, the drummer.

Nicole North: Welcome Catherine! I'm so glad you're here! Please tell us about The Doctor Next Door, out now from Red Sage.

Catherine Berlin: The Doctor Next Door is a sexy little story about Gen Downey, a romance writer who uses her fantasy man--neighbor and ER doc Brandon Dalton--as a model for the hero in her Scottish historicals. Their connection is all just fantasy for Gen until their mail gets mixed together and she finds her real life hero at her door.

NN: Sounds like a fun situation! Hot cover too! (If my doctor looked like that, I'd go for more checkups!) Do you have some reviews you could share with us?

CB: "The Doctor Next Door by Catherine Berlin is a delicious read. The plot is a mixture of passion with a touch of humor. The innocence of Gen and the maleness of Brandon make for a hot steamy relationship. Every damsel wants someone that will protect her. Berlin has a winner! Fans of romance will not want to miss The Doctor Next Door." ~Reviewed by Anne Boling for ReviewYourBook.com

“I enjoyed this short-but-sweet story from the first page to the last. In fact, I wouldn’t even wish for it to be longer, because Ms. Berlin gave me everything I needed to know about the characters, along with a well-developed storyline told with humor and sincerity. It was fast-paced, warm, funny, and spiced with danger. Brandon was a refreshing and endearing change from the over-achieving, deadly serious, God-complex doctor; he was dedicated, but not blind to the outside world. The chemistry between the two main characters rang true, and I felt their affection as well as their attraction for each other. This was a great read, uncomplicated without being simplistic, and told with plenty of heart. I may not have needed this book to be longer, but I wouldn’t mind re-visiting these two!” --Julia C. Manicreaders.com

“Catherine Berlin gives every historical romance reader their fantasy--the hero come to life. OK so maybe not ‘come to life’ per se, but certainly having the man the character is modeled after voluntarily dress and act the part is enough to give me tingles. THE DOCTOR NEXT DOOR is more than just a simple fantasy being played out, it’s a wonderful story about next door neighbors who are attracted to each other but believe that a long-term relationship isn’t feasible. Gen thinks that the sort of hero she wants only lives in fantasies and books. Brandon can prove otherwise. Wonderful story Ms. Berlin! I’ll hope to see many more like this in the near future.” --Chrissy Dionne, Romance Junkies


NN: What fantastic reviews! What inspired you to write this story?

CB: My stories usually come to me in my dreams. My big task is to get them written down before they fade into daylight! Like Gen, I write both contemporary and historical novels, and I almost always have a face in mind for the hero. What I love about this story is that Gen's "face" is a living breathing man and he's right next door!


NN: That would be incredibly inspiring to any writer. Who is your favorite character in the story and why?

CB: Brandon, of course! I love the alpha hero. Takes charge, saves the day... but he's thrown by his feelings for the heroine. Brandon, who is so very sure of himself, ends up completely befuddled by this young woman he sees as sweet and innocent, and red hot at the same time.

NN: You have some other books published. Please tell us about them. 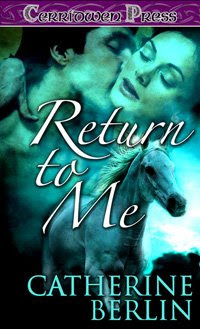 CB: RETURN TO ME was published by www.cerridwenpress.com in December 2007. Return to Me, sort of a "CSI meets Braveheart," takes place mainly in modern day Richmond and Scotland, but through the story the reader sees the hero and heroine as they were in medieval Scotland. It is a story of lovers who have been reincarnated over and over, only to have their lives end in tragedy. In this life, the heroine is determined not to let that happen. Her problem? The hero has forgotten her. She has to remind him of their connection before their enemy murders them once again.

OUTSIDE THE FIRE was published by LionHearted.com in 2005. Outside the Fire is a sweet novel about Nick and Brandy. As a boy, Nicholas Walford set a fire that nearly killed a little girl. Now a ruthless businessman, he discovers she is an employee in one of his factories. Out of guilt he offers her a dream job in his office. But he never expects to fall in love. Brandy accepts the mysterious job offered by her new boss, and wants to accept his love, but when she learns he is responsible for all of the misery in her life, will her love be strong enough for forgiveness? Outside the Fire was an Romantic Times Award nominee in 2005.

NN: Wow, those both sound fascinating! What are you working on now and what upcoming projects do you have?

CB: I'm working on quite a few projects right now. I have a few manuscripts out under consideration- a Scottish historical, a few sexy novellas, and a romantic suspense, plus I have a sweet novel coming out from Moonlit Romance in June 2008.

NN: You are very busy. And congratulations on your latest sale! Would you like to ask blog readers a question?

CB: Oo! Try to think of the most unlikely pairing of a hero and heroine. Whether it's a "type", like a female CEO of a major company and ... the produce guy at the grocery store, or already established characters, like Willie Wonka and... Lara Croft. What "out there" pairing would you love to read about between the covers of a book?

NN: Now that's an interesting question! Thanks again Catherine for visiting with us today and telling us about your books!

What a great question! An 'out there' pairing? Hmm... that is a hard question, but it has the wheels turning.

Great interview!! That doctor is hot! Your books sound fascinating!

As for your question, wow! That's a tough one!

As for already established characters...Mr. Darcy and Elizabeth I!

Thanks for the fun!

Wonderful interview, Nicole. And Catherine, your books sound wonderful. Seeing those dreams of yours on real life pages must be so great. Good luck with the doctor!

Thanks for visiting, Holly, Eliza and Pat!

Catherine, I loved The Doctor Next Door.

One of my favorite unlikely pairings was in the movie Father Goose. Does anyone remember that one? Cary Grant and Leslie Caron. "Goody-two-shoes and the Filthy Beast!" LOL