My Captive Highlander has been Released! :) 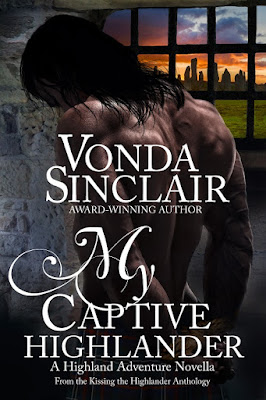 Can unexpected passion and a little ancient magic turn enemies into lovers?

During a fierce storm on the west coast of Scotland, Shamus MacKenzie barely survives a galley wreck only to be captured and held for ransom by the enemy MacDonalds. Aided by the gift of second sight, Maili MacDonald, sister of the ruthless chief, senses the handsome, dark-haired stranger will somehow be important in her life. Compelled to help him, she insists on providing him food and a healer to see to his injuries. She knows she is daft to fall in love with this captivating warrior after one forbidden kiss but cannot help herself. With each visit from Maili, Shamus finds his thoughts consumed by the enchanting lass. Can he convince her to help him escape the dungeon and prevent the impending battle between the two clans?
Available at Amazon, Smashwords, and coming soon to B&N, iTunes, Kobo, etc.

The twenty-oar birlinn sliced through the rough waters off Scotland's west coast. The cool wind lashing at him, Shamus MacKenzie glanced up at the dark clouds hovering over the gray-violet sunset. A storm was fast approaching.
His oldest brother, Cyrus, Chief of Clan MacKenzie, had sent him and his two brothers, Dermott and Fraser, along with full crews on their two galleys to escort the Earl of Rebbinglen to Glasgow. Having accomplished their task five days ago, the brothers and clan members were now on their way home. The weather had been calm until this night.
Black clouds rolled in faster and faster. Lightning flashed, near blinding him. They were in for a thrashing.
"Whose canny idea was it to leave Inveraray?" Fraser grumbled behind him.
Shamus turned, barely able to make out his younger brother's blue eyes and black hair in the dimness.
He well knew Fraser would've liked to have stayed at Inveraray for a fortnight with all the lovely ladies. "Cyrus wanted us to return home forthwith," Shamus said loudly enough to be heard over the rising wind. If they'd stayed any longer, no doubt his irritable older brother would've sent a fleet of galleys to fetch them home.
Though now, he wished they had waited a day or two to continue their journey north.
Thunder boomed and the western wind off the sea blasted them. The oarsmen heaved and grunted, trying to stay the course as the galley rode up and down through the giant swells.
"Stay away from the rocks!" Shamus commanded. The white caps and swirling currents betrayed the dangerous hidden boulders closer to shore.
The helmsman shouted something Shamus couldn't hear over the wind.
Drops of rain stung his face, and a moment later, pummeled him in cold sheets.
Saints, he'd never been at sea in such a quick and terrible gale. Blood pounded in his ears as he tried to figure out a course of action. How could he keep his younger brother and his clansmen safe?
Dermott manned the other galley. During a lightning flash, Shamus' gaze scanned over the rough waters and he glimpsed the other vessel some distance behind them.
"May God protect us all," he whispered, salty seawater splashing into his mouth.
Torrents of chill rain drove against them. Though the sail was down, the fearsome wind, along with the enormous waves, propelled the birlinn eastward, toward the shore and the treacherous unseen boulders just beneath the churning surface.
"Stay the course!" Shamus commanded, scrambling over two thwarts and joining the helmsman in the stern. He grabbed hold of the rudder, helping to steer. He squinted through the rain, able to see only the outline of the mainland. The torches on shore they'd been using to help gauge their route had recently been doused in the downpour. The brilliant flashes of lightning revealed little but the violent sea.
A massive wave crashed into the birlinn and sent it careening into a deep trough. Shouts sounded all around him as Shamus grappled to keep his hold on the slippery rudder, his stomach dropping.
Was this the end? Would they all die this night?
"Hold on, Fraser!" he yelled.
The oak hull crashed against the rocks and splintered. The massive jolt knocked his hands from the rudder and Shamus plummeted overboard into the icy depths.
Despite the shock, he forced himself to hold his breath, kick his feet and swim toward the surface. Fear for his brothers and the crews of both galleys infused him with strength. Fortunately, most of them knew how to swim, but if some had been hurtled into the rocks, they might be badly injured.
When his head broke through the seawater, he barely had time to inhale before another powerful wave crashed over him, driving him down again. The water roared in his ears. Flailing, he propelled himself to the surface with his legs.
After inhaling a breath of air, he yelled, "Fraser!"
The lightning overhead illuminated naught in the dim gloaming but the giant boulders protruding from the sea. Had their clan's other birlinn been smashed to pieces, or had Dermott and the crew managed to stay offshore enough to avoid the peril? Where were Fraser and his own crew?
Shamus flung the wet hair from his eyes and yelled his brother's name again. This time when the lightning flashed, all he saw were fragments of their birlinn's broken hull floating out to sea.
"Saints," he hissed. Surely they weren't dead. "Dear God, protect them," he whispered.
Another great wave rose up west of him. He ducked beneath the surface to avoid the worst of the hit. The force of it sent him tumbling deeper. His head and shoulder slammed into a gigantic rock. Pain pounded through him and his head spun. Feeling the boulder anchored in the sea, he climbed up it for a breath of air and held tight. When the next wave struck, he couldn't hold out. The power of it sent him rolling through the waves and all went black.
Available at Amazon, Smashwords, and coming soon to B&N, iTunes, Kobo, etc.

Love the cover, Vonda, and Shamus!