Last weekend was the hot air balloon festival in Quechee, Vermont which is always held on Father's Day weekend. I love this picture which my friend's husband took.

A balloon festival is highly dependent on the weather. Even though Friday and Saturday were beautiful summer days, it was too windy in the evenings so the balloons were only able to take off on Saturday morning. The downside to that is that they take off starting at 6 a.m. So I missed it.

But my husband went down to the field where they take off, which is a short walk from our house. Fortunately he took his car because they had a large number of balloons go off and he decided to follow them. (It's a male thing because my friend's husband did the same thing which is how he got that picture.)

Here's one of the pictures my husband took. 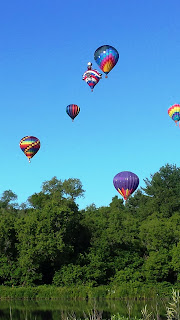 He was thrilled to be able to help some of the balloons land. (Male thing again.)

The balloons are obviously dependent on the wind and on this occasion they were blowing away from our house. Sometimes they blow toward our place and we can sit on the deck and talk to people in the basket. I've learned to get dressed before going out there for the 6 a.m. show. :)

Balloon enthusiasts come from all over the US and some from Canada. I look forward to seeing the same balloons each year, but also to seeing the new ones. My husband met a guy who left his house in CT at 3 a.m. to get there for the 6 show time. (His wife refused to come. Male thing.)

Despite what I'm saying about the guys, I do enjoy the festival. They also have light shows at night if the weather permits. 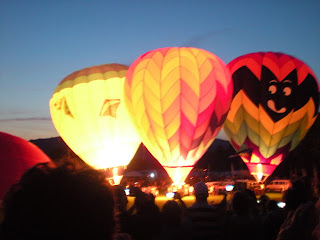