Seduction - One Fortune at a Time 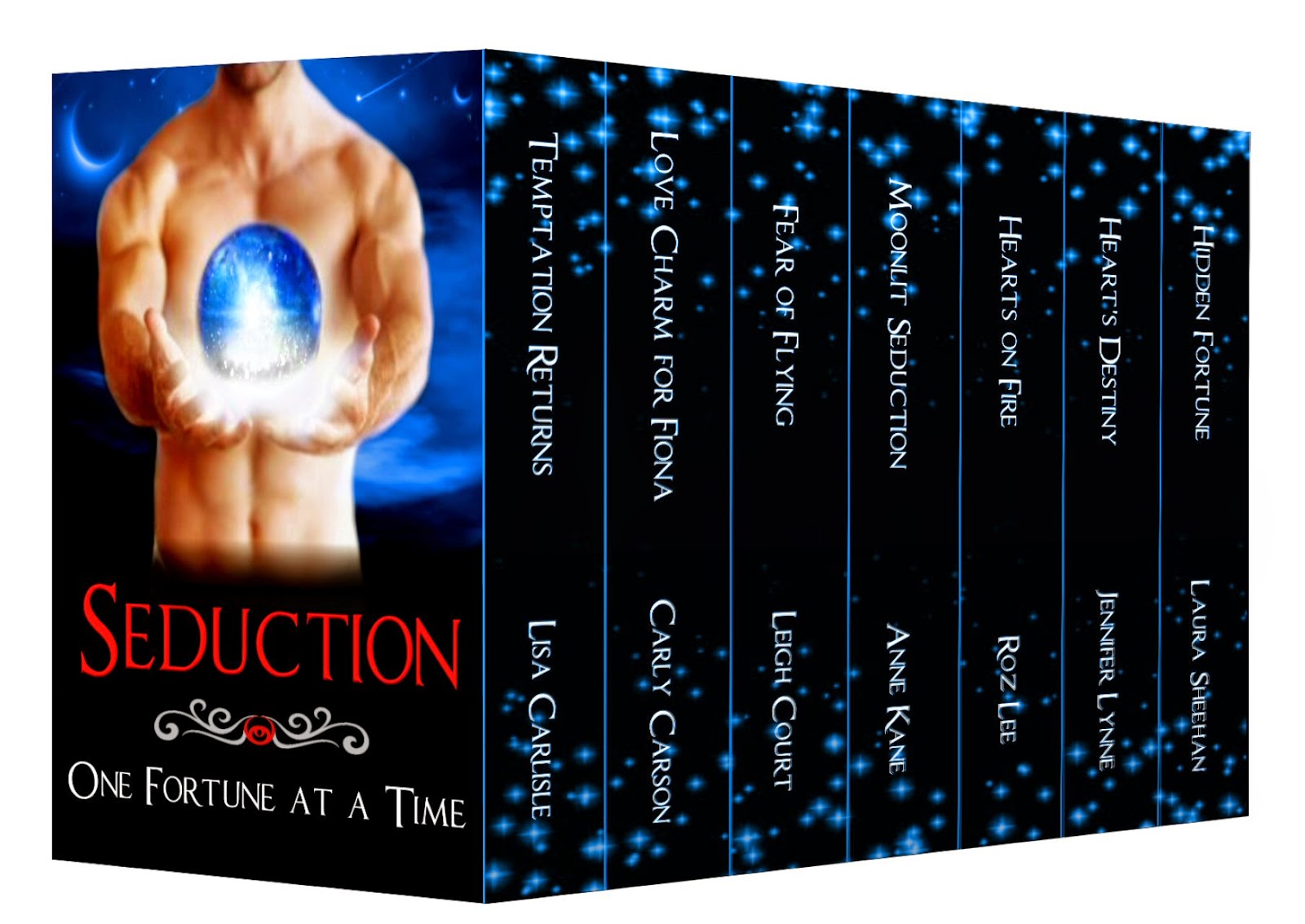 Who doesn't want a fabulous fortune told - especially one featuring your dream hero?


Our new anthology features seven steamy novellas from seven acclaimed romance authors, guaranteed to bring good fortune (or at least a hot read) to any romance fan. There's a seduction for everyone in this collection of never-before published stories that range from sensual to erotic—all for one seductive price of 99 cents! (This offer is for a limited time only.)

My story in this anthology is Love Charm for Fiona. Here's a blurb and an excerpt:

Blurb: When Fiona receives a fortuneteller's love charm, she casts the spell to bring her dead fiancé back to life. But a love charm has its own magic, and what she gets is a surprise in the form of a Navy SEAL on "shore leave".

Excerpt: In two minutes, Jack was back, hustling Fiona out of the car. "Come on. We've got the end unit."

"Are you always in such a rush?" The motel was bringing everything into stark reality. She was standing here waiting to hook up strictly for the purposes of sex with a man she hadn't known a week ago. How had this happened?

Then Jack grinned at her and said, "I'll be slow where it counts."

Her pulse sped up again, her body softened and she couldn't do anything but take the hand he held out.

He closed the door behind them and Fiona stood there for a moment. The room had a quaint, old Cape Cod feel, with white painted furniture, light taupe walls, and a blue and taupe muted floral on the drapes and bedskirt. A snow white comforter covered the bed, which at first was the only thing she could see. Then she noticed she could see the ocean through the French doors on the far side of the room. That was a nice touch.

Jack's eyes followed her gaze. "We probably should close the curtains," he said.

"Just the sheers." She crossed the room and pulled them shut, grateful for something to do so she didn't have to think about the implication of his words. She knew why she was here and she didn't want to be coy about it. Jack disappeared into the bathroom, surprising her, but he was back before she had a chance to think about it. He reached for her in the pale gray light of the room.

"Removing our clothes is something that can be done fast," he said.

He reached for the hem of her cover-up and pulled it over her head. For a long moment, his gaze traveled up and down her body, as if he were savoring what was about to happen. He settled his hands on the straps of her swimsuit and pressed them over her shoulders. Her suit didn't fall, held up by the support of the bra inside. He drew both hands over those cups, removing them as he caressed her revealed breasts.

She heard him suck in a sharp breath. "Perfect," he said. Her suit fell to the ground. He gave a quick look down, but then returned to her breasts, stroking and fondling. Her nipples were already pointed with need, but he didn't seem satisfied with that. He continued to caress her until her back was arched, and she was breathing as heavily as he was.

"Isn't this the part that's supposed to be fast?" she moaned. She wanted nothing more than to fall on the bed and have him plunge inside her. How had she waited five long years—or was it her whole life?—to feel like this? "Take off your clothes." He was still fully dressed, in his damp swimming trunks and his Blue Angels t-shirt.

"In a sec." He propelled her toward the bed, finally picking her up and depositing her onto the poufy comforter. "I want to be sure you're ready. I won't last long once I'm naked."

He came down on the bed next to her. "This is going to be a slow part." He wrapped an arm around her, pulled her to her side, and closed his mouth over hers. He kissed her deliberately, licking her lips, licking inside her lips, holding her head with one hand, while his free hand drifted from her back to her breast, and began stroking fire through her.

His kisses moved down her neck, nipping and soothing, as tension built within her. When he reached her breast, she closed her eyes, finally giving up the attempt to reach under his shirt and touch his hot skin. He was pushing her onto her back again and when she was flat, her put his mouth over her nipple and licked her.

She almost shot off the bed. "Jack!" She clutched the back of his head.

He lifted his head for a moment. "Easy," he said. "We're still in the slow part."

"I'll give you slow." She reached for his waistband.