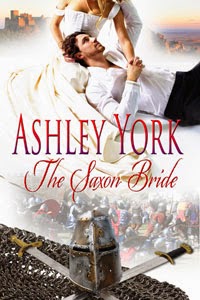 Always an avid romance reader herself, Ashley York enjoys bringing history to life through vibrant and meaningful characters, writing historical romance novels full of passion and intrigue set in the 11th and 12th century British Isles. Her newest release, The Saxon Bride, is the first in The Norman Conquest Series.

Q: Welcome, Ashley! Thank you for being our guest today! Please tell us about your latest release. Do you have a review you could share with us?
A: My latest release is The Saxon Bride. It's the first in The Norman Conquest Series which has two more books in it. The series takes place circa 1074 in war torn England and looks at the combining of two very unique cultures - the Normans from the continent and the Saxons that have the power at the time - three cultures with the next book which is about Peter and includes an Irish family.
The Saxon Bride: In war torn England the battle lines between Saxon and Norman are clearly drawn. The Saxons must fight for everything they have in the hopes of winning their country back from the Normans who are determined to break their resistance.
Rowena Godwinson, the sole remaining member of the defeated royal family, stands proudly against the Normans that would trample them underfoot but her nobility and grace make her an ideal pawn in the Norman King William’s play for power with the Saxon people. When he decrees she marry a powerful Norman knight, her subjugation appears to be complete. The handsome soldier with the kind brown eyes and gentle touch is a threat to her determination to defy the interlopers. Can she hold firm to her Saxon heritage and refuse to give in to his advances? John of Normandy wants only to prove himself worthy of the king's trust. He is rewarded for his service and loyalty with land, titles and a Saxon beauty for a bride. John balks at the marriage, driven by the secret guilt of knowing Rowena's father would still be alive if not for him. However, John's reluctance is soon replaced by a burning desire to please this woman and win her over as well as her people. As their people look to them for guidance and peace, can John and Rowena find a love that unites all of England?

I have one review so far:
"The Saxon Bride a great historical romance to recommend! Ms. York is a very descriptive writer, I could feel the tension between the Normans and the Saxon’s distrust. I’m looking forward to her next book in this series."
Q: What inspired this story?
A:  I was taking a little holiday with my sister and she told me about a woman that kept contacting her boyfriend - her name was Abigail. That was all it took. I just imagined a manipulative, self-centered woman and Abigail was created. Then I needed to have a hero who would thwart her advances (John) and it grew from there.
Q: What is the story behind the story?
A: A Norman knight who is happy with life as a soldier is ordered to marry a Saxon princess who's orphaned because he killed her father. He leaves her to return to the fighting rather than stay and do his husbandly duties. When he returns five years later, he is enamored by a beautiful woman who turns out to be his wife but she won't be giving in easily to a man who left her untouched.
Q: Why do you write romance?
A: I always loved reading romances that were set in historic, distant places with exotic people that come together under all different circumstances. I loved to learn what made the characters tick and how, despite all the odds, they'd end up happily together. I love the emotion, the turmoil, the conflicts, the seduction...the whole thing.
Q: What do you enjoy most about writing romance?
A: I strive to create from my own imagination the elements that make other readers enjoy what I did - the emotion, the turmoil, the conflicts, the seduction, the consummation, the ever after...
Q: How did your story’s setting impact your plot or characters?
A: The setting is everything - I'm Irish, Scottish, Welsh, and English - the area just sets my imagination going. There would be no story if the Norman knight hadn't been given the charge  to win over the Saxons and winning over his wife should have been the easiest but the Saxons were proud people and not easily subjugated which is who Rowena symbolizes to me.
Q: How do you choose names for your characters? 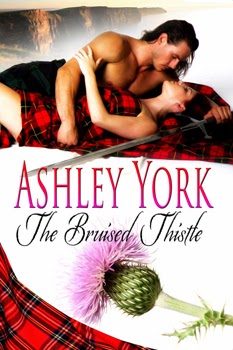 A: For The Bruised Thistle, I was learning Scottish Gaelic and these were actual names in our text- Iseabail and Seumas, Iain, Calum.
The Saxon Bride, which I started writing after The Bruised Thistle, is actually about the relatives of the heroine, Iseabail. Since her brother's name, Iain, means John, I knew there had to be a John in there. I always thought the name Rowena was pretty.
Q: Where is your favorite place in the world?
A: Scotland - my very Irish father would have preferred I say Ireland but there's just something about Scotland. It's hard to explain. Both countries have been treated poorly by the English but the idea that Scotland was right there and had no distance to protect itself from their edicts makes it so much more tragic to me. They're just amazing. I know they're pragmatic and we all are just romanticizing but I can't help thinking about the pride and fortitude of people who more than once were pushed aside from their rightful place as the Monarchy - don't get me started.
Q: Which element of this story was the hardest for you?
A: This is a spoiler if you haven't read The Saxon Bride but writing about the baby dying. It broke my heart. I cried through the writing of the whole scene. I was blessed with three healthy children but death during childbirth was always a very real possibility during this time period.
Q: When did you know you wanted to be an author?
A: I come from a family of writer want-to-bes. The desire is definitely there it's the actual doing that's the challenge. I am blessed with a situation that supports my desire.
Q: What is your writing process or method?
A: I'm new so I'm still developing my process and it changes as I push myself to write better and write more. I am pretty disciplined with my work time although my family would say I need to learn how to stop for the day. It's just hard with deadlines and people working with you that have limited availability, or if there are computer issues. Resolving these things can become the prime focus and take you away from spending time with friends and family.
Q: What’s next for you?
A: Working on Peter's story and Iain's story. Need some good titles if anyone has any ideas.
Q: Would you like to ask readers a question?
A: Do you have a favorite time period that you like to read?
Ashley is giving away an ebook of The Saxon Bride to one lucky commenter. Please remember to leave your email address to enter so we can contact you.
Please visit Ashley online:
www.ashleyyorkauthor.com
Facebook
The Saxon Bride
By Vonda Sinclair at August 12, 2014
Email ThisBlogThis!Share to TwitterShare to FacebookShare to Pinterest
Labels: Ashley York, historical romance, medieval romance, The Saxon Bride

I don't really have a fav time period. A good author can drawn me into a story set in any period. That said, I do love historical romances. This sounds to a be a wonderful read. Thanks for the giveaway!

I'm sorry, I forgot to leave my email address: lindalou@cfl.rr.com Thanks again!

Hi Lindalou, I think I'm the same way - if a story is good and draws me in, I enjoy it. Writing about a specific time period just gives me an opportunity to really delve into so much more about the people that lived then. Thanks for your comment.

I love historical romances. The Saxon bride looks like a grest read. You are so lucky to have experienced the beauty of Scotland. Ot is my dream destination.

Well, Laura, I hope some day you do get to go. I've been wanting to get back for several years now but with one thing or another, it hasn't worked out. Thanks for stopping by.

Hi Ashley this is one of my favorite time periods to read and I'm looking forward to the entire series! How do you go about doing your historical research for your books? Have you traveled to many of the places you write about? Thanks for taking the time to share and chat with us! My email is amadee68@gmail.com

Hi Lisa, I love research and finding original sources that were written at the time. It just fascinates me. I think I was twelve years old when I found a penny that was dated 1942. I was so intrigued with the idea that the penny could have been in the pocket of a soldier in WWII! I find history fascinating and with this time period, archaeological findings can tell even more than the actual documents that have survived. Thanks for stopping by.

Sorry I forgot to leave my email
hawkwoman3@yahoo.com

As long as it has a scotsman in it I don't care about Time period..... LOL. Loved Bruised Thistle <3

Ann, this story is about Iseabail's (from The Bruised Thistle)great, grandparents so it's before The Bruised Thistle. He's a Norman who doesn't know who his parents are (hint, hint, hint) and she's a Saxon. The series moves them up to the north. Very glad to hear from you.

I love history, so I like most time periods.

Hi Charlene, I love history, too. Maybe you had a good history teacher somewhere in your past? Thanks for stopping by.