Last Tuesday, I posted the first part of this information about Dunnottar Castle.

Dunnottar was another one of my favorite places I've visited in Scotland. It's such a dramatic ruin within an incredible landscape. 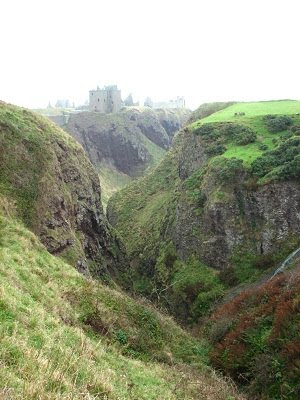 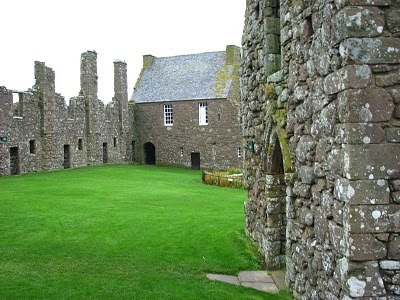 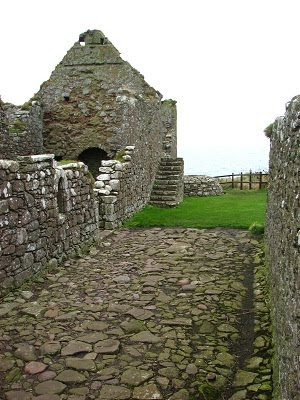 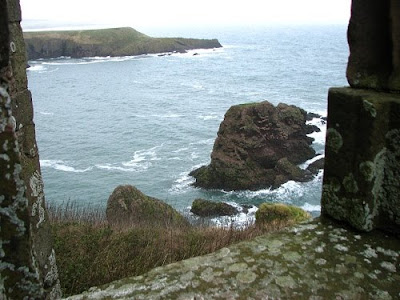 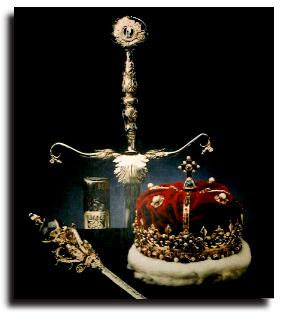 Many of the kings and queens visited or stayed at Dunnottar, and there is an interesting story about the Honours of Scotland (above) and Dunnottar. 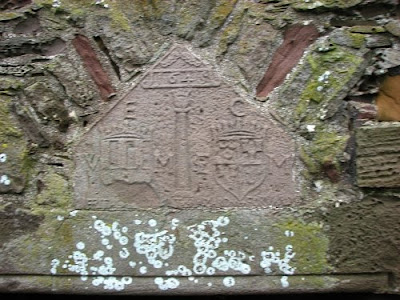 The English General Overton, by the order of Oliver Cromwell, attacked Dunnottar in 1651, trying to seize the Honours of Scotland, which consists of the royal crown, a scepter and a sword. (These are now kept in Edinburgh Castle and I was able to see them on my previous visit.) Cromwell wanted the Honours, an important symbol of monarchy, destroyed. George Ogilvy and those defending Dunnottar held out for 8 months, but finally were forced to surrender under heavy cannon fire. Overton was not able to get his hands on the Honours because Anne Lindsay smuggled them away. They were taken to Kinneff Church and buried inside where they remained for 11 years until they could safely be brought out again and taken to Edinburgh Castle. 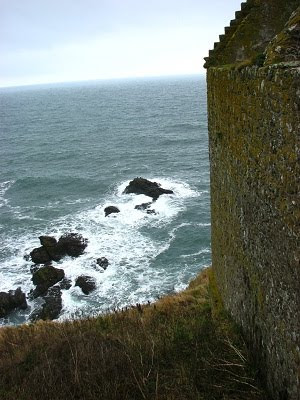 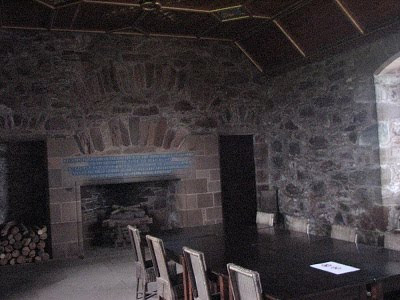 This is one of the few undamaged and furnished rooms in Dunnottar Castle. The inscription over the fireplace reads: "In commemoration of the defense of the Honours of Scotland from September 1651 to May 1652 by George Ogilvy of Barras, Governor of Dunnottar and of the help given by his wife Elizabeth Douglas and by her kinswoman Anne Lindsay." 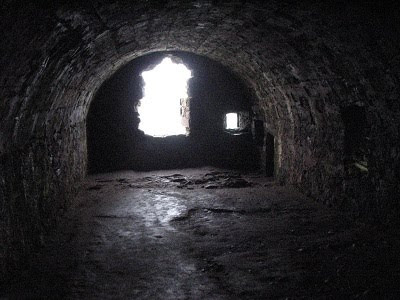 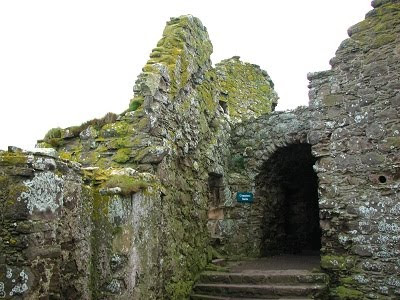 The Keiths held the castle until 1715 when the 10th Earl Marischal, George Keith’s possessions were seized as a result of his involvement with the Jacobite uprising. He was charged and convicted of treason. Following this, the castle lay in ruins and unused until the Cowdray family purchased it in 1925. They made repairs and opened it to the public. Their descendants are still the owners. 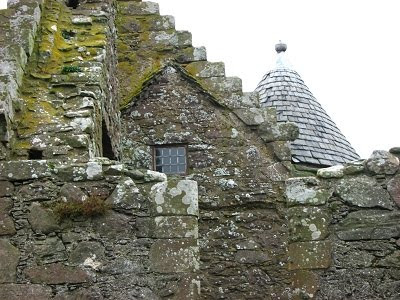 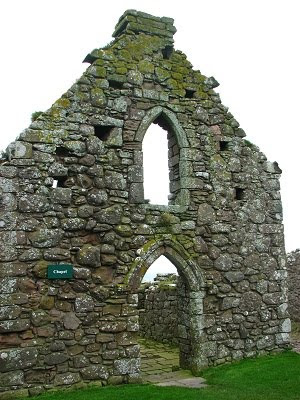 This is the 16th Century Chapel, above. 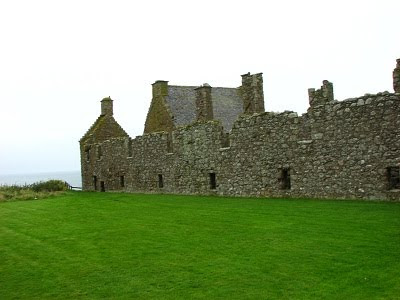 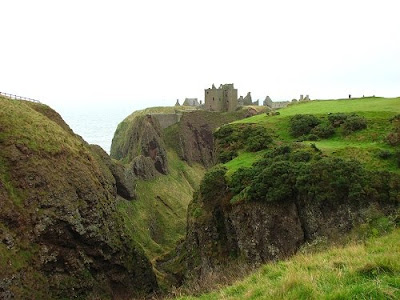 As we were leaving the castle, we took a narrow bridge into a steep sheep pasture where we had stunning views of the castle from a different angle, cliffs high above the sea.


Dunnottar Castle is definitely one of the most memorable places I've visited in Scotland. Thank you for going on this journey with me back to Dunnottar. I hope you enjoyed it!
:)
Vonda
www.vondasinclair.com

The more time Torrin spends with the strong and independent Jessie, the more determined he is to win her heart. Once she allows him a kiss, he feels her passion flame as hot as his own. After she knows Torrin better, Jessie finds herself falling for the fearsome Highlander. But the odds are stacked against them. The sinister MacBain is bent on kidnapping Jessie, making her his bride and killing Torrin, while Jessie's conniving younger brother, Haldane, is determined to use Jessie to take over the castle in his older brother's absence. Jessie fears she can never be with the man she loves, while Torrin will do everything in his power to ensure they are together forever. In his heart, she is the only lady for him.
Amazon | Barnes & Noble | Smashwords | Diesel | Apple/iTunes |Print | Kobo
By Vonda Sinclair at August 05, 2014
Email ThisBlogThis!Share to TwitterShare to FacebookShare to Pinterest
Labels: Dunnottar Castle, Scotland travel, Scottish Castles, Scottish historical romance, Scottish history, Vonda Sinclair

Love this post; full of nice details and gorgeous pictures. As always!!

As always, the pictures are wonderful! One day....

Thank you both, Jean and Alanna!! So glad you like them. Hope you get to visit.

Thanks for inviting us to go along with you, Vonda. Your gorgeous photos brought back those memories I hold from several years ago. Like I said last time, one of my favorites after Eilean Donan. :)

Wow, that's pretty fascinating stuff. And as for the photos, that green is incredibly brilliant! Great job, as usual. :)

Isn't it a wonderful and spectacular place, Paisley? I hope we both get to go back soon.

Thank you, Randy! The green in Scotland is very brilliant and unbelievable.

This one is so dramatic and so close to the sea. I love the photos - I have not been to this one, so appreciate being able to see it through your eyes. In what part of Scotland is it located?

Thanks, Sherrie!! It's two miles from Stonehaven on the east coast, in Aberdeenshire.

Dunnottar is a beautiful castle ruin. I visited the ruin on this last trip and climbed all those steps, but loved experiencing the castle.

I'm late to appreciate. LOL. but I love the photos of this castle!

It's a wonderful place, Brenda. Thanks for checking out my post!

Thank you, Tamara! I'm glad you liked them.