Hi, everyone,
I'm thrilled to announce that My Fierce Highlander won an EPIC Award in the historical romance category this past weekend! It was announced at the EPIC conference. Since they knew I wasn't attending, they mailed the award to me. Wow was it a thrill to open the box on Friday and pull this out! :) 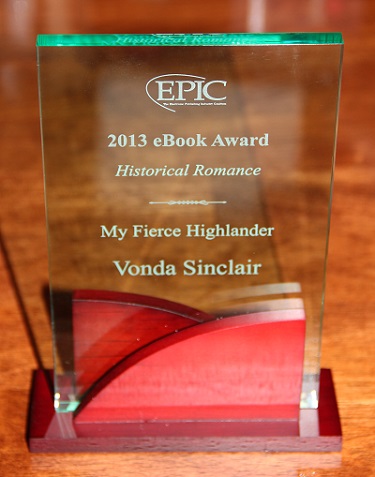 It's my first award as a published author and an incredible honor. I'm thrilled the judges enjoyed the book. Judges, if any of you are reading this, thank you!!!

For those who haven't read the book yet, here's an excerpt: 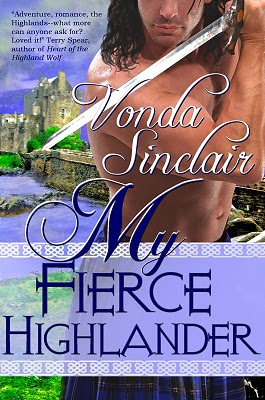 So happy for you, Vonda! Congratulations!!

Thanks so much, Dawn and Susan!! It is a thrill for sure.

Congrats on a well-deserved award for an awesome story!!

Congrats again Vonda. And just how did you get a good picture of the award? I've been trying to take a pic of mine and the glare keeps getting in the way.

Lori, thanks!! And congratulations on your EPIC award too!! I used auto on my dslr camera and took it at a slightly downward angle, focusing on the EPIC part. I took a few others and some were blurry. Hope you get a good pic!

Thanks tons, Carly and Natasha!! Still dancing a Highland jig over it. LOL

Congratulations, Vonda!! Your highlanders rock, so no surprise :)

Congratulations, Vonda! You deserve it!! It's a fantastic book!!

Aww thanks so much, Abby and Vanessa!! That means a huge amount to me!! :)

That is one gorgeous award, Vonda. I'm delighted for you. Congratulations!

I am so happy for you. Off to download...

That's so awesome! It sounds wonderful. A must-read! Will take a copy on vacay with me. :)

What a beautiful award! Congratulations on the win!

Nancy, wow thanks so much! I hope you enjoy it. :)

Cameo, I'm thrilled you liked the sound of it! Hope you enjoy! :)

Anna, thank you! I have fun staring at it from time to time. LOL