Castle Stalker (Caisteal an Stalcaire) sits in one of the most dramatic and beautiful settings in Scotland, on a small island (or islet) known as Cormant's Rock in Loch Laich, just off Loch Linnhe in Port Appin, Argyll, Scotland. If you're traveling there, it's midway between Oban and Glen Coe. This is one of my favorite castles to photograph and so far I think I've stopped every time I've passed it to take pics. Still waiting for that sunny day setting with some blue sky. :) But my favorite evening taking photos there was when sunbeams were slicing through the clouds. As we were approaching, I glanced out over Loch Linnhe and saw this dramatic nature show. (The clouds and sunlight never do this in the US where I live.) I had to stop by the loch and take pics and so did about 4 other car loads of people who were just as awed by the sight as I was. 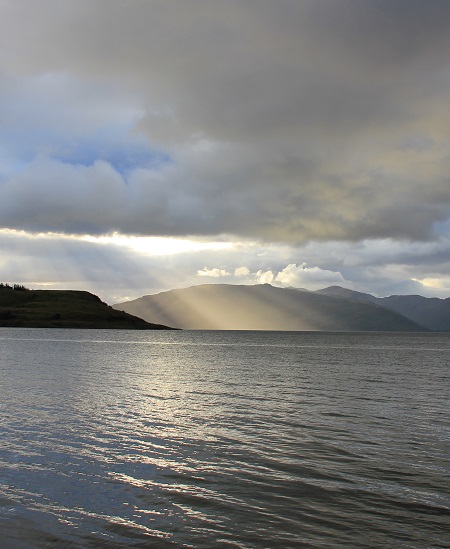 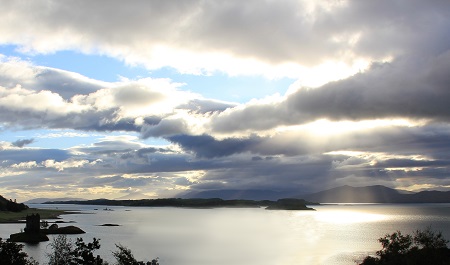 A few minutes later when we arrived at the Stalker View Cafe, which is a good place to take pics from, the sunbeams were still lighting up the loch as if a spotlight was shining down from the heavens. You will see the castle in the lower left corner. 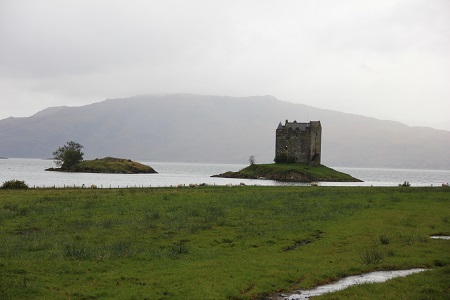 Another day, we passed the castle again and I drove down a small road to get a different angle. 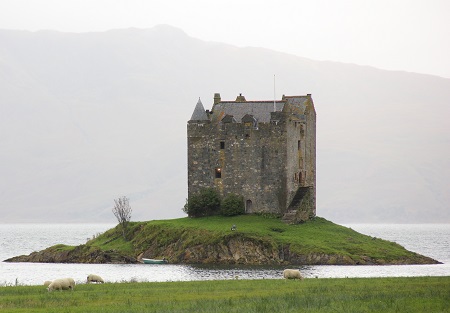 Stalcaire or Stalker means hunter or falconer. Even today in Scotland, deer hunting is called deer stalking. We didn't get to visit the castle because a boat is required. The castle is fully restored, habitable and privately owned. A few tours per year are available.


Castle Stalker as seen today is original from the 1400s. But before Castle Stalker, the MacDougall Clan, Lords of Lorn, held a small fort on the islet, which is great for defense, in the early 1300s. The MacDougalls lost this title because they were defeated by King Robert the Bruce at the Battle of the Pass of Brander in 1308. They regained the title and lands after 1328 and held it until around 1388 when the Lordship of Lorn passed to the Stewarts along with the site where Castle Stalker sits.

Most sources state that Castle Stalker as seen today was built by Sir John Stewart, Lord of Lorn, in the 1440s. The castle was built by expert stone masons who constructed parts of the walls nine feet thick. They also built a dungeon beneath it and there is still a record of those who were held here. 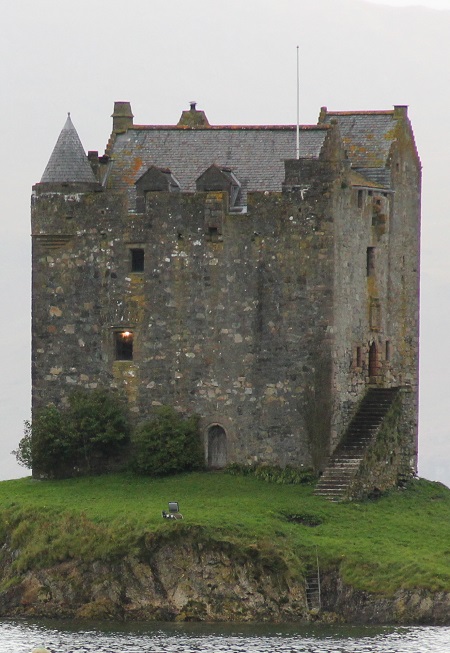 Sir John Stewart is known to have had an illegitimate son, Dugald, in 1446. In 1463 he wanted to make his son legitimate by marrying his son's mother, a MacLaren, at Dunstaffnage, a castle near Oban. (See below.) But John was attacked and mortally wounded by Alan MacCoul, a MacDougall, because he and a large group of men were trying to prevent John from continuing the Stewart line. John Stewart did live long enough to marry the mother of his son, therefore making him legitimate so he could inherit.

There was a lot of plotting and political manipulation going on at the time between many clans because the Lord of the Isles, who held a lot of power in the west, had a major conflict with the king. And of course, the Stewarts of Appin being both powerful and loyal to the king were seen as a threat. It is believed that the Lord of the Isles was behind the assassination of John and that others who went along with the murder plot could have been Colin Campbell, Lord Argyll. The murderer, Alan MacCoul was the illegitimate grandson of an earlier MacDougall chief.

Dugald Stewart became the first Chief of Appin. But he lost the title of Lord of Lorn because of his uncle, Walter Stewart's treachery and plotting with the Lord of Argyll. Walter ended up with the title but with no authority. A battle took place in 1468 across from the castle called the Battle of Stalc in which the Stewarts banded together with the MacLarens and defeated the MacDougalls and MacFarlanes (acting in the interests of Colin Campbell and Walter Stewart.) Dugald himself killed his father's murderer, Alan MacCoul. The MacFarlanes were defeated and never able to fully recover. The outcome of this battle solidified Dugald's claim to Appin. This area was formally granted to him by King James III on April 14th, 1470.

King James IV and V were cousins of the Stewarts of Appin and often traveled to Castle Stalker to hunt. Duncan Stewart led the clan until 1512 when he was murdered by the McLeans. His younger brother Alan succeeded him. He and his five sons fought in the Battle of Flodden and all survived, though the king didn't.
The Stewart clan held Castle Stalker until 1620 when the Campbells of Airds acquired it in a drunken wager by the 7th Stewart Chief, Duncan, in exchange for an eight-oared wherry or beorlin (a rowboat). The Stewarts, under Ardsheal, regained the castle in 1689 when they sided with King James VII (and II) against King William. After their defeat at Dunkeld, Castle Stalker again was to be granted to the Campbells. But the Stewarts refused to give it up. The Campbells lay siege to the castle for several months until the Stewarts were granted an honorable surrender in 1690.

In the Rising of 1745, Castle Stalker was held by the Campbells and a garrison of 59 government troops. The Stewarts (Jacobites on the side of Bonnie Prince Charlie, their very distant cousin) attempted to take the castle with a force of 300 men but the castle proved too strong with its thick walls. At the famous Battle of Culloden, Charles Stewart of Ardsheal led a company of 300 men from 19 clans. The Appin Regiment suffered 92 killed and 65 wounded. After the Battle of Culloden, the government used the castle as a center where Jacobite Highlanders had to surrender their arms. And Stewart of Ardsheal went to Europe.

The Campbells lived in Castle Stalker until around 1800 when they built a new house on the mainland at Airds. Castle Stalker became a storehouse. Around 1840, the roof fell in or may have been removed so the owner could avoid paying a roof tax. The castle was abandoned until 1908 when Charles Stewart of Achara purchased it from the Campbells and did some preservation. In 1965, Lt. Col. D.R. Stewart Allward purchased the castle and spent ten years personally rebuilding and restoring it as it is today. It is now owned and run by his children and grandchildren.

I hope to one day take the boat trip over to visit Castle Stalker. That would be a major highlight.

Thanks for taking this little trip to Castle Stalker with me!
:)
Vonda
www.vondasinclair.com

I look forward to your Scotland posts and love the beautiful pictures.

Thanks so much for looking at them, Clover!

LOL Angelyn, yes, it was in that movie. It was also featured in Highlander Endgame.

OH, Vonda, these photos are so beautiful and I want to go NOW. We were in the area, but didn't see this beautiful castle. Thank you for sharing, my friend.

Paisley, The castle is hard to see from the road because of bushes. You have to be really looking for it and know where to pull off. I hope you get to see it one day soon! I love it there. Thanks for checking it out!

More amazing pictures, Vonda! Interesting story, too. But I can't help but think that at some point since the 1400s someone must have fallen off those stairs at Castle Stalker and rolled down into the water. :-)

Beautiful pics, thanks for sharing. Reminds me a little of Mont St-Michel in France.

LOL Vanessa, they probably did, especially if they indulged in too much whisky. :)

Thanks, Carole! I would love to visit France sometime.

What a romantic setting, and it looks so peaceful. Hard to believe the history was anything but peaceful. Thanks for posting the history, I enjoyed reading it.

Your book cover is fabulous!

Wishing you lots of success with your book!

Gorgeous pictures! I have this castle on my latest book cover and I was THRILLED when I saw it. I knew it right away! I hope to get here someday!

Thanks so much for commenting, Gemma! Yes, it does look peaceful there now doesn't it? The Highlands are incredibly serene and quiet now. But I always try to close my eyes and visualize what it was like there 400 or 600 years ago. I'm so glad you like my cover. Thanks!

Alexa, thanks! How cool! I love that the castle is on your cover. It's a beautiful setting! I hope you get to visit soon!