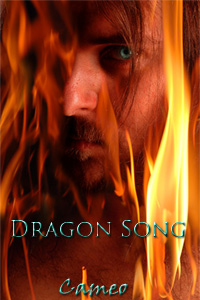 I’m so excited! The reprints of the first three novellas in my Dragon Song series are now available, all bundled together in one book, for Kindle. They’ll also soon be available through Barnes & Noble and Kobo as well as in print. Simply titled Dragon Song, the collection was just released this week, and I’m really happy with how stories are packaged and with the cover art. Love this guy’s eye color!

Also, I invite you to join me at Barbara Vey’s Anniversary Bash. Today’s celebrated genres include inspirational, YA, graphic novels, and nonfiction; however, Friday is the day for erotica--I'll be there!--and Saturday is the romance blow-out (I can't wait!). I’ve been bopping in and out all week and commenting for a chance to win some great prizes from authors, editors, publishers, and bloggers, and I'm getting some great tips on new reading material and having a blast with the wickedly imaginative virtual party-goers. There’s lots of fun there for every kind of reader, so please feel free to join the party. Even if you missed skeleton band I brought Monday--the Wicked Trochee Spondee karaoke band--there's still time to enjoy the bash as it lasts until Saturday. :)

Hope to see you at the party. Until then, if you’re into dragon-shifters, why not check out Dragon Song? The description of each story is below. If you need more info, just drop me a line. Happy reading!

The Dragon’s Shepherdess
The Shepherdess of Dozah’s determination to save the dragonkind is tested when she clashes with Reiz, a warrior king whose sole purpose is to acquire the dragonling that Shepherdess refuses to relinquish. When she willingly offers herself to him in exchange, their physical union will uncover dangerous passions and threaten to expose the dragon secret that binds them.

The Dragon’s Healer
Nioral, healer dragon of the Kilsh Brood, spends his days collecting roots and mixing potions until a trip into the forest changes his life forever. True to his calling, he rescues Merigone, a bewitched beauty injured while trying to escape greedy villagers. A healer herself, Merigone awakens in Nioral a deep passion such as he’s never known, and he finds himself torn between keeping the dragon secret and succumbing to his desires.

The Dragon’s Scribe
Emerson, who edits dragon fantasy when she’s not looking for the perfect mate inNew York City, wants a man who can dominate her and fulfill her every fantasy.Unfortunately, that man is Mojogan, a warrior dragon-shifter intent only on finding his lost niece and returning to the Time Before. When an operational glitch lands Mojogan in Emerson’s bedroom, he finds a sexy human woman who craves domination as much as he craves her submission. He’s determined to keep the dragon secret safe, and she’s determined to protect her heart. Only when they give in to their passion will they discover the key to fulfilling the prophecy that will ultimately decide the fate of the dragonkind.
By Cameo Brown at March 14, 2013
Email ThisBlogThis!Share to TwitterShare to FacebookShare to Pinterest
Labels: Cameo Brown, Dragon Song, dragon-shifters, dragons, fantasy, The Dragon's Healer, The Dragon's Scribe, The Dragon's Shepherdess

Congratulations on the release of the new collection! I love his eye color too.