Oh Christmas Tree...Falling Down on Me 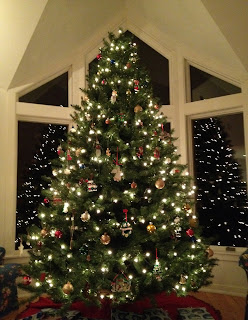 Our goal for the Christmas tree is to have it stand up straight, be beautiful and festive. Its goal is to fall over dead.


Our first tree fell down in the middle of the night. The good news is it fell over on the night of Christmas Day, so we'd already had the gift opening on Christmas morning. The bad news is that it fell onto a hardwood floor. We lost many fragile, sentimentally valuable ornaments. The scary news is that it keeled over in the middle of the night, breaking said ornaments, and no one heard a thing. We woke up the next day to find it lying on its side in the midst of brightly colored, shattered glass.


We thought that was an isolated happening. But the next tree that fell over did so before Christmas Day. Luckily, we'd placed this tree on a carpet so the ornament damage was minimal.


The third tree fell over Friday night, minutes after we finished decorating it. We were all sitting there enjoying it. It really is a beautiful tree. When, slowly and majestically, it fell to the ground. We had a brand new tree stand. A big one. It stuck with the tree all right. And all the water that had been in the stand spilled onto the carpet.  Luckily, we keep a big plastic tarp under the tree but it did spill onto the red felt tree skirt that I keep on top of the plastic.


The first comment was from my husband. "At least we're here to deal with it," he said. "That was good luck."


"Nothing says luck like the Christmas tree falling over," said kid #2.
So dh pulled the tree up and I held it while hollering for someone to get towels to mop up the water before the red felt stained everything.


Youngest dd had been taking pictures of the tree trimming for her photography class. After the tree was upright again, one of the kids said, "You should have taken a picture of the tree on the floor."


Well, we had a few broken lights and ornaments, but it wasn't too bad. We had a few laughs.


So then dh wired it to the wall (which he'd said he would do earlier and has done before).


It's still a beautiful tree. Merry Christmas to all. 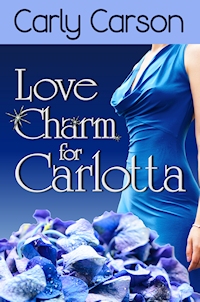 Also in December, I released the third short story in my Love Charm series.
Love Charm for Carlotta: Carlotta doesn't believe in love charms. Especially not when the bad boy hockey player from her past suddenly re-appears in her life. Has the love charm brought him back to her? She doesn't intend to find out. But, in the small town island atmosphere of Martha's Vineyard, it's hard to escape your past. Do people change, or will she be courting heartbreak again if she succumbs once more to her high school sweetheart?
http://amzn.com/B00AHJN4ZW
By Carly Carson at December 16, 2012
Email ThisBlogThis!Share to TwitterShare to FacebookShare to Pinterest
Labels: Carly Carson, Christmas tree, Christmas tree accidents

I know I shouldn't be laughing, Carly, but I mean, what are the chances you'd have a reoccurring tree collapse?

Good luck with it staying up until AFTER Christmas. And oh, too cute about the FB posting. Shows where priorities lie... :)

Our cats think an indoor tree with climbing branches and sparkly, jiggly decorations is the... cat's meow. They've toppled trees,with similar catastrophes to irreplaceable ornaments and lights. One solution? Tether the tree top to an anchor on the ceiling. Another is to arrange the tree on the deck so it is visible through double windows. The final solution? Set the tree up at our son's, sans cats.

Terry, I think the problem is we like a big tree. Then we put lots of ornaments on it and well, gravity has its way. I told my teenaged dd a dirty joke the other day. While she was still rolling on the bed laughing, eyes closed, her hand was patting the bed, looking for her phone. "What are you doing?" I asked. "I need to tell it to my sister." It's instinct with them to share immediately.

Ana, we do the tether thing now. For some reason, hubby likes to think he can avoid it every year. Of course, he has to do the work so I don't criticize. The dog gives the tree a respectful wide berth. Not like a cat. I would not do the set it up at someone else's house! lol I like my tree.

While reading,I felt like I was watching a sitcom. But, I love that picture. That is a seriously beautiful Christmas tree. Happy Holidays!

Angela, Ha! Sometimes I do feel like my life is a sitcom. Not always in a good way. lol. Thanks!

We had a tree fall on our dining room table and take a quarter-sized chunk out of it--right through the polish, varnish, the stain, and into bare wood. Argh! Needless to say, that was the last real tree we had. But I do miss the piney scent. Sigh.

Joan, that's too bad! I didn't know a Christmas tree could do that much damage. My neighbor had a ceiling fan fall on the dining room table and that wasn't good either. Plus I never wanted a ceiling fan after that. The scent is nice, but it doesn't last as long as I'd like.