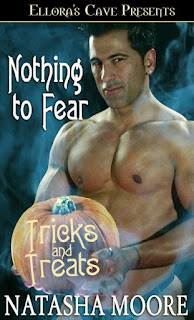 And a little excerpt for you:

“I have to tie you to the bed now,” he said smoothly, picking up the first length of rope. He lifted her right arm and ran his hand along her skin from shoulder to wrist, his fingers causing hot shivers to run in their wake. His fingers easily ringed her wrist. “I have to make it tight enough that it won’t come undone while you’re thrashing about.”

The thought of thrashing about underneath him made a hot flush sweep over her body. She swallowed. “Do what you have to do.”

The rope wasn’t as rough as she thought it would be. He wound the other end around the tall bedpost, and gradually stretched her arm almost straight up and to the side, then tied it off.
“Okay, give it a pull. Will it come loose?”

Kelly yanked with all her might, but it didn’t give a bit. Mason nodded and glanced at his watch.

He grabbed another length of rope and ran his hand down her leg, starting up at her hip, smoothing out the skirt of her dress as he went along. When he reached the bare skin of her calf, she shivered at his touch. He reached her ankle and lifted her leg a bit, looking at the sparkly pumps with the high heels. “Hot.”

She wanted to blurt out that they weren’t her shoes. She’d never owned anything so blatantly sexy. She’d been raised to never draw attention to herself like that. But she couldn’t force any words out of her mouth at the moment. She could only feel his hands on her leg, the rope slowly wrapping around her ankle, the gentle tug as her leg was stretched out and Mason secured it to the bedpost at the bottom of the bed.

He slowly rounded the bottom of the bed. She may have been covered with this cotton dress, but she felt naked as his gaze roamed over her body. He caught her left foot with his hand, lifting it from the mattress and rubbing his hand over the high instep, the arched top. “I love you in these shoes. You never wore shoes like this when you were with me.”

“They’re Lisa’s shoes. I don’t own a pair of shoes like this.”

You can download your own copy of Nothing to Fear through the links below and at other e-book sites:

Have a great Monday!
Natasha
Plaything - Coming May 8th!
www.natashamoore.com