A Visit to Plockton in the Scottish Highlands 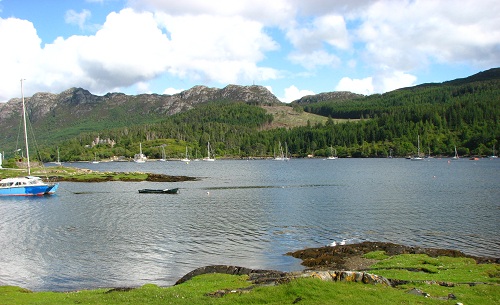 Plockton is a beautiful small village in Wester Ross on the northwest coast of Scotland. It sits in a sheltered bay on the edge of Loch Carron not too far from the ocean. Plockton is also a National Trust for Scotland conservation village, which helps preserve its heritage.

The day we visited was an incredibly beautiful, sunny day. We hadn't actually planned to visit Plockton but we'd gone on a sightseeing cruise and the captain recommended it since it was only five miles away from Kyle of Lochalsh. 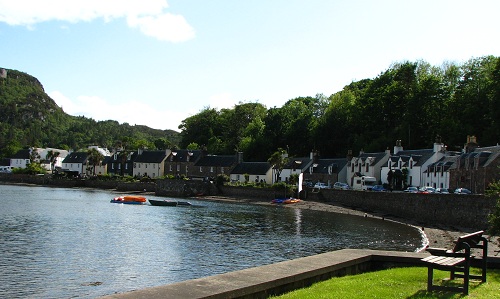 Plockton is one of the most attractive, picturesque villages in Scotland.  Since the BBC series Hamish MacBeth was filmed here in the mid 1990s it's been a popular tourist attraction. There are a number of hotels and B&Bs here to choose from. 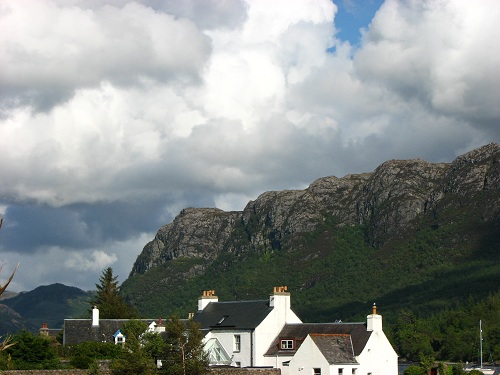 As you can see from the picture below, the main street is very narrow but it is two-way. Driving down it is an adventure in itself since you have to watch out for pedestrians and oncoming cars. And miss the parked cars. Fortunately, every few parking spaces is a pull-off space designed for passing oncoming cars. 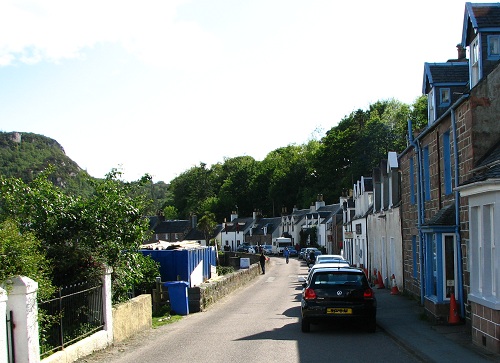 Plockton was originally known as Am Ploc. It was a crofting hamlet until the end of the 1700s. But during the Highland Clearances, landowners urged people off the land so they could make more money grazing sheep. Plockton became a port of embarkation where people whose families had lived here for many generations left for the New World. 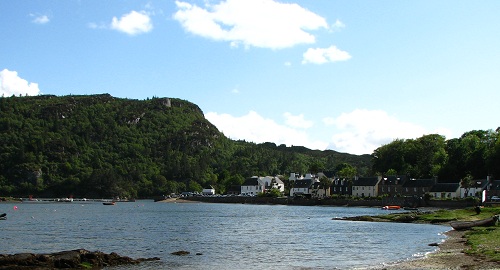 In the 1800s, Sir Hugh Innes, the landowner, developed a new fishing port called Plockton. During this time there was a "herring boom" and as many as 500 people lived in Plockton. But the herring boom soon ended and the potato famine struck in the 1840s. After that the village was known as Baile na Bochdainn, or "village of the poor." 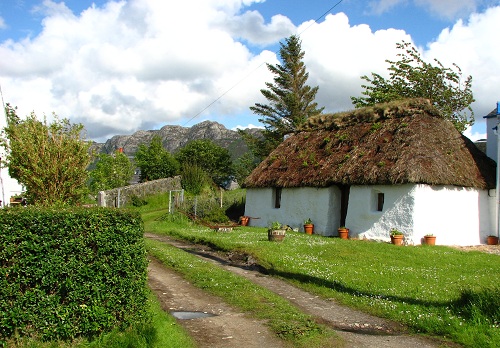 The railway came in the 1890s which helped the local economy. Today, Plockton is popular with artists. And there is an annual Plockton Regatta held for two weeks in late July/early August. Check out this view! This is where we sat to eat a spontaneous lunch of fish and chips at a picnic table. It was definitely one of my favorite days in Scotland and finding Plockton was like finding a hidden treasure. 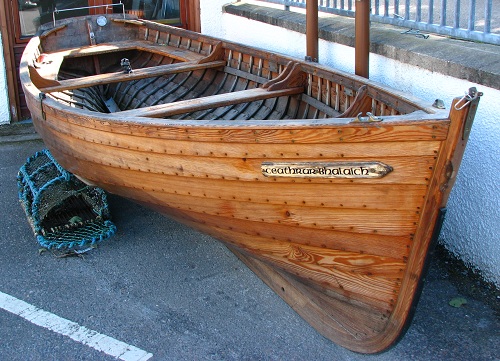 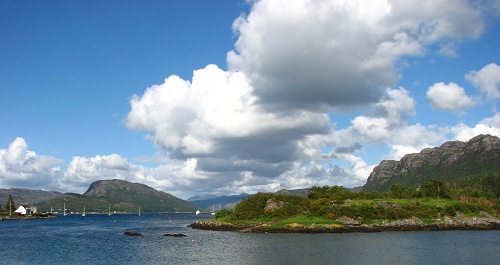 Thanks for checking out my pics and visiting Plockton with me!
Vonda
www.vondasinclair.com
By Vonda Sinclair at November 08, 2011
Email ThisBlogThis!Share to TwitterShare to FacebookShare to Pinterest
Labels: Plockton, Scotland travel, Scottish Highlands, Scottish romance, Vonda Sinclair

Beautiful pictures. I can see why it's protected. How many people live there today?

Wow. Beautiful. You must have had an awesome visit. Thanks for sharing with us!!

I visited Scotland for the first time this year and fell in love with the country.

Hubby and I were in the small towns of Invergordon and Portree and I liked them much better than the cities.

I'm setting my next YA in Invergordon. Took lots of pictures. I thought it was perfect. Absolutely. Perfect. We had fish and chips, too. And rhubarb and raspberry torte.
I want to go back!

Thanks Linda! From what I can find out, the population now is around 378. This is probably permanent residents. In summer I'm sure there are many more people than this in town.

Thanks MJ! Yes, it was awesome! I loved it there. I should have mentioned, because of the way the village is positioned, facing east, the winds off the Atlantic don't hit here, even though it's close by. Because of this and the North Atlantic Drift (a continuation of the Gulf Stream) the village has a more temperate climate than most of the west coast of Scotland. I could tell it was a much warmer and protected area. There are a few more of these protected, temperate areas I've visited and the difference in weather and temperature is amazing.

L.j. that's wonderful! I haven't been to Invergordon but I have been to Portree a couple of times and I love it! I also love the villages and small towns much more than the cities. Although Edinburgh is fantastic I wouldn't want to drive in the city. Scotland is very inspiring when it comes to stories!

{Sigh} Wish I could magically transport myself there!

Gorgeous pictures (as yours always are). It looks so relaxing!

Randy, I wish I could do that too!

Tamara, thanks! It's a perfect little hideaway.

Beautiful photos, what an awesome place to visit.

thanks for sharing these with us!

You just took me back to a magical day..hubby and I loved stumbling across this village after a harrowing narrow road to get to it. We caught it at low tide so this is fun to see it with water instead of mud. The hotel has been repainted as it was trimmed in black when we saw it four years ago. Thanks, Vonda. Smiling big - and to top it off, today we spent hours with English friends we met in Oban on our same trip. Took them for a tour in the Jelly Belly factory which was lots of fun.

We were told the village attracts a lot of celebrities because it is remote and difficult to get to.

Thanks for the tour. YOu always make it real by bringing up some quirky detail like the pull off space for passing cars. I mean, who would know that unless you were actually there!

Marilyn, thanks! I'm glad you enjoyed it!

Paisley, how cool! I'm glad you and your hubby visited the village. Isn't it the neatest place? I'd like to go back with more time so I could explore shops or gardens I didn't get to see. I'm glad you enjoyed your day with your friends!

Julie, thanks! The quirky details are fun and I love looking for those.

Very beautiful photos. Thanks for sharing.