Releasing March 15th, HOT SILVER NIGHTS, a multi-author anthology featuring romances with characters aged 40+, has something for everyone. My novella, Lucky Me, is part of my Silver Fox Romance series, but it can be read as a stand-alone. 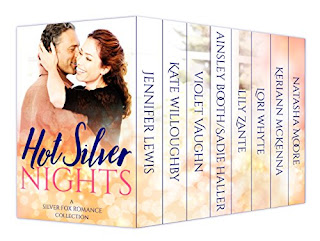 Where are the romance books about older people like me? They're right here! Join us in the celebration of love later on in life. We won't let the fine lines of time interfere with the joy and happiness romance can bring, so sit back and relax with brand new stories never released from USA Today bestselling authors in the Hot Silver Nights collection.

And here's a teaser from Lucky Me!


Just get it over with.

Diane Varney pulled her old Buick into the long driveway leading to the two-story gray house on the outskirts of Best Bay. It had been called the Harper Homestead for as long as she could remember. The driveway was plowed, the walk shoveled. It looked like Jason was doing a good job helping his father while he was down. Ford had to be going crazy not to be able to do it himself.

The sunlight glittered off the smooth expanse of snow behind the house, and the sky was that brilliant blue that seemed to appear only on crisp winter days like this. The texture of the clouds overhead made her fingers itch with the desire to capture the scene.

There’d been a time when she carried a sketch pad with her all the time, when every moment was an inspiration. It had been so long since she’d indulged her creativity she worried it was too late to recapture. But her appointment this afternoon wasn’t what was causing the nerves zinging through her body at the moment.

Diane picked the take-out box off the seat beside her and got out of the car. After the damned fool had his accident, she’d heard that nearly every single woman of a certain age in the area had high-tailed it over here, offering home-cooked meals, baked goods, and who knows what else to the injured widower.

Diane had made sure she wasn’t part of that crowd.

But here she was, stopping by with food after all. Diane pushed the doorbell and heard it echo through the house. Ford had to have expected Jason to come back with his lunch, but he didn’t answer the door. Of course, his son probably would have walked right in.

Couldn’t Ford get around well enough to come to the door? Had all those other women simply walked into the house with their cakes and chicken casseroles? Diane rang the doorbell again. When there was still no answer, she began to worry. What if he’d fallen again? What if he was lying unconscious or bleeding?

She tested the doorknob and it turned in her hand. Her heart began to race as she pushed it open slightly. “Ford?” she called out hesitantly.

“Well, get in here.” His deep, gravelly voice rumbled through her system.

The front door opened into a large foyer. The last time she’d been in this house was after the funeral of her old friend, Irene, who died suddenly of a brain aneurysm. How many years ago was that now? Diane kicked off her boots, hung her coat on a hook by the door and then headed into the hall that ran down the middle of the house. Pictures of members of the Harper family going back several generations covered the walls of the narrow space. “Ford?”

Following the sound of his voice, she turned right into the living room. He sat in an old recliner, wearing a gray T-shirt and black gym shorts. His legs were raised, one encased in a cast from toe to thigh. Her gaze finally made it past his broad shoulders and she caught a glimpse of the face that she’d thought was amazing when he was younger and had simply improved over the years.

She swallowed. Butterflies in the stomach was a cliché for a reason.

His thick hair was now a shiny silver and the wavy strands were tousled as if he’d run his fingers through them. He obviously hadn’t shaved in a few days and if she’d been close enough she might have reached out to brush her fingers along his light scruff before she realized what she was doing. His blue eyes didn’t sparkle this morning as much as they used to. Dark circles gave away his lack of sleep.

His lips lifted in a small smile. “Hey, Di. What are you doing here?”

She was going to ignore the butterflies. “You look like shit.”

He barked out a small laugh. “I could always trust you to cut out the bull.”

She set the take-out box on the arm of the long, upholstered sofa. The small table beside his chair had a stack of dirty plates. Three remotes were lined up on one of the arms of the chair. She didn’t see his crutches.

Diane fought the instinct to pick up and straighten. “Jason asked me to stop by with your burger. He had to leave in a hurry.”

“I heard the rescue call go out, thought it might be something like that.” He shifted in his chair and looked around. For the missing crutches, perhaps?

“Need some help?” She couldn’t resist making the offer. She should turn around and get out of there but she couldn’t leave him like this.

He grimaced, his hands gripping the arms of the chair. “I don’t want any help.”

She folded her arms. “I know you don’t want any help, but that doesn’t mean you don’t need some.”

“I’m sick of needing help.” Ford dropped his head back. “Hell, I’m too old for this shit.”

“Don’t tell me you walked under that ladder before you climbed up it.”

“I would never do that.” He grinned then and her heart did a flip. “Just like I’d never open an umbrella inside a building and I always pick up a penny when I find one. You taught me well, Di.”

He was too damn cute but he wasn’t going to distract her. “What were you doing up on a ladder in the first place?”

“The gutters needed cleaning out.”

“You can hire someone to do that, you know.”

His eyes narrowed. “I’m perfectly capable of cleaning out my own damn gutters. I’ve climbed ladders my whole life.”

Thinking about him crumpled at the foot of that ladder made her heart race again. “You could have broken your stupid neck.”

She locked her gaze with his. “And now you need help.”

He shook his head. “All the other women who bring me food are nice to me. They don’t call me stupid.”

“Guess they don’t know you very well.” She used to know him. Back before he married her best friend.