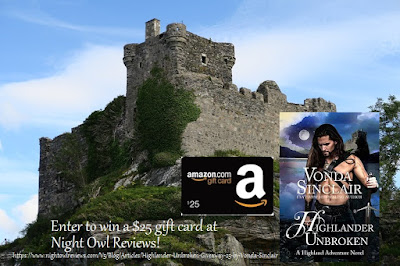 Hi, everyone,
I'm having a giveaway for a $25 Amazon gift card! (US only.)
ENTER by clicking here! 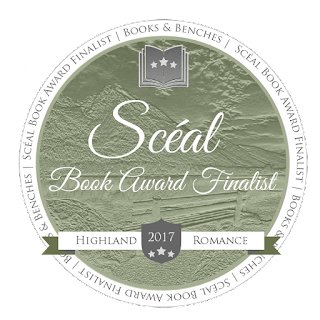 5 stars, Reviewer's Top Pick: "Highlander Neacal MacDonald was a broken man in spirit and body. He was a spy for the King but was betrayed, caught and tortured by his family's enemy clan, the MacRankins. Although broken in body and madness stirring his mind and spirit, he can't fully chase his demons away. Trying to be the best chief for his clan is difficult when everyone has you labeled the mad chief.

Anna Douglas is traveling with a group of ministrels, and has the voice and face of an angel, and she's the only one that can chase his madness away. But who is Anna and who is she running from? What are her secrets? Secrets that can have a devastating effect and can bring death and destruction to everyone close to her. She dares not succumb to the attraction and desire that she feels for Neacal, even though it feels so right.

Neacal can't seem to get Anna out of his mind and every time they are together he feels consumed with desire like never before. Treachery, deceit and a race for time are working against them, enemies death and destruction seem inevitable! Join Neacal and Anna as they fight for their happily ever after! Vonda Sinclair is a magnificent story teller, and she captures every emotion the hero and heroine are feeling. Fast-paced and exhilarating till the very end. Highly recommended."
Maria Rose Dariotis at Books and Benches 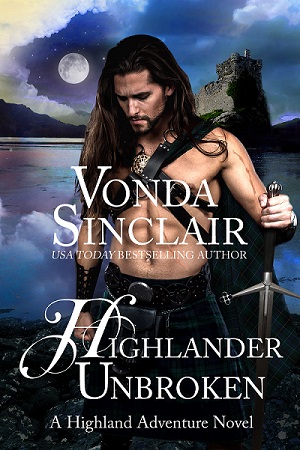 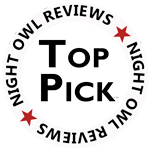 A Night Owl Reviews Top Pick!  "What a great story! Highlander Neacal MacDonald is a man who has been broken in both body and mind after being betrayed and then tortured by his enemies. He's now the leader of his clan but he's struggling to hold on to his sanity while he tries to be the best leader he can to his people. Anna Douglas is traveling with a group of minstrels and she has horrors of her own she's trying to out run. The two are immediately attracted to each other but can they put aside their demons to be what the other needs?
This was so, so good. The story was really well written and the characters felt real. My heart went out to both Anna and Neacal. They had both been through so much pain but were at core really strong people. Their romance was super touching and I was rooting for them all the way.

The plot was fast paced filled with suspense. It was engaging and I couldn't read this book fast enough. It killed me to have to put it down and go adult.

This is the 8th book in this series but I had not read the previous ones but I had no trouble following the plot line. It worked just fine as a stand alone. I had never read this author before and I'm so glad I tried this book. I will definitely be going back to read all the other books in this series."
BookGirl, Night Owl Reviews

Torture has driven Neacal MacDonald to the brink of madness.As the new chief of the MacDonald clan, Neacal will do whatever it takes to honor his late father and to help his clan thrive. But whispers of his madness abound and many in his clan turn traitor, wanting MacDonald of Sleat to lead them instead. Conflict ignites between the bitter rivals when Sleat garners the help of the man who tortured Neacal in the past.Can one woman's song pull him back and begin to heal his soul?Everything has been ripped from Anna Douglas except her angelic voice and the will to survive. When she meets Neacal, she recognizes something familiar in him—stark loneliness and pain. His past could be even more tragic and tarnished than hers. No one must learn her true identity or about the brutish man declaring she is his wife, for he will stop at nothing to reclaim her. Though Neacal vowed to never trust a woman again, he cannot resist the secrets in Anna's eyes or her spellbinding song, which threatens to break down the icy walls surrounding his tormented heart.

Highlander Unbroken is being recorded as an audiobook! :)