Winter in Boston - One for the Record Books 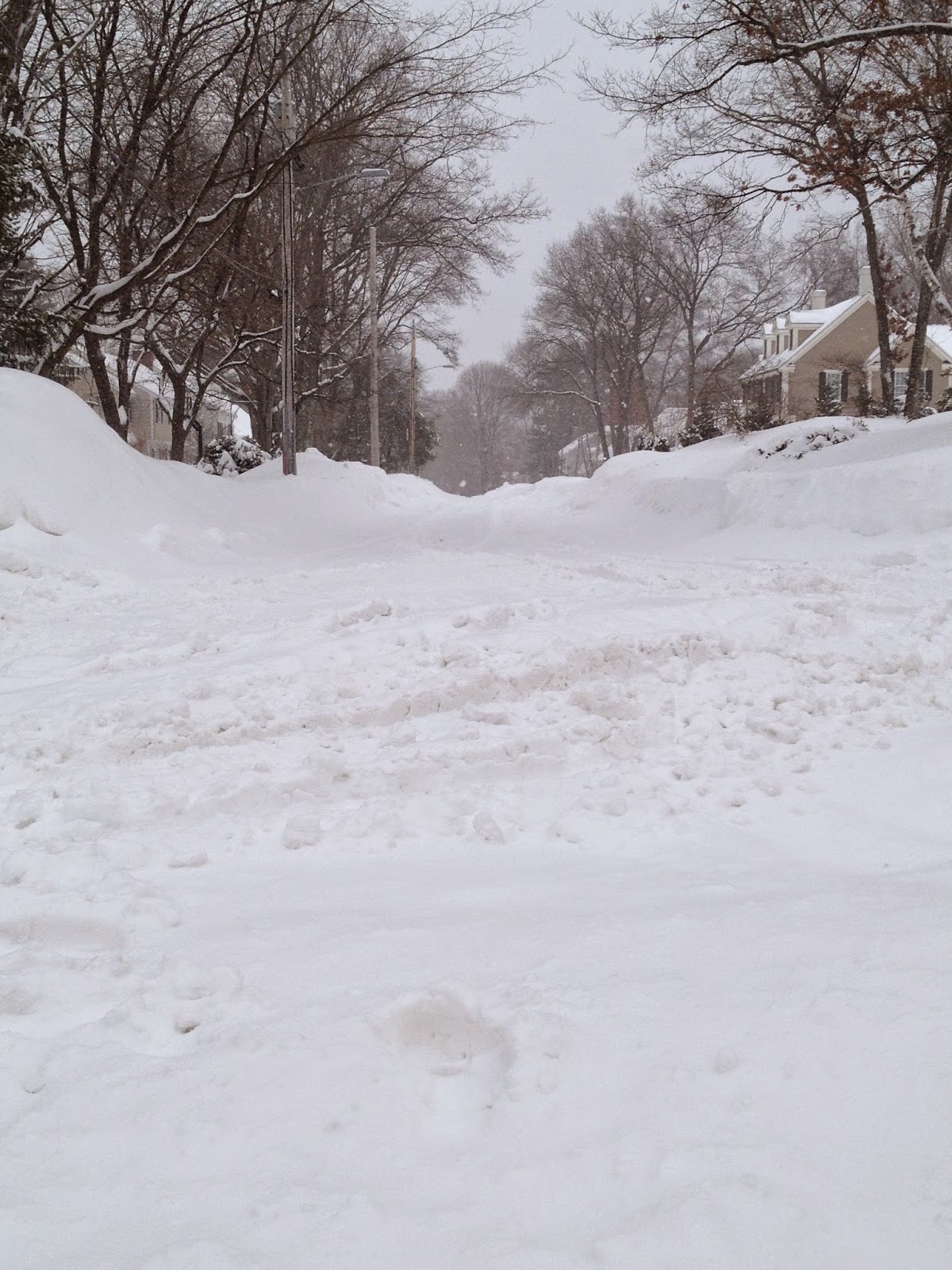 This is the street I live on - after the first snowstorm of 2015. The street is actually plowed. The house you see is showing only the second story poking out of the snow. This is the middle of January.


One week later, a second storm arrives. I don't even remember it. Here is my personal snow tunnel, aka, the front walk. The mailman uses it on the days they try to deliver mail. 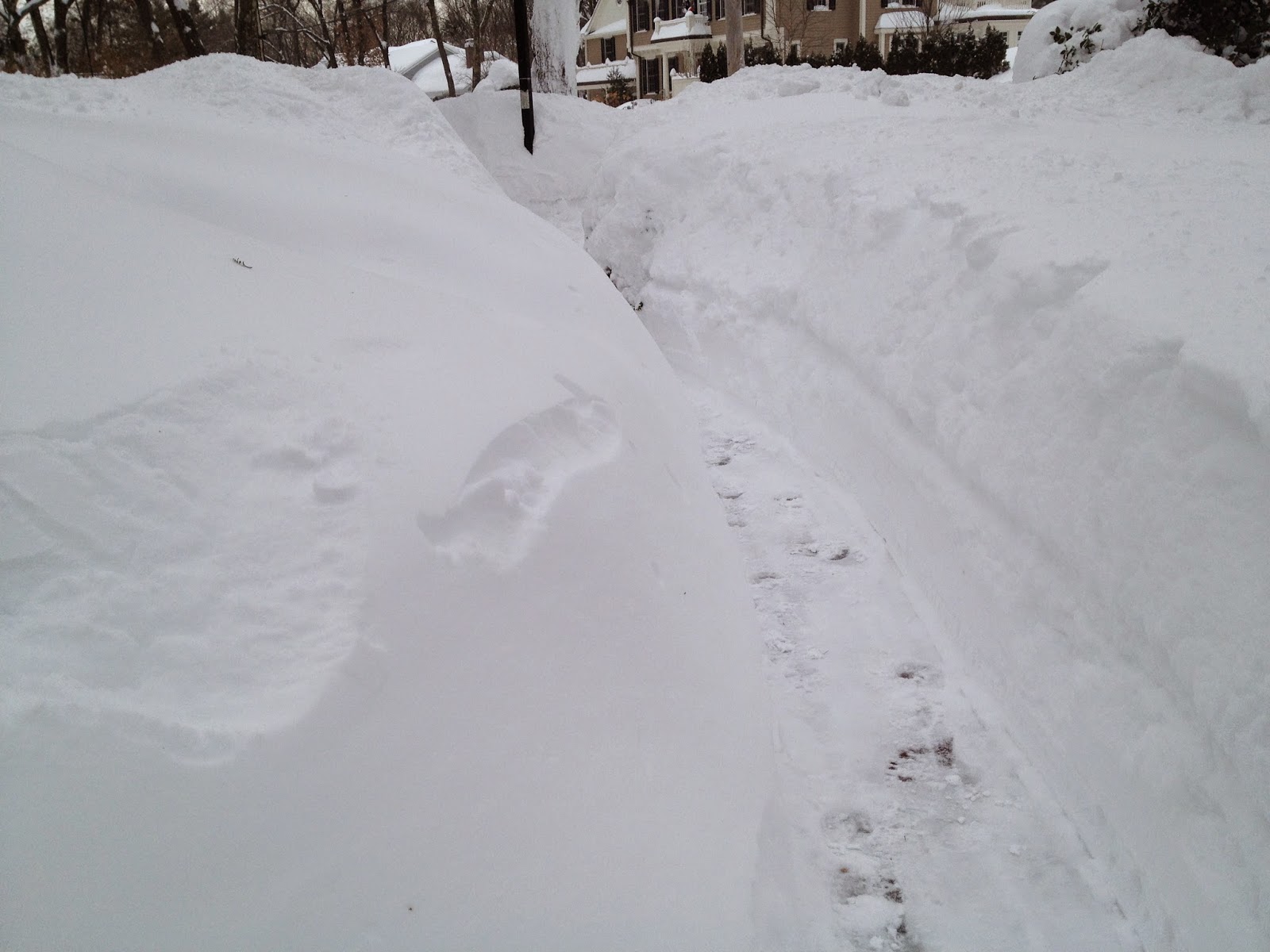 Last week, a third storm arrives. Things are getting serious. Icicles are developing. Icicles lead to ice dams which lead to water leaking inside the house. My husband sets up elaborate systems to contain it. The sound of dripping is not music to my ears. 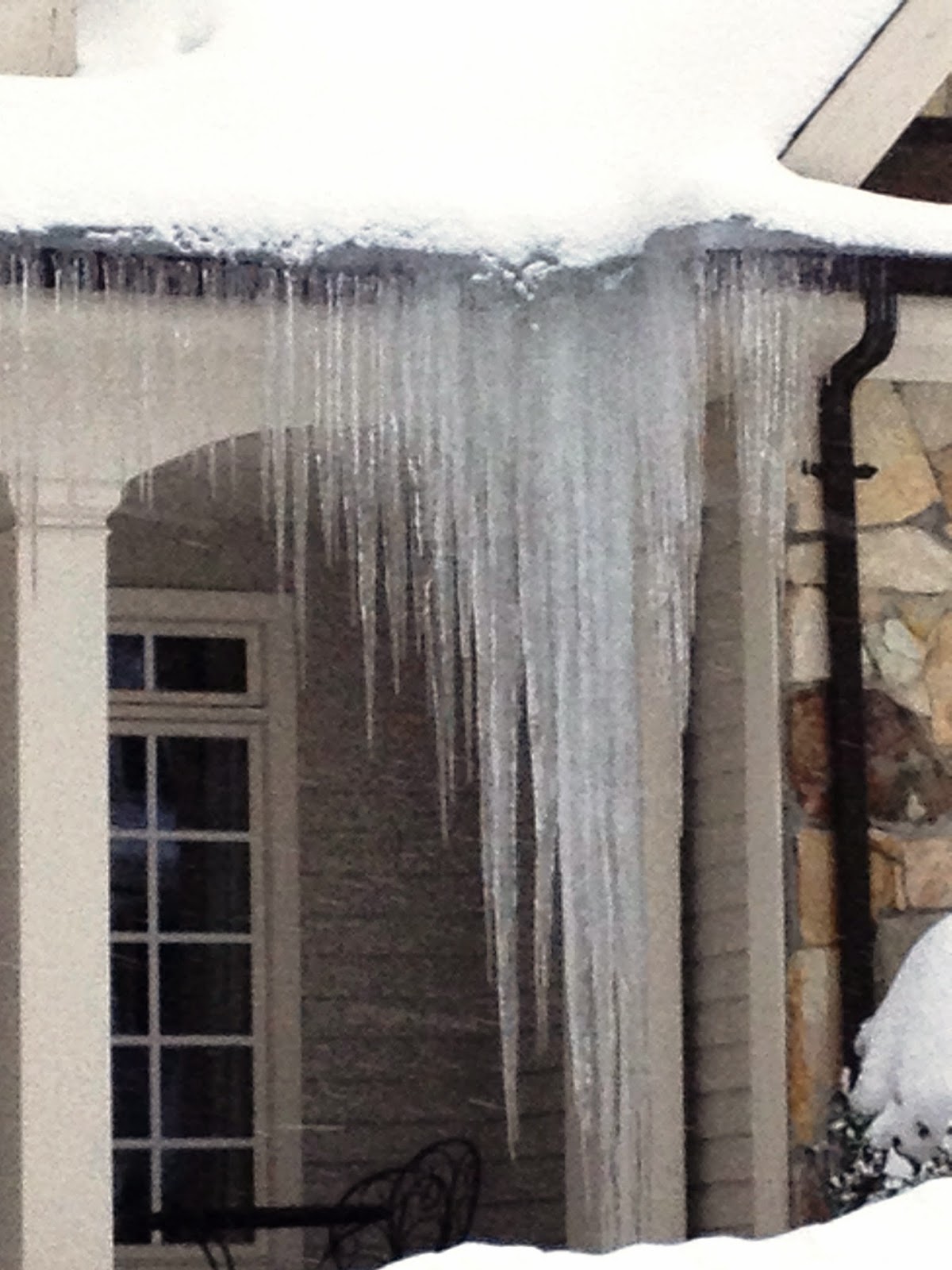 A few nights later, I'm home alone when I discover the lights in the kitchen, the garage and two bathrooms are not working. I'm no scientist, but I am pretty sure that water and electricity don't play well together.

I call the Fire Department to ask if I should be concerned that I have water leaking into the house and my electricity is on the fritz. They insist on coming over, which they do in a large fire truck, complete with flashing lights. (I know I'll be hearing from the neighbors soon.)

Two of the firefighters are Grade A Premium - well, let's say two of them are hot and the third isn't bad either. :) They troop all over my house, including the attic and the basement, causing me to conclude they were bored down at the station. They inform me that my problem is serious, but it's nothing compared to what they've seen elsewhere. Small comfort, I guess. Really nice guys. They leave, lights still not working. (My neighbor calls.)

My husband returns the next day and this is him. 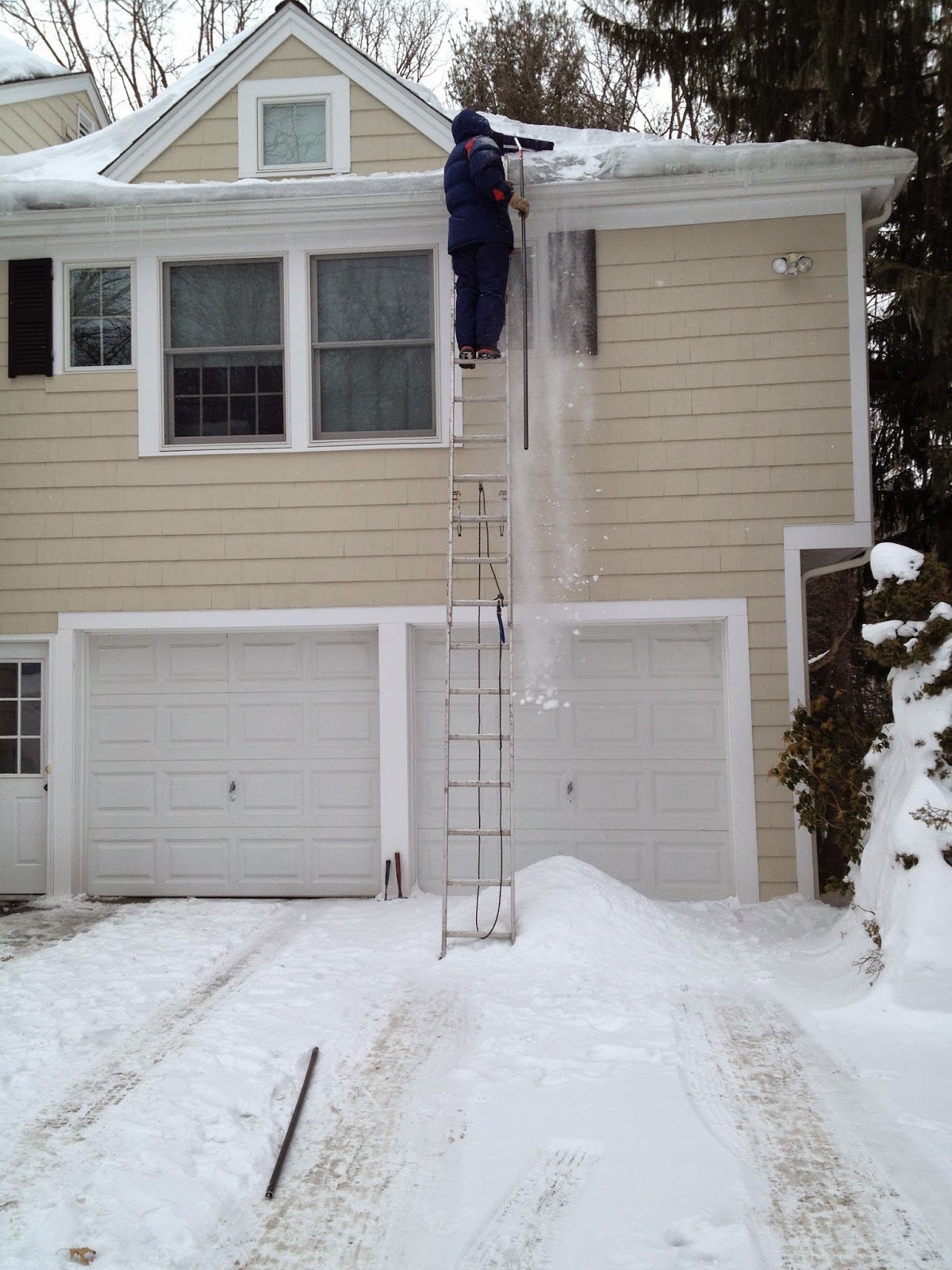 He's on a 24 foot ladder, with a 17 foot rake, trying to get the snow off the roof. He reports that the ice on the roof is a solid foot thick. I hold the ladder, hand him his tools, and keep him company. Happy Valentine's Day. Another foot of snow falls overnight.


I take all the screens out of the windows so I can stick a broom out and knock down whatever icicles I can reach. Hubby tells me to stop before I fall out the window. I discover that many of the windows are frozen shut, so the icicles just hang there and taunt me. "You can't get me. Nah nah nah nah na."

Several towns, including parts of Boston, give up the attempt to keep the streets at their normal width. There is simply no place to move the snow. They turn side streets into one-way streets. All streets going west go one way, east the other. I hope they've posted signs because I am directionally challenged. I have no idea whether a given street is going east or west or, for that matter, north or south.

I think it's snowing. 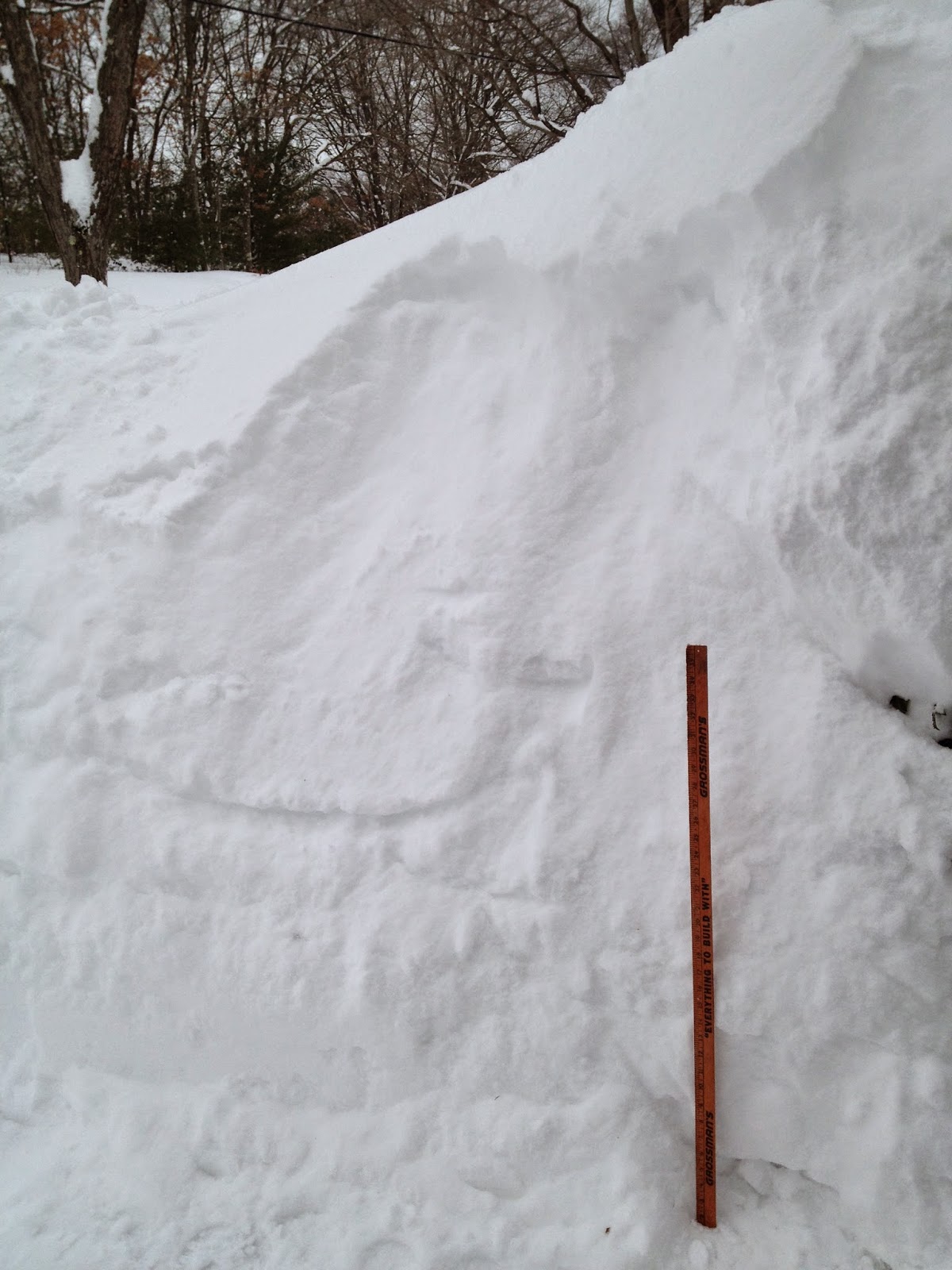 By Carly Carson at February 19, 2015
Email ThisBlogThis!Share to TwitterShare to FacebookShare to Pinterest
Labels: Carly Carson, Winter in Boston