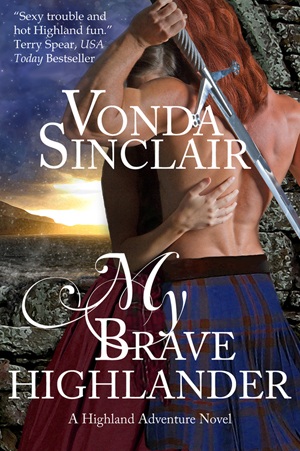 Hi everyone, I'm happy to announce that My Brave Highlander (the third book in my Highland Adventure Series) is out now and available at Amazon, Barnes and Noble and Smashwords. It will be available at other booksellers such as iTunes and Kobo soon.


A man long believed dead, Dirk MacKay returns home to a den of murderous conspirators in Durness, Scotland. Along the icy trail north, he rescues Lady Isobel MacKenzie from a snowstorm. He would never steal the neighboring chief's bride, would he? The tantalizing lady fires up his passions, testing his willpower and honor at every turn, even as some of his own clansmen plot his downfall.

Reviews: "I REALLY enjoyed My Brave Highlander. Lots of action and sensuality--Dirk is so intense and yet when he's near Isobel the heat crackles and his defenses fall. The scenery is vivid and magical. I felt like I was in the midst of the Highlands, the snow falling and melting on my cheeks. Beyond the sizzling sensual tension (which Ms. Sinclair is an expert at weaving!) the adventurous plot had me on the edge of my seat. And Dirk's enemy--HATED with a passion. Ms. Sinclair has the unique ability to pull an emotional response from her reader on every single page.

Filled with romance, I had a constant smile to my face, I got chills, the whole nine yards! This might be my favorite of all three books in the Highland Adventure series. Well done, Ms. Sinclair--I highly recommend this book! And I can't wait to read the next one!" Eliza Knight at History Undressed

"I loved MY BRAVE HIGHLANDER! An intriguing tale of Love, Loss, Betrayal and heart stopping romance! A story you definitely DON'T want to miss! You gotta love those Highlanders!"  A.L. Snider

Excerpt from My Brave Highlander
(On their journey north, not long after he rescues her from a snowstorm, Dirk and Isobel end up having to spend the night together in a small cottage. He knows that Isobel sleepwalks sometimes.)

"Isobel?" Why on earth would she open the door and allow the winter wind to blast into the cottage, especially wearing naught but her underclothing? Dirk hurried across the room, drew her back and closed the door. "What are you doing?"
Her eyes were open but she wasn't looking at him. Was she asleep?
"Go back to bed, Isobel." With his hands on her upper arms, he gently turned her toward the bed.
She resisted and reached for the door. "Going home."
He could understand that, for he wanted to go home, himself. But neither of them could do that at the moment.
Knowing she wasn't going to obey him, he lifted her into his arms. She was light as a wee thistle flower but not near as prickly. He'd helped her mount the horse a few times, but he'd never held her like this, in his arms with her curvy body leaning against him.
When he turned with her, she giggled. The playful sound wound through his body in a heated swirl of excitement. She slid her arms 'round his neck and held on tightly while he carried her back to the bed. One of her soft breasts rubbed against his chest, only the thin fabric between them. She snuggled her face against his neck, her warm breath teasing his skin.
Arousal surged through him, but when she kissed his throat, he thought he might go up in flames. Saints! He wanted to do the same to her, trail kisses down her throat, untie her smock and… He shook his head, trying to clear it.
Standing by the bed, he remained still, though his instincts raged at him to crush her sweet body beneath his on the mattress.
He drew in a deep breath, fighting to calm his desires.
"Are you awake?" he whispered.
She hummed a sleepy sound and placed another wee kiss against his neck. Restraining a moan, he glanced down at her. In the dimness, he couldn't see if her eyes were open or closed. But she smelled heavenly, like lavender and woman.
Just put her in the bed and leave her be!
He lowered her to the mattress but she did not relinquish her hold on his neck. He knew he should simply remove her slender arms, but he couldn't seem to make himself do it. Her breath tickled his face. Her mouth, no less than an inch or two from his, tempted him, made him crave just one taste.
Surrendering to the enticement, he brushed his lips over hers… silky-smooth warmth. She released a soft moan and pressed her lips more firmly to his. It was a chaste kiss, but the raging need storming his body urged him to make it carnal, compelled him to part her lips and slide his tongue between.
Nay. She's asleep.
Lifting his head, he dragged her arms from around his neck and covered her with the blankets. She protested with a petulant moan.
Damn, she seemed near as needy as he was. But was her need for him, or would any man do?
It didn't matter.
"Go to sleep," he said in a low but firm tone, even though she already was.
She turned over and her breathing deepened.
Saints! That was one time he wished she'd done the opposite of what he said. The sensual feel of her lips was now burned onto his.
Nay. He couldn't have her. He couldn't kiss her. She belonged to another man.
My Brave Highlander - Vonda Sinclair

Thanks for checking it out!! :)
Vonda
www.vondasinclair.com

Aww thanks, Maeve!! Glad you liked it!

Thanks Eliza! Yes, you can! I'm having him cloned. LOL

{{{SIGH}}} I HAVE to get back to reading historicals and of course I'll be reading yours when I do!

Thanks, Alexa! I'm so glad I could inspire you to take up reading historicals again. :)

I can't wait to get this one

Aw thanks so much, Casey! If you read it, hope you enjoy! :)