Hike to Old Man of Storr 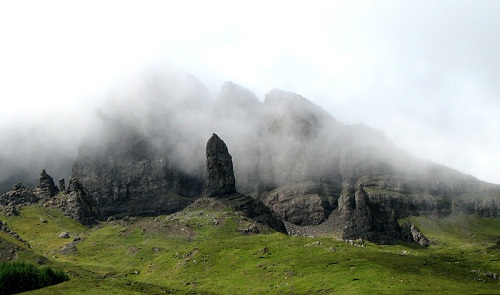 The Old Man of Storr is a geological formation on Isle of Skye, Scotland. It is said to have formed because of a landslip. So basically an ancient landslide which revealed these interesting rock pinnacles. Ancient volcanoes were also involved in the formation.
The first time I visited Old Man of Storr, I only got to stop beside the road and take the photo above and a few more like it. It was amazing because the mist floated quickly and continuously behind the Old Man pinnacle like a low cloud. I also took a video of it. This mist allowed the Old Man to stand out nicely from the background cliffs. 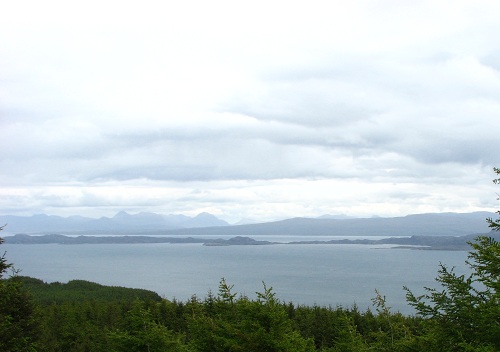 Since my first visit, I'd always wanted to go back and hike up to Old Man of Storr. I was thrilled to be able to do this on our trip last May. We started at a parking area just off A855 north. It is about 6 miles north of Portree. A large forest, a conifer plantation, stands between the car park and The Old Man of Storr so you can't actually see it from there. We walked for a long time up through the forest on a well used path. I'm guessing about two miles up. It's very steep in places and you have to climb up make-shift steps of rock at times. It seemed we'd never reach the top. It must have taken a couple of hours. But when we did finally emerge from the forest, this is the view out over the Sound of Raasay. Toward the north (above) and toward the south (below). Loch Leathan and Loch Fada lie below the forest and the road. 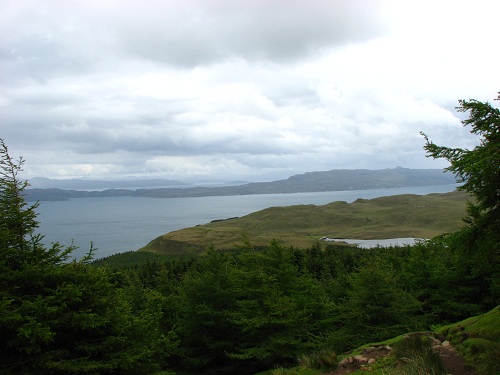 By this time I was tired but we were not yet to Old Man of Storr. Below is our first view of the famous rock formations although it is difficult to pick out the Old Man from the rest of the cliffs at first. The trees at the top were smaller. 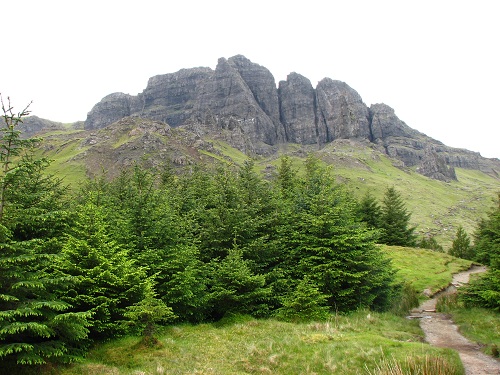 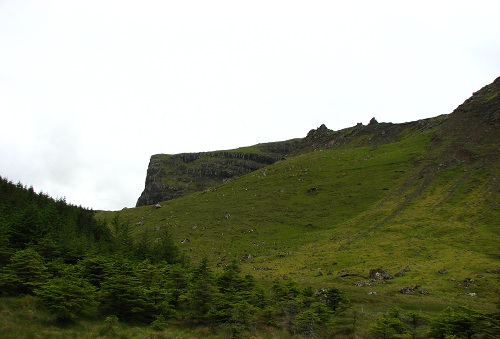 It was cloudy during our hike and we were afraid the entire time that it would start raining. That would be typical of Scotland, but it didn't rain. Whew! The wind blew harder the higher we climbed. 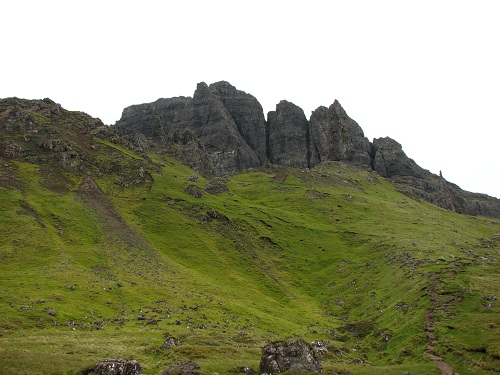 This whole area is incredibly steep and rocky and also beautiful. Above you can see the scree caused by erosion and the footpath to the right. 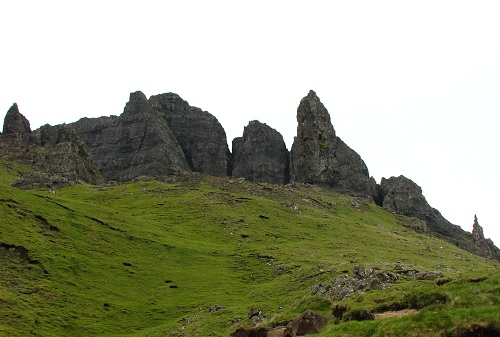 When we climbed higher it was easier to see the details of the individual rock pinnacles. Needle Rock is on the right hand side. Old Man of Storr is slightly right of center. 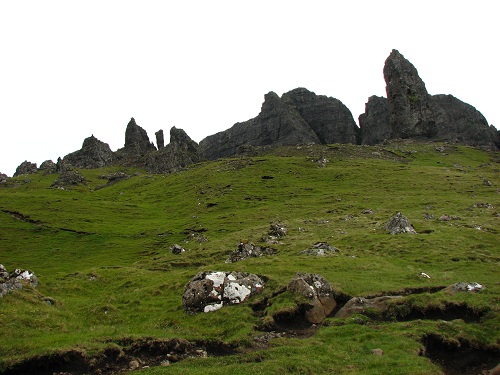 Old Man of Storr is 150 - 160 feet tall. In person it seemed much taller and more massive to me than it appears in photos. A person would look almost like an ant beside it. :) 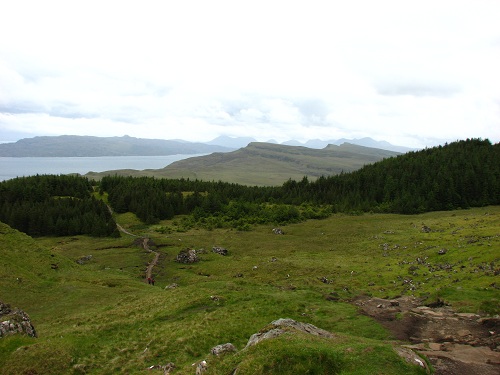 This shows part of the pathway and the spectacular view over the Sound of Raasay. This area is on the east side of the Trotternish Peninsula on Isle of Skye so it looks toward Isle of Raasay and the Mainland.

I hope you enjoyed this virtual hiking trip to Old Man of Storr. :)
Thanks!!
Vonda

Fantastic. I am exhausted from the hike I took with you this morning. :) I can see why you loved this area and so glad you had me in your pocket because I would never have made it all the way otherwise. Thanks for sharing this today. As always, your photos are beautiful!!!

Vonda, thanks so much for your continuing my education of various locales in Scotland. You've graced us with some wonderful photography, and have piqued my desire to see these sites in person.

In the meantime, I will enjoy the generosity of your stories and photos.

Vonda - What gorgeous pictures. Definitley want to go to Scotland, cut not sure I would want to do the walk that you did. Thank you for doing it for me and taking the pictures. :-)

That was marvelous. I could almost hear the wind and feel the mist.

Thanks Paisley! I was exhausted after that hike also! Whew! It was one of the most difficult hikes I've done. Wish I'd been in better shape for it. My husband was flying up through there, darn him. LOL

Thanks Derek! I'm glad you enjoyed it. I bet you would love hiking to the Storr.

Cynthia, thanks! I hope you get to go to Scotland. It's an amazing and beautiful place!

Angelyn, thanks! I'm so glad you enjoyed the virtual trip! There was certainly lots of cold wind during the hike. :) Brr. I get cold just thinking about it.

Fantastic Pictures! And a wonderful Adventure! Thank You so much for Sharing!

Absolutely mesmerizing!You painted visual words along with the photos. I'd love to visit. Thanks for sharing.

Beautiful pics and a grand adventure. I was happy to go along vicariously as the hike sounded quite strenuous and chilly. :)

That's really cool, Vonda. I'm reading a book right now that takes place on the Isle of Skye so this was a neat treat to actually see some of the landscape.

Vonda, these are great photos as always. Wish I had been there on that trip, but I doubt I could have made it to the top, but glad you did!

Jan, thanks! It really was a wonderful adventure.

Thanks, Carol! I'm glad you enjoyed it. I wish everyone could experience it at least once.

Carol/Annie, thanks so much! You're right about that. It was a strenuous hike and the wind was cold. I'll have to make sure I'm in better shape before I attempt it again. LOL

Clover, great! I'm glad to add a bit to your reading experience. Isle of Skye is one of the most popular places in Scotland, and with good reason. It's so beautiful.

Dana, I missed you on this trip! I know you would love it up there. The views were fantastic. It was a tough hike. We'll just have to practice climbing mountains and we'll be ready. :)Thanks for visiting!

Very cool, Vonda, as usual. Near me, we have a formation called "Ladyface Mountain" and yes, you can see a lady's face. :)

Amazing pictures, Vonda! I've learned one thing from your post. If I ever plan to go to Scotland, I'd better get in shape first. :-) Thanks for doing the hard work so I can just sit here and take a virtual hike with you.

Gorgeous pictures!!! Thanks so much for sharing them. :-)

Randy, thanks! And that Ladyface Mountains sounds neat! I'll have to look it up.

Thanks, Vanessa! I wish I'd been in better shape! LOL

Maeve, thanks for checking them out!

Absolutely gorgeous. Thanks for sharing your experience with us.

Ally, thanks so much! I'm glad you liked them!