Scotland from the Water

One rare sunny day while we were in Scotland, we did a Seaprobe tour on a glass bottom boat called the Atlantis. We sailed from Kyle of Lochalsh. I forgot to take a photo, but I found the one below of the Lochalsh Hotel where we boarded the boat.  From what I understand, this is the same slipway where ferries used to take visitors from the mainland to Isle of Skye. Now of course ferries aren't necessary because of the Skye Bridge, completed in 1995, seen below in the background. The settlement of Kyle of Lochalsh is believed to have been here prior to 1600. 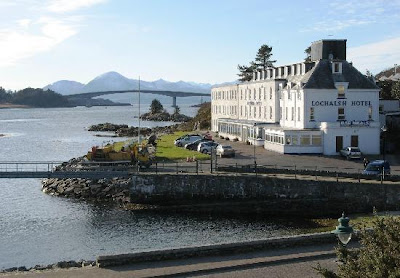 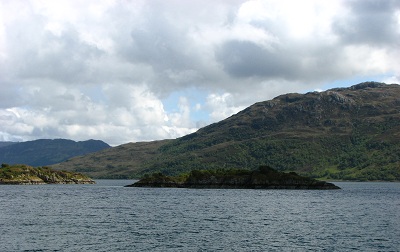 This is an incredibly beautiful and scenic area. We explored Kyle Akin, the area between the Scottish mainland and Isle of Skye. 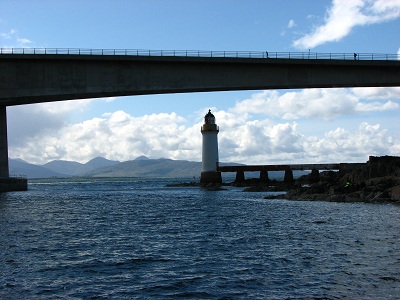 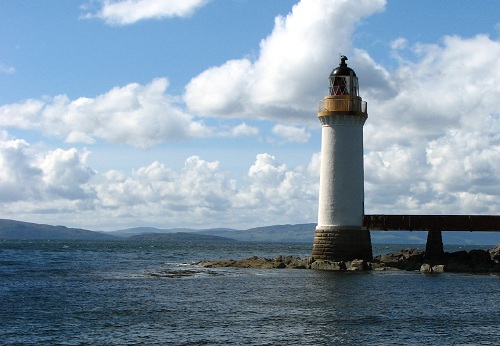 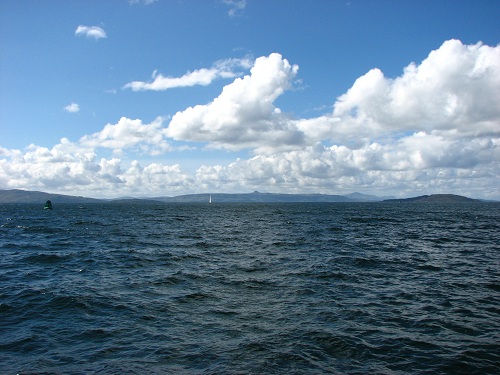 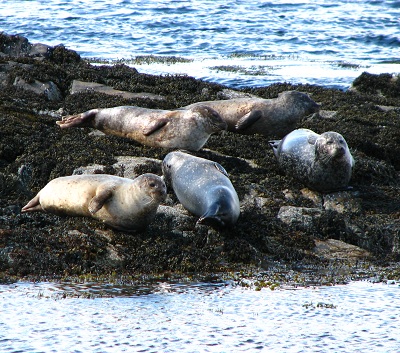 We saw dozens of seals! This was the first time I'd seen them in the wild. 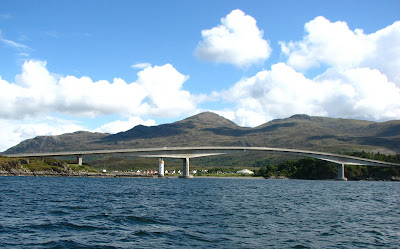 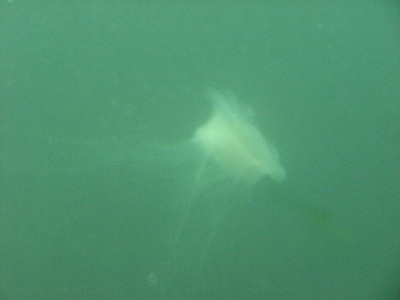 When we went down into the glass bottom boat, we could see what was under the water. Lots and lots of jelly fish of all sizes also kelp and crabs. 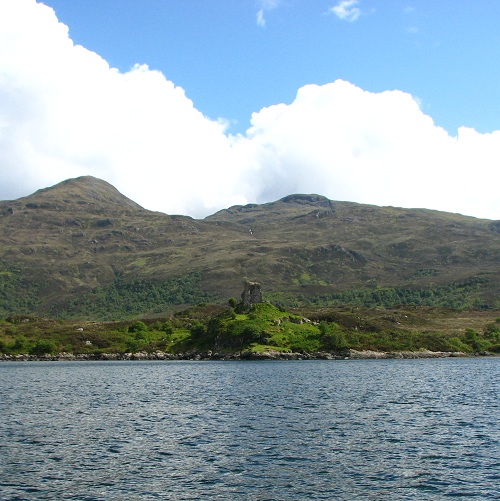 This is the ruins of Caisteal Maol, a keep built in the 1400s, although there were earlier fortifications on this spot. Part of this castle collapsed in 1949 and even more of it in 1989. When some repairs to the walls were being made in 1951, a hoard of coins were found in one of the walls. 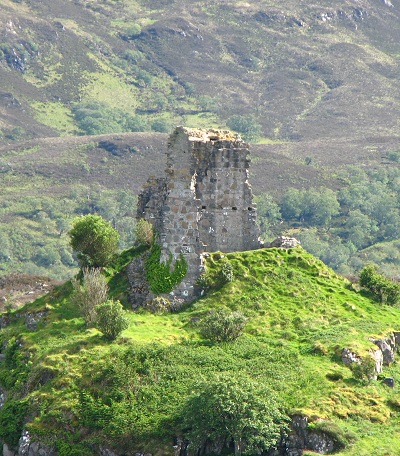 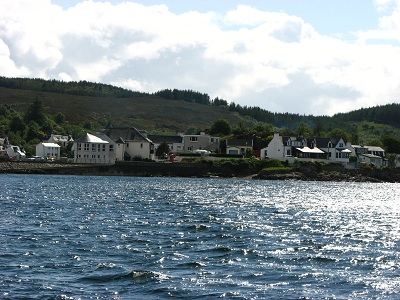 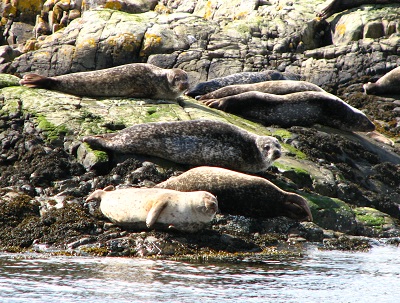 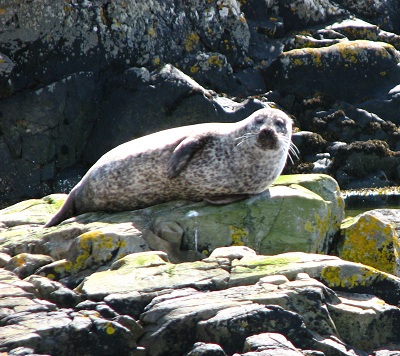 I hope you enjoyed this virtual trip of Kyle of Lochalsh and Kyleakin. :)
Thanks!
Vonda
www.vondasinclair.com

Thanks so much for the tour. Beautiful Scotland. I'm planning a trip.

Loved the pictures and the seals are too cute.
I'm working on my hubby to take the leap and vacation in Scotland.
Thank you for the inspiration.

Love your photos, Vonda! I couldn't get good pictures of Castle Maol & this area the day we left Skye because it was raining so hard we were hydroplaning in the car. It was a bit scary driving across the Skye Bridge that day.

Sandy, Thanks! I hope you convince him. My husband loved it more than he'd imagined. Now it's his favorite place too.

Margaret, thanks! I know how that is. Often I've been in the same situation of not getting good pics because of the rain and wind. And while crossing bridges during a storm the wind can be dangerous.

I LOVE the bit about finding a stash of coins in the wall of the castle. :) I hadn't heard that.

Beautiful pics, Vonda! Been a long time since I was in Scotland, but your photos brought back memories of how beautiful it was.

Homesick again, Vonda. If that village photo between the wildlife is to the left of the bridge from the mainland, we had lunch in a restaurant there. We were heading toward the castle, but the road was blocked because of excessive mud. Your photos are absolutely gorgeous, of course! Thank you.

Wouldn't it be awesome to find a huge stash of old coins like that? :) It's fun to imagine who put them there.

Susan, I'm glad you enjoyed them! It is clear why they call it Bonny Scotland. :)

Paisley, sorry to make you homesick again. :) I'm not sure which side I took that village photo on. Anyway, I thought it was pretty! I didn't know you could visit the castle. Neat! Hopefully you'll get to visit it next time. And maybe I will too.

Vonda:
As always a wonderful tour. I loved Skye and we did the tour of Donvagen castle and saw the Fairy flag while we were there. And did a boat tour around the point to see the Seals.

I love Scotland so much. Would love to live there.

Lovely photos, as always, Vonda. Thank you for sharing.

Hi Teresa, Thanks! Yes, Dunvegan is awesome. I'd love to live in Scotland too.

Thanks Carol! I'm glad you enjoyed them!

Gerri, thanks for checking them out!

Wow, amazing pictures, Vonda. I love seeing the ruins and those seals are so cute.

Now tell me dear lass, did one of those selkies try to pick you up? ;-)

Gorgeous photos and you know, Skye is one of the places I want to and need to visit. Top on my list for first visit.

Thank you for always sharing Scotland with us, I feel like I am right there with you.

Thanks, Vanessa! I'm glad you enjoyed them. I love the ruins. And seeing the different kinds of wildlife is fun.

Alexa, I know what you mean. Scotland is the home of my heart too!

Lizzie, Thanks! I'm glad you enjoyed the pics. No selkies shifted to hot Highlanders while I was watching. LOL! I hope you get to visit Scotland soon!

So beautiful. Thanks for sharing your experience with us.

The sea and sky have so much depth and personality there. So beautiful! Thank you for sharing!

Ally, thanks for looking at my pics! I'm glad you enjoyed them!

Dana, thanks! That's true about the sea and sky having a lot of depth. I find the sky in Scotland amazing and different.