I received my cover for Defying Convention. Look at Luke! Look at him! The moment I saw him, I fell in love. He's perfect! The shaggy hair, the perpetual five o'clock shadow...the hotness. I'm tickled pink over the cover! 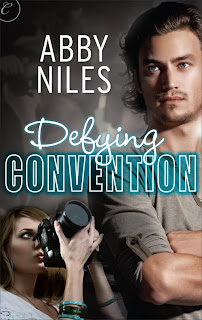 Emma Portland would do anything to save her career, even go undercover at the 31st Annual GalaxyCon in search of a story. Emma thinks she’s hit pay dirt when she meets Luke Evans, a bestselling scifi author whose readers have turned against him. She has no problem getting close to the sexy writer to get the scoop on his downfall. Except the more time she spends with Luke, the more she has a different kind of exposé in mind…

Luke can’t believe he’s found the one woman at GalaxyCon who hasn’t heard of him and can look that hot in a bikini. For the first time he’s opening up about himself…and the secret that torpedoed his writing career. Too bad his former fans are out for blood—and out to sabotage his budding relationship with Emma.

But amidst rival reporters, eager fanboys and overzealous role-players, it’s Emma’s secret that may put the brakes on their sizzling attraction for good…

I absolutely love this story and had so much fun writing it. I can't wait for it to release on August 1st with Carina Press. Here is a quick excerpt:

“He attacked you because of a character?”

The waif of a woman strode around the furry, narrowed her hazel eyes and put her hands on her hips. Luke sucked in a harsh breath. She was gorgeous. At first glance she’d pass for any other costume wearing woman attending the conventions. Their costumes and heavy makeup hid their actual appearance. Nothing was false about what she wore, except maybe the wig. Was her hair brown or something lighter, redder?

It didn’t matter. What captivated him was the pale, delicate skin displayed for his pleasure. The metal bra was a cup too small, thrusting her generous breasts forward. He clenched his hands against the urge to trace the enticing flesh.

Whoa, boy. Back down.

Yeah, right. How could he with her dressed like that? His gaze lowered to the bikini bottoms with the long burgundy fabric that hung in front. Riding low on her hips, the fabric accentuated the hourglass curve of her waist and showed off her perfect belly button. Luke swallowed. Ah hell. He was in trouble.

Not once had he mixed business with pleasure at a networking event. The possibility of falling for someone obsessed over an imaginary world had worried him. He needed someone grounded in reality, someone to come back to when he emerged from Farmen. Yet one small encounter with this spitfire princess with the most inviting plump lips—and he was rethinking his viewpoint. Not good.

“Hello! McFly.” She snapped her fingers in front of his face.

She rolled her eyes and shook her head, mumbling something about geeks and women. He blinked again. Had he heard that correctly? He didn’t know what to do with a woman?

Oh hell no. Against his better judgment or not, he knew exactly what he wanted to do with her.

Great cover and story concept. He looks like Leo DiCaprio. So cool!

Thanks Cameo! You're not the first to bring Leo into it:):)

That's a great cover, Esme!! Sure to catch the readers' eye!