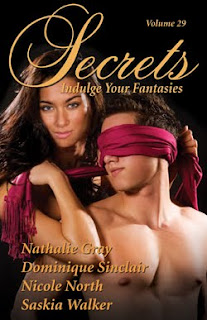 My novella, Beast in a Kilt, has been released in the anthology Secrets Volume 29 Indulge Your Fantasies! I’m excited! And I’ll be signing it tomorrow evening at the Readers For Life Literacy Autographing at the RWA conference in Orlando. Please drop by my table if you have a moment.

Being published is an adventure I’m enjoying every moment of. Nothing makes me happier than talking to readers, signing books, and handing out bookmarks. Maybe I’m insane, but I even enjoy edits, revisions and art fact sheets.

I love writing, imagining and creating new worlds. One of my favorite aspects of writing what I do is recreating a paranormal world in Scotland of four hundred years ago. Everything about Scotland fascinates and captivates me, especially the beautiful landscapes. Some of them are so wild and mystical, especially the west coast with the dramatic cliffs, the mists, lochs, mountains and moors. And of course castles. Scotland’s history, culture and folklore are equally captivating and inspiring. I often think of story ideas when I’m doing research and reading a bit of history about a clan, or when I’m reading Celtic legends. The legend of the kelpie inspired Beast in a Kilt.

In my story, the characters travel over some wonderful landscapes from the rugged misty coast to a castle by an inland loch where a mysterious kelpie lives (the hero of course!) :) Aside from their bedchamber adventures, Torr and Catriona experience many other adventures on their journey to love, including being chased by a rival clan, being chased by a witch of the dark arts, a combat of magic, and facing off with a barbarious chief.

She moved toward him, this man she’d loved even before she knew what love was. Tentatively, she touched his hair. Silky and soft.
He stiffened but said naught. Her hands shook with reverence and the thirst to explore him. She brushed her fingertips over his ear, the upper part of his cheek, the stubble covering his square masculine jaw.
His breath caught. “Catriona? Nay,” he whispered, but remained still. He would not meet her gaze.
Look at me. She trailed her fingers down to his strong chin, the short whiskers scraping the pads of her fingers. Touching his lips snatched her strength.
Torr, I have loved you—
No, she could not say it. Instead she bent and pressed her lips to his. She knew not how to kiss properly, the way a man would like, but she wished to.
His lips pushed against hers a bit, then parted, his breath warming her. She kissed him again and did what she’d seen others do when kissing. She flicked her tongue against his upper lip. Oh, that feels nice. She yearned to taste him all over.
He groaned. “God’s bones, lass. Ye’re playing with fire.” He tugged her to him and returned the kiss with more force, sliding his tongue between her lips. And then she knew what he’d meant. Her body was on fire, her lower belly, between her legs, an aching burning need. So overwhelming she knew not what to do next except hold onto him. They would become lovers. He would marry her. It had to be.
He surged upward, taking her with him to his tall height, and pinned her to the wall by the window. Her heart raced. He wrapped her legs about his waist and filled her mouth with eager and sinful tongue kisses. Oh good heavens, what would he do next?


Stories in Secrets Volume 29 Indulge Your Fantasies
Beast in a Kilt by Nicole North
Scottish lady Catriona MacCain has loved Torr Blackburn, a fierce Highland warrior, since she was a young lass, but Torr only sees Catriona as his best friend’s little sister. When Catriona’s family promises her in marriage to a detestable chieftain, she desperately needs Torr to save her from a fate worse than death. But Torr is under the spell of a witch of the dark arts and is cursed to spend his nights as a kelpie water demon. He doesn’t believe himself worthy of the virginal Lady Catriona. However, she is determined to seduce Torr and claim him… body, heart and soul, if only they can banish the curse and defeat the enemies who have vowed to possess and enslave them both.
***
Chimera by Nathalie Gray
All warfare is based on deception
—Sun Tzu’s Art of war
From the overcrowded slums of a future Earth, he rose as the perfect tool of lethal justice and deception. Cold and stoical by choice, alone by circumstances, he will neutralize any and all threat to his client then move on. Blunt, direct. Nothing personal. But when his next assignment involves a popular politician who’s as smart as she’s attractive, the greatest betrayal would be to deny his heart.
***
Sweet-talking the Opposition by Saskia WalkerLondon-based journalist, Eliza Jameson, is on assignment on a luxurious Rhine river cruiser when she finds the perfect distraction on board — old flame, Marcus Weston. But Eliza came dangerously close to falling for Marcus last time around, and in order to play him at his own game, she decides to call the shots. Meanwhile, Marcus has his own agenda. In the ensuing battle, who will end up on top?
***
Edge by Dominique Sinclair
The search for the truth leads to the edge of danger, revenge and love… A beautiful hellion, the first woman trained by the Department of International Intelligence, Catlina Demarco left her life without so much as a goodbye. Deep in Mexico, she’s close to finding the man who can give her the truth of her past, or kill her.
Agent Noah Tyler, Cat’s former partner and lover, is the last man she expects to show up with handcuffs and intent to bring her back to headquarters. No one has ever left the agency alive, Cat’s no exception. Only she refuses to go anywhere with Noah, he betrayed her trust. Forced into the jungle by three armed banderos, Cat finds her and Noah once again working as partners, their thoughts as one, their bodies craving, their goals conflicting.
Hot, angry and infuriated, Catalina must rid herself of Noah Tyler before everything is lost, including her heart.
Buy or read more excerpts at Red Sage.
Thanks!
Nicole
www.nicolenorth.com
By Nicole North at July 27, 2010
Email ThisBlogThis!Share to TwitterShare to FacebookShare to Pinterest
Labels: adventure, Beast in a Kilt, Nicole North, Scotland, Secrets Volume 29 Indulge Your Fantasies

Have a great time in Savannah and at the conference! The anthology sounds great. I hope they got the cover fixed. I think I'll go check it out.

Your gorgeous landscapes almost sound like characters in their own right, Nicole. Engaging scenery adds a wonderful layer to a story, and it sounds like you've done your homework. I won't make it to Orlando, but I wish you luck and lots of sales!

Thanks Carly!! The cover is fixed now. Yay!I'm enjoying Savannah. But it's HOT here. I almost melted today.

Thanks Pat!! I love describing landscapes in my books. I wish you could be in Orlando!

Congrats on the new Secrets anthology! I'll be signed tomorrow too! Looking forward to seeing you there :)

Natasha, thanks!! I look forward to seeing you in FL. I'm melting in Savannah at the moment.