The Adventure is in the Journey

My husband and I are traveling from New York to Florida in our RV this week. He'll be dropping me off at the Swan and Dolphin Resort in Orlando for the RWA National conference on Wednesday, then he'll keep himself busy til he picks me up on Sunday. Then we're visiting his brother in Georgia on our way back home.

The trip down will take four days. I've already started a journal of our trip and have filled several pages. I knew I'd get several days worth of blog posts our of this trip. The coming weeks will more than a vacation. More than a writer's conference.

They will be an adventure. 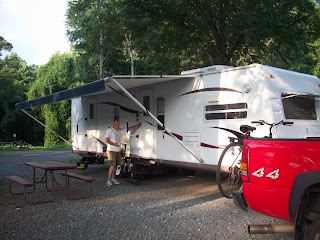 The story starts on Friday evening, when DH and I brought everything down to the camp where we keep our RV. We packed the closets, the cupboards, the refrigerator. The forecast was for severe thunderstorms, so after a nice dinner, we hitched up the trailer to the truck, so that we could pull out first thing in the morning. We relaxed, watched a little TV. The rain started pouring out of the sky like it was coming from buckets. Greatful that we'd already hooked up, we got ready for bed.

My husband's cell phone rings at 10:30. At that time of night, you know it can't be good. It's our son. His car broke down and he and his girlfriend are stranded. They managed to get off the road, thank goodness, but the car is blocking a fast food drive-thru. It's pitch dark, still pouring down rain. "Dad," he asks, "what do I do?"

He's a half hour away. We're in bed, it's still raining. Son had called a couple 24 hour towing companies he found in the phone book but no one would come. Did I mention it is pouring? Truck already hooked up? And of course, our son doesn't have enough money to pay for a tow if he could get one.

So much for planning ahead.

Hubby goes out in the rain, unhitches the trailer in the the dark. He tells the son to call 911 and explain his car broke down, that he's stranded and doesn't know what to do. The 911 dispatcher was very nice and hooked him up with a wrecker who came out within 1/2 an hour. Hubby drove out to pay the tow truck driver, pick up the kids and take them home.

So, aside from the ball joint busting on my son's car, at night, in the middle of a rain storm, and us having to unhook the trailer and bail him out with some of our vacation money...thank God no one was hurt, he got the car off the road, we were close enough to help, and he has the use of his mother's car while his is getting fixed because she's on her way to RWA National in Orlando.

And this was all before we left...As I write this Sunday night, we've had several near accidents and a flat tire. But we arrived safely and I'm now enjoying a glass of wine and checking my emails and writing a blog post.

Two more days before we get to Orlando. I'm sure I'll have more adventure stories to relate later on!

I'll be signing at my first Literacy Signing at National and I hope all of you going will stop by and say hello.

Have fun! My husband works for a RV dealership in Macon, GA. You'll probably come right through Macon if you're going interstate instead of back roads.

And having three boys myself with teh older two driving, I know I never want to hear my phone ring in the middle of the night. I'm glad they are both OK and were not in a wreck.

Have fun on your trip. It will be a great adventure.

I got the call in the middle of the night and now I hate to hear the phone ring any time of the day. (Everyone turned out okay, but you learn to be grateful as long as no one is hurt, right?

Hey Lisa! My brother in law lives just outside Macon, so that's where we're stopping on the way back! Yeah, sometimes those kids can gave us gray hairs. :)

Thanks, Carly! We just got out of the pool at a campground outside Jacksonville. Niiiiice.