When younger I marveled at the comic book heroes whose bravery and quest for justice remained unflagging in the face of danger and personal devastation. I’m one who has always cheered for good to defeat evil. For right to overpower wrong. I longed to, someday, create my own super-heroine. An otherworldly woman who fit the modern mold, defended her loved ones and friends, put the welfare of others first, cherished her independence but also desired a romance with the man of her fondest dreams. You could say Hellé Hawthorn is a blend of Carrie Bradshaw of Sex and the City and Lara Croft of Tomb Raider fame. 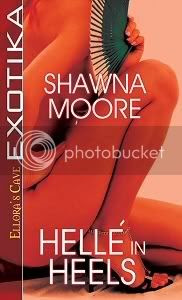 Helle Hawthorn is the heroine of HELLE IN HEELS, my first Exotika release at Ellora’s Cave. She is the daughter of the Devil and a mortal woman. She was gifted with her father’s good looks and charm, but she has her mother’s kind nature and conscience. Of course, this makes for the perfect conflict between her and her father. Women will relate to HELLE IN HEELS because this erotic tale explores the feminine tendencies of self-sacrifice and nurturing. Helle shows readers how women can dare slaying their sexual demons and finding fulfillment in more ways than one. But her bloodline doesn’t save her from being dealt the ultimate blow. She is banished from Hell and forced to leave behind her otherworldly powers and true love in order to save Earth from Satan’s destruction. She uses her intelligence and demonstrates unflagging determination when escaping a hellish situation that's getting hotter with each passing moment. Helle is quite adventurous and a sexual being, but she doesn't hesitate putting another's needs before her own when a situation warrants. Quite a candid woman, she tells one lover she's, "Your mother's worst nightmare and your daddy's wettest dream." Despite her sassiness and sex appeal, she never forgets the handsome Greek who brought her love and orgasms below ground. Menlikus, the story's hero, shows how far he will go and how much he will risk for the woman of his wildest and most romantic dreams. HELLE IN HEELS is a tale of personal loss for the gain of the masses. Taking chances to bring peace and betterment to your own life and the lives of others.

The Devil isn't above defeat. Helle and her Greek lover, Menlikus, never surrender their goals despite the fact they’re faced with a dismal situation. They might be otherworldly characters, but they are able to differentiate between love and lust and recognize which means more to them overall. Circumstances drive them apart, but one is often thinking about the other. Helle was such fun to create because I gifted her with a level of intelligence that enables her to outsmart her despot daddy. On reaching Earth, she faces the ultimate sexual obstacles and learns more than one valuable lesson in the process. When I characterized Helle, I wanted to make her multi-faced and enable her to rise above the stereotype that those who dwell in Hades are inherently evil. I also created a world where the Devil isn’t such an all-seeing, all-knowing entity. That he has his limitations and intellectual superiors. I also didn’t want Helle suffering immediate defeat at the hands of the Devil.

The paranormal is blended with an edgy, sassy tone in this Ellora's Cave Exotika tale. If you think you really know what happens in Hell, Helle Hawthorn might change your mind.

Hellé’s next adventures will be published on April 29 by Ellora’s Cave Exotika. TO HELLE AND BACK AGAIN pits Hellé against two villains. Her life and the lives of her friends hinge on a return trip to Hell, and she faces sexual temptation in the most delicious and deadly ways.

Click here to watch the book video for HELLE IN HEELS

Wishing you all out-of-this-world reading experiences,

This looks great, Shawna. My son is a superhero fan from way back and has been trying to get me to write some characters with superhero powers. Hmm...

Congratulations on your upcoming release, Shawna!! I love characters who have supernatural powers. Never know what they're going to do next. :)

By all means, go for it :) I've had a wonderful time coming up with villains against whom I'll pit Helle :) Bringing a super-heroine to readers has brought such happiness, and I'm hoping to have more stories in Helle's supernatural future :)

You've tapped into one of the reasons creating superheroines is such fun--the unpredictability of their world and situation :) Each time I sit down at the writing desk to add another scene or chapter to Helle's adventures, I have such a great time twisting the plot and tossing her more conflict with which she has to deal in order to survive :) It's fun being able to go a bit more outside the box for her exploits :)

Hope you have a wonderful week!