Can I Re-Write That Ending? 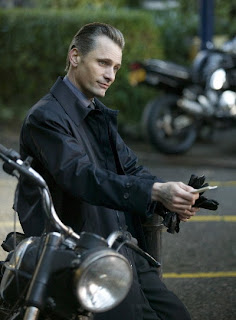 Have you ever watched a movie or read a book where you really wanted to change the ending? This doesn't happen to me as much when I read a Romance because Romance always delivers that happily ever after. Come to think of it, the fact that I write Romance is probably why I often have the desire to tweak endings of books and movies that aren't billed as Romances.


This occurred most recently when I watched the Viggo Mortensen movie, Eastern Promises. It's not a Romance and it's not for the faint of heart, but it is a great movie and Viggo's performance is fantastic. He plays Nikolai, a member of the Russian mafia, Vory v Zakone. Naomi Watts is the female lead, Anna, and there are sparks between the two and even a kiss. Of course the Romance writer in me hoped for more. (There was the nude fight scene though!)


(If you're going to see this movie and don't want any spoilers, you can stop here!)


The movie does have a happy ending in that we discover Nikolai isn't as bad as he seems, and everyone gets what they want to an extent. But the writer in me already had the ending scene in mind: Anna would see Nikolai on the street about a year later, surrounded by his minions. He'd see her. Their eyes would lock. Then we'd have the hope that they'd see each other again in the future and live happily ever after. Well, the director, David Cronenberg, didn't use my ending! I loved the movie, but the ending scene flashed so clearly in my mind I was actually surprised the movie didn't end that way - would've been much more dramatic and romantic than the way it actually did end.


Do you ever envision better endings for movies or books than the actual ending? I suppose that's how fan fiction and sequels got started...
By Carol Ericson at January 31, 2008
Email ThisBlogThis!Share to TwitterShare to FacebookShare to Pinterest

I hated the ending of the movie Premonition (Sandra Bullock). I can't say the movie was great anyway, but I did love the paranormal time-shifting element where she lives her days out of order for about a week. The end was incredibly badly written and I don't think any sane woman who cares about her husband one ounce would've done what she did. If you've seen it, you know what I mean, if not, no spoiler. LOL So that's one ending I'd rewrite.

The Taming of the Shrew.

Katharine and Petruchio have a big laugh about how they convinced everyone that he's turned her into a docile wife. As if anyone could ever tame her. Ha!

The Academy Award winning film Witness is a source of both love and frustration for me.
You might remember it. Witness was released in 1985 and went on to win Oscars for film editing and best original screenplay. Yet, I still had a problem with the ending. The film is about a young Amish boy who witnesses a murder --and the police detective who risks his life to protect the young witness from corrupted cops. Harrison Ford plays detective John Book who eventually hides out with the child and widowed mother in the Amish community. The crime drama and culture clash are very well done, it is the love story between Ford and the mother, Rachel, played by Kelly McGills that I would change. (Spoiler here) At the very end there is a good-bye scene between Book and Rachel. Through this dramatic story and despite their different lifestyles, it is clear that these two people have fallen in love. Well, at the end Book leaves without telling Rachel how he feels. In Linda Seger’s book, Making A Good Script Great, the last chapter is about Witness. Seger says one of the screenwriters William Kelley lobbied for a stronger good-bye scene, however, the director Peter Weir chose to go with the non-verbal farewell. And that did not work for me. Love that intense needs to be verbalized between the lovers. It makes what they feel real and it bonds them, even if the relationship is never consummated. Sigh, like I said I love this film, but I would have loved it even more with a passionate display of affection, physical or verbal, at the end.

Nicole, I haven't seen Premonition. Sort of sounds like that other movie Sandra Bullock did, The Lake House. I'll wait for it to come on HBO (and write my own ending!)

Alice, nobody can tame Kate!

Fronnie, I loved Witness too. Loved the scene in the garage when the Sam Cooke song is playing and they dance. And I agree with you about the ending. Of course, they could never be together, but give us something!

This conversation makes me think of this quote:

"The test of whether or not a writer has divined the natural shape of his story is just this: after reading it, can you imagine it differently, or does it silence your imagination and seem to you absolute and final."

And yes, I loved Eastern Promises most of the way through, but agree it faltered at the end. Still, that fight scene! That was a whole lotta Viggo!

Evie, great quote. Did you see the movie, Capote? Great movie and Phillip Seymore Hoffman did a fantastic job. And yes, I thought about Eastern Promises a lot when it was over.

Whole lotta Viggo is right! I was watching with my husband, so I couldn't do any freeze frames - LOL.

I don't watch much TV, but I saw a Simpson's episode where they found an alternate ending to "Casablanca" buried in someone's backyard.

If I'm not mistaken, the unearthed ending had them getting together instead of going their own separate ways.

Reminds me of Stephen King's latest movie, name slips my mind. Lousy ending. :) I hate to pay that much when the ending isn't satisfying.

"Eastern Promises" has to be one of the most subtly plotted movies around. So many people misunderstand it!

Nikolai is *not* a member of the Russian mafia. He is an undercover Russian policeman working for the Russian Bureau of the London police. He is *not* brutal. The only violence he is a part of in the movie in related to mutilating a corpse and self-defense. He just *seems* brutal. The one bad act he commits is having sex with the girl in the brothel. He tries to avoid it but can't without blowing his cover. To make up for it, he gets the police to raid it and sets up a rescue specifically for the Ukrainian girl.

When Nikolai and Kirill drop off the de-fingered corpse early in the film, he *lies* and says that this is the best place as the current will pull it under. Instead, the corpse is quickly washed up on shore where his police supervisor discovers the letter he has planted on it. After he is nearly killed in the bath house, his supervisor wants to pull him out. Nikolai passionately argues against it. He shows his supervisor his tattoos that prove how far he has infiltrated the gang, pleading that he doesn't want to "waste these."

That is the marvelous twist of "Eastern Promises." Instead of Nikolai being the troubled minion fighting against his good impulses, the story reveals that he is noble and self-sacrificing--risking death and denying himself the relationship he wants with Anna in order to bring the mafia down.

Instead of rewriting the ending, I think fan fiction should extend it to reveal what experiences from the past made him so determined (did the mafia kill his wife? did his sister get hoodwinked into a brothel where she died?).

I went to a talk with the director Cronenberg at UC Santa Barbara. In the original script, the fact that Nikolai is an undercover cop was *more* explicit. In fact, halfway through, the cover is blown to everyone and he and Anna go on the run, ending up together after the usual exciting shootouts and so forth. That would have been the more "satisfying" ending romantically--but definitely not as good of a movie.

Please! Watch the movie again. You'll see what I mean and have a much greater appreciation of how perfect the ending is. That's not to say that after bringing down the London Russian mob within a year or so, he won't look Anna up and find out she's never forgotten him....