The Difference Between Night and Day

You never know what will happen in the dark of night when a park closes.

When writing a book, the scenes in it truly can be the difference between day and night. I had picked up some Halloween books for my granddaughter and one was about what the owl sees and hears at night. Usually the books are all about babies and animals spending the day doing something and then going to bed at night. At least that’s what we want the children to get from the bedtime story–we had fun, now it’s time to sleep.

The nocturnal animals aren’t out during the day, and the diurnal animals sleep at night, so even this has to be considered when writing about night and day. 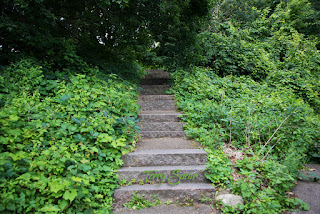 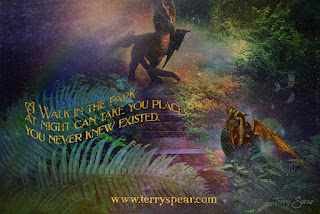 The other thing is people can’t see at night.

When I was writing one of my Highland stories, I realized they really couldn’t see each other in a room without light. lol So I had to make a light source. With my shifters, the animals can see well at dusk and dawn because their wilder animal halves can.

It’s the same with doing photography. Where is the light coming from? What is highlighted and what is in the shadows? How can the photo pick up anything in the dark without some kind of light?
At night, you can’t go to many of the stores because they’re closed. You can’t get hold of certain places in the dead of night. Some stores aren’t open until later in the morning, some restaurants only open in the evening.

So what happens with an ordinary set of stairs leading up to the maze gardens in the Arboretum at night when the center is closed? You’ll have to experience it for yourself because at night, the world is a whole different place.

I wrote 1,000 on Cougar Magic last night, despite baby wearing me out. But I also brainstormed with one of my beta readers on an issue I need to resolve in the story. Now I need to figure out how to bring that part of the story out. I still need to work on SEAL edits, but I needed a fresh mind to figure out how to change the opening–my editor says I have too much stuff packed into a couple of days and trying to change that is going to be a nightmare since everything is connected. I think all the stuff is doable. I could do them.

I might have to show that time frame better. Her flight is only 1 hour and 15 mins, but delayed by 15 mins, and then she gets lost driving from Denver and that could add another 15 mins. So she’s half an hour late to the rehearsal…and I said dinner, but I can change it to luncheon. Yay! And now I think I can do everything I wanted to do like I had it! I think my editor was imagining like a 3 1/2 hour flight and an hour delay, etc…. I just have to make it clearer.
Okay, I’m off to get busy! Have a super day/night!