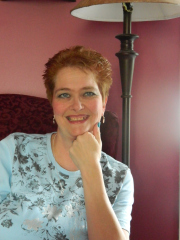 I believe I was destined to be interested in history. One of my distant ancestors, Thomas Aubert, reportedly sailed up the St. Lawrence River to discover Canada some 26 years before Jacques Cartier’s 1534 voyage. Another relative was a 17thCentury “King’s Girl,” one of a group of young unmarried girls sent to New France (now the province of  Quebec) as brides for the habitants (settlers) there.

My passion for reading made me long to write books like the ones I enjoyed, and I tried penning sequels to my favorite Nancy Drew mysteries. Later, fancying myself a female version of Andrew Lloyd Weber, I drafted a musical set in Paris during WWII.

A former journalist and lifelong Celtophile, I enjoyed a previous career as a reporter/editor for a small chain of community newspapers before returning to my first love, romantic fiction. My stories usually include an Irish setting, hero or heroine, and sometimes all three.

I’m the author of The Claddagh Series, historical romances set in Ireland and beyond, and The Wild Geese Series, in which five Irish heroes return from the American Civil War to find love and adventure.

I’m a member of the Romance Writers of America, Hearts Through History Romance Writers, and Celtic Hearts Romance Writers. A lifelong resident of Montreal, Canada, I still live there with my own Celtic hero and our two teenaged children. 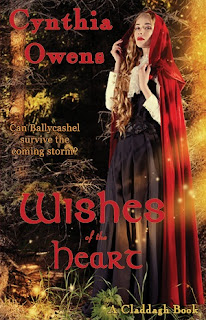 Thanks so much for having me today! I’m very excited to talk about Wishes of the Heart, Book Seven of the Claddagh Series!

Q: Thank you for joining us! Please tell us about your book.
A:  Wishes of the Heart is very special to me, because it’s allowed me to write about—and introduce my readers to—the second generation of the O’Brien family of Ballycashel. The hero, Tom O’Brien, is the second son of Rory O’Brien, hero of my first novel, In Sunshine or in Shadow. He knows he’ll never be the true heir to the estate, but he’s worked side-by-side with his father since he was a lad, when his rebel brother, Sean, fled to America just ahead of the British soldiers. He loves Ballycashel, and he’s determined to make sure the estate can keep its tenants…much to the dismay of his father, who resists Tom’s even the idea of change.
Tom’s heroine is Neave Devereux, a wise woman suspected of witchcraft. She’s spent most of her life scorned by the village folk. Alone in her cottage, she yearns for acceptance, friendship…and love.
As storm clouds gather over the village of Ballycashel, Tom and Neave must come together to fight superstitions and old enemies.
Q: Sounds great! What inspired this story?
A: Wishes of the Heart is my “Cinderella-with-an-Irish-twist” story. Tom O’Brien is a wonderful prince charming, swooping in to rescue Neave from the angry village folk on several occasions. And while Neave gets to go to Tom’s sister’s coming-of-age ball, she flees before it’s over, leaving behind not a glass slipper, but a Galway shawl.
Q: Wow! What a wonderful twist. Why did you choose your setting and why was it perfect for your book?
A:  The story is set in the west of Ireland, a place full of mist and magic, legend and superstition. And of course, like all of nineteenth-Century Ireland, it was rife with political intrigue. It was only natural that my village folk would fear a woman they called cailleach (witch). And there’s no place more eerie and mysterious than Ireland, where ghosts may linger in the misty woods. In fact, there is a ghost in this story, who shows himself only to Neave. It had to happen in Ireland!
Q: I love the supernatural element. Did you choose the title of your book and if so how did you do it?
A: I chose the title of the book, and it was a natural for me. I don’t remember how many times I watched Disney’s Cinderella with my daughter as she was growing up, and the song A Dream is a Wish Your Heart Makes stuck with me. Maybe because, like most writers, I’m a bit of a dreamer myself. When I decided to write this “Cinderella-with-an-Irish-twist” story, the song came back to me, and I just twisted it around a bit.
Q: Please tell us about your favorite character in the book.
A: Well, they’re all my favorites in their own unique ways, but I think I love Neave best. Her deep desire to be accepted by the village folk always tugged at my heart. Yet she’s strong, too, and determined not to allow the village folk to destroy her. She holds her head up against their cruel taunts.
Q: Which element of this story was the hardest for you?
A: I think it had to be Neave’s isolation, her desperate longing for friends. I was painfully shy as a child, and a rather solitary one. I spent most of my time at the library, and I had a very hard time making friends. So I could very easily identify with Neave’s loneliness. Fun Fact About Me: I was 30 years old when I came down with chicken pox (caught it from my niece). Up till then I hadn’t realized I’d never had the chicken pox before, and when I did get it, my husband, with his twisted sense of humor, said I must have been at the library when all the other kids got it. He was probably right!
Q: LOL But that must have been tough getting chicken pox at that age. What inspires you? What motivates you?
A: Ireland inspires me, always Ireland, everything Ireland! Her music, her myths and legends, and of course, her history. And her people. The friendliest people anywhere, a people who have suffered and survived, if not in their own homeland, then all across the globe. The breathtaking landscape, the mists that flow soft against the soft ground, the sea that crashes against her majestic cliffs. There are so many stories to be told, and I want to tell all of them. That’s my motivation!
Q: That is very inspiring. Please tell us about your other books.
A: The Claddagh Series, historical romances set in Ireland and beyond
The Wild Geese Series, the Irish heroes return!
Q: What’s next for you?
A: I have a few projects I’m currently working on. The Carousel is Kieran Donnelly’s story and Book 6 of the Wild Geese Series. I’m also writing three novellas for a single-author anthology of Christmas stories..

Wishes of the Heart is available at:
Amazon
Barnes & Noble

Thank you again for being our guest today, Cynthia! Everyone, please visit Cynthia online:

Thank you so much for having me here today! I look forward to meeting and talking to some of your followers!

Thank you for being our special guest, Cynthia! I enjoyed your interview!

This is such a great blog and i really enjoyed this interview. Wishing you the best with your latest release, Cynthia! I'm reading it now and simply loving it! This interview is icing on the cake!

Thanks for the good wishes, Anastasia, hope you enjoy the story.