I never liked romance novels. My mother was crazy for them, though. As long as I can remember, my mother had hundreds of them piled on the nightstand that she went through like candy. Historicals, contemporaries, cowboys, ghost stories-- you name it, she probably read it. Even more hilarious was that some of them were quite scandalous. Or so I thought as a young teenager. I loved the romantic parts. The love story between the main characters was always something that I sought in every book I read, but my mother’s bodice rippers were lacking the adventure that I craved from things like my beloved Stephen King and Anne Rice novels.

When I was in college, I started writing the kinds of stories that I wanted to read. While I loved my beloved horror novels and paranormal thrillers, I was missing the love story. Not sickly sweet love stories or anything, but the connection between the characters.

Remember that movie from the '80s, Romancing the Stone? Yeah, that to me is the perfect romance. Two people thrown together to defeat some dangerous foe and falling in love in the process. The hero and heroine get equal time to be badass. They work as a partnership rather than the girl always being saved by the swashbuckling guy with the codpiece. So when I got ready to write NAKED, I plotted out the adventure first and let the romance develop naturally. I want my readers to get pulled into this grand adventure with them instead of just reading from one hot steamy scene to the next. I’ve always described myself as an author who writes romance novels for people who hate romance novels.

I’m also a huge fan of James Bond and spy movies and/or books. Even the “realistic” ones like Tinker, Tailor, Soldier, Spy (or any John LeCarre for that matter). Gadgets, super-technology, double-crossing, betrayal, secrets-- how can you NOT love a good spy thriller? So I knew that I wanted to incorporate that world into my series. As the series goes on, you’ll learn more about Cage St. John and B.E.A.S.T., the spy organization that he works for. And at the center of it all, I promise you’ll find a smoldering love story. 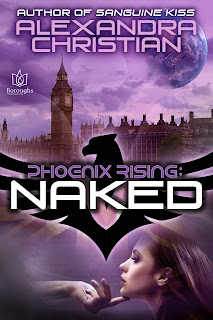 BLURB:
NAKED by Alexandra Christian
Following a brutal act of vengeance, MI:6 agent Macijah St. John is left grieving for his slaughtered family and agrees to participate in a secret government experiment that gives him a magnificent and terrible power.  Now he’s a mercenary spy that solves problems for the right price.  His latest job puts him in the path of the greatest catastrophe yet—a librarian.
Phoebe Addison’s life is a disaster. Crippling debt, a non-existent social life, and being the town librarian is hardly the glamorous existence she’d always dreamed of. But when her sister Jessica, an interplanetary archeologist, gets herself involved with a psychotic billionaire bent on world domination, Phoe is about to get more excitement than she bargained for.


Bio:
Alexandra Christian is an author of mostly romance with a speculative slant. Her love of Stephen King and sweet tea has flavored her fiction with a Southern Gothic sensibility that reeks of Spanish moss and deep fried eccentricity. As one-half of the writing team at Little Red Hen Romance, she’s committed to bringing exciting stories and sapiosexual love monkeys to intelligent readers everywhere. Lexx also likes to keep her fingers in lots of different pies having written everything from sci-fi and horror to Sherlock Holmes adventures. Her alter-ego, A.C. Thompson, is also the editor of the highly successful Improbable Adventures of Sherlock Holmes series of anthologies.
A self-proclaimed “Southern Belle from Hell,” Lexx is a native South Carolinian who lives with an epileptic wiener dog and her husband, author Tally Johnson. Her long-term aspirations are to one day be a best-selling authoress and part-time pinup girl. She’s a member of Romance Writers of America and Broad Universe—an organization that supports female authors of speculative fiction.

This book sounds like fun! I love reading about new authors. Off to amazon to check it out.