And all through the house, not a creature was stirring, not even a–
Okay, hold on here, OF COURSE, no mice would be stirring in this house. This is a jaguar shifter house! 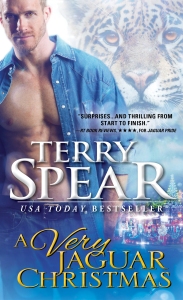 You thought I was going to say Santa and the elves, didn’t you? But the fairies create havoc with everything I do, so I figured I’d hedge my bets and mention them instead. I was at a luncheon in Old Spring and it was a gloomy, rainy day, and when I say rain, I mean, icy cold rain all day. But not to be thwarted as I never get down there and I wanted to see if they had anything unique for Christmas gifts, I trudged through the puddles of water in the rain, and every shop was just as cold as I was.
In Salado, also an old Texas town that reminds me a little of Old Spring, the shops would be filled with the fragrance of wassail, Christmas cinnamon spices, or coffee. Not here. The shops would sport a Christmas tree, each having its own beautiful theme. 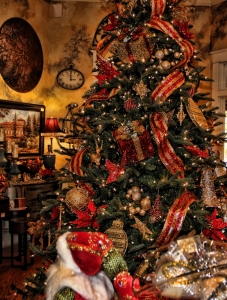 But not here. When I reached the German Gift House, they had mulled wine and German cookies, and best of all a genuine, beautiful Old Saint Nick. I was wet, cold and my hair was a mess from wearing the hood up on my raincoat for two hours in the rain, and when they asked if I wanted my picture taken with Santa, I said no. Then they talked me into it, and I was so glad they did. My dad’s paternal grandparents were German, Wilde, which means wild. Here we thought he was a wild Irishman, but he was a wild German instead. The Irish and Scottish and French, and the German Cremers/Cramer were on my mother’s side. 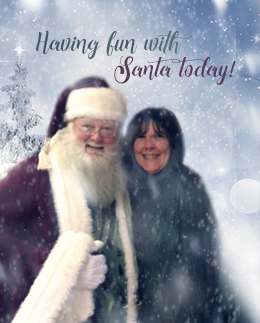 I felt that the rain would turn to snow at any second, I was so cold. It was perfect to get me in the mood for writing more on Loving the White Bear.  I’m glad they convinced me to take that shot with the best looking, most realistic Santa I’ve ever met. I’d never had mulled wine before, and it did help to warm me up a bit, and after buying a couple of lovely German ornaments for my daughter and son-in-law’s tree and my son’s, I was off, trudging through the cold rain again.
But I didn’t need to shop any more, looking for that special Christmas gift. I had already found it. A little bit of Christmas, German style, on a cold, rainy day in Texas.

December 8, 2016
The Fresh Pick is chosen by a group of readers and is never a purchased advertisement or promotion. We’ve picked this book because it appeals to us and we like to share our diverse tastes in reading and hope you’ll give it a try.