Looking forward to relaxing with a good book (or two...or ten...) after all the holiday madness? I have just the thing! Twenty-two books on sale through the end of the year! Her Royal Masquerade, book #1 in my Her Royal Romance series is part of the sale at only 99 cents! If you've already read it, there are plenty more romances to choose from. You can load that new e-reader (or your old favorite) with lots of great reads for pennies (or even free!).

Just take a look here for all the sale books in one place:
HOLIDAY SALE

And if you've seen me talk about my contemporary royalty romance series, but haven't given it a try...this is a great time to check it out. Take a peek at the excerpt below for a taste. 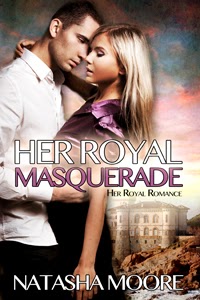 
Mia rushed over to the waist high railing constructed of rough-hewn stone like the rest of the palace. Darkness had fallen while she’d been inside. Lights from the towns around them sparkled below. Stars in the inky sky twinkled above. Once again she had the feeling of stepping into a fairy tale.

“Allow me,” he said, his voice suddenly a little deeper, a little slower than it had been a moment before. He took her hand in his, stretched out her arm in front of him. He ran his free hand up, starting at the palm of the hand resting in his. Slowly, so slowly, he moved his hand up her arm. There might as well not have been the fabric of the glove between them, she felt his touch so strongly.  When his fingers reached the top of the glove, he didn’t immediately begin to remove it. Instead, he teased the bare skin of her upper arm with his fingers. “So soft,” he whispered, holding her gaze. He swept his hand up to her bare shoulders and cupped her neck, skimming his thumb along her collar bone, just above the diamonds Birgitte had trusted her with. “This beautiful necklace is not half as lovely as you,” he murmured.

Vittorio swept his gaze over her. “And it would truly be a shame to cover the amazing view I have at this moment.”

She let her hair fall down her back. “I suspect you have had a lot of practice with those charming lines,” Mia said, letting the amusement show in her voice. Still, she soaked up the compliment, let the pleasure flow over her like a warm spring rain.

Hearing her cousin’s name fall from Vittorio’s lips was like a handful of snow smacking her in the face. Of course. She had to remember she wasn’t Mia Holmberg tonight. She’d almost forgotten she was playing a part. Still, she lifted a skeptical brow at his words, they were so foreign to those she usually heard.

“You will find that I always speak the truth,” he said. “I despise lies and deception. I have heard and seen too many of them during my years in the palace. Too many people say one thing to my face and another behind my back. I speak only the truth when I say that I am so glad you accepted our invitation to my father’s birthday celebration and that I find you incredibly attractive. I would never lie to you.”

Mia shuddered at his words. She couldn’t let him discover her deception. He would never understand.