Today is the release day for the second book in my Silver Fox Romance series! Rescue Me is the story of a fireman's widow whose attempt at being wild and spontaneous backfires, and her husband's best friend, another fireman who has resisted his attraction to his best friend's wife for years. They get thrown together in a snowstorm and forced to face their feelings for each other.

I love writing about older characters, men and women with life experiences and histories that give them layers and create conflict. I hope you'll want to read about Bonnie and Joe's second chance at love.

The first review is in and calls it "...a wonderful story about second chances..." 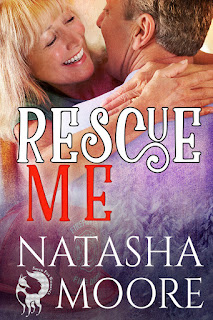 After years of playing it safe, Bonnie Petrowski’s first attempt at being wild and spontaneous leaves her spinning off the road during a blinding snowstorm. The sassy widow has few regrets, but never owning up to her feelings for her late husband’s best friend is one of them. And now it might be too late.
Firefighter Joe Waterman isn’t going to let a little thing like a blizzard stop him from getting the hell away from his big empty house. He doesn’t get far, however, before discovering a small car buried in the snow. When he recognizes his friend’s widow inside, his unwanted attraction to her still blazes hot enough to melt the snow piling up around them. After he rescues her, not only do the sparks continue to zap between them - Bonnie wants to talk about their feelings for each other.


Joe made a promise years ago and he’s bound to keep it. Even if it means he and Bonnie can never have a chance at forever together.
Amazon   B&N   Apple   Kobo
Natasha
www.natashamoore.com