Castle Moil is also known as Castle Moal, Caisteal Maol, Dun Akyn, Dun Haakon and Castle Dunakin. It is located near the village of Kyleakin next to Loch Alsh on Isle of Skye. It was a MacKinnon castle built between 1490 and 1513. 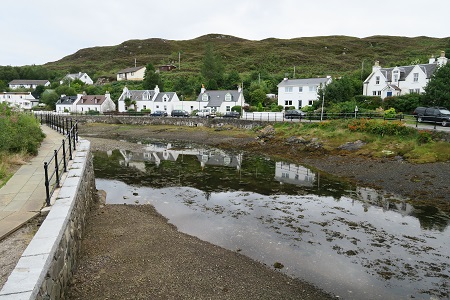 We walked to the castle from the beautiful small village of Kyleakin.

It's a short hike to the castle that includes walking along village streets and then through bracken fern and along the shore where the water flows in at high tide. This is a flagstone with a warning about the tide. I suppose someone could get stuck at the castle overnight if they weren't careful. 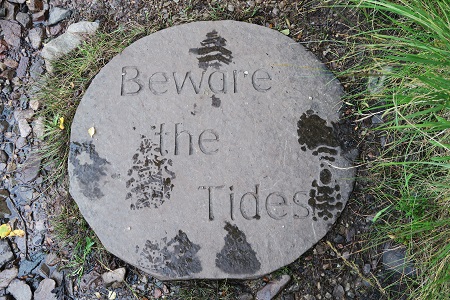 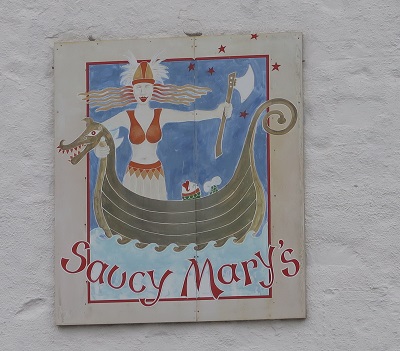 To prevent unpaid crossings through the narrow straight between Skye and the mainland, the reputed builder of Castle Moil, a Norwegian princess and wife of a MacKinnon chieftain remembered today as "Saucy Mary", had a chain hung from the castle walls across the channel to the mainland. The chain was raised to block passage and thus allowed her to extract toll from all vessels which passed through the Kyles. Why was she named Saucy Mary? Allegedly Mary, following payment of her tolls would, as a gesture of thanks, flash her breasts at the sailors as the ships would pass. Today, there is a lodge and restaurant in Kyleakin called Saucy Mary's.


At one point on our hike, we followed some other tourists who didn't know where they were going either. :) And two of us ended up climbing a rocky, muddy hillside. Very difficult! I took the above photo from there. Once we realized this was the wrong trail, we climbed back down again. LOL Sometimes the bracken grows over five feet tall. It's easy to see how enemy warriors could've hidden in it before an attack. Above, you can also see the heather (pinkish purple). It was in bloom all over Scotland when we were there in mid-September. 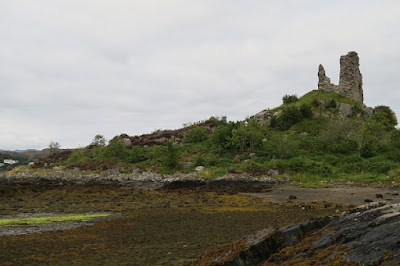 Walking along through the edge of Loch Alsh while the tide was out. As you can see from the seaweed, the water comes in pretty far. 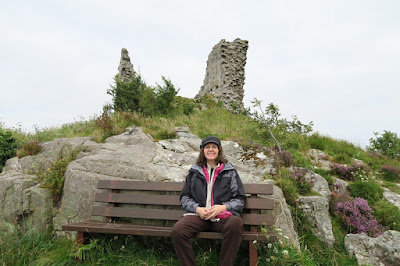 After all that walking, I needed a break. Here, I'm sitting on a bench below the castle ruin. 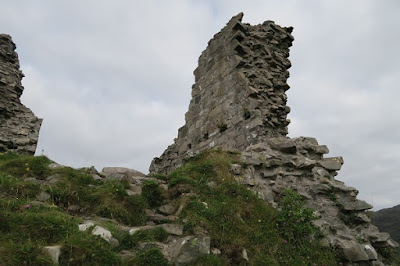 The hardest part of the hike normally would be climbing up to the castle itself. My two friends didn't want to join me in the climb but I enjoyed it. :) I love exploring old ruins and taking photos of everything possible.


I took pics of the sign below the castle. It contains historical information. Click to enlarge them. 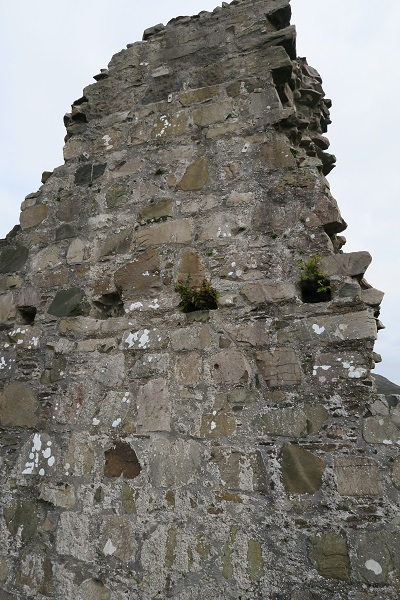 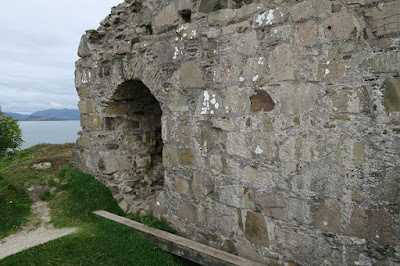 After leaving the castle, we walked back to the village and ate at Castle Moil Restaurant. The food was delicious and I recommend it highly. I hope you've enjoyed this wee visit to Castle Moil. Thank you for taking the journey with me. :)
Vonda
www.vondasinclair.com

PS Coming soon... the audiobook version of My Daring Highlander. :) 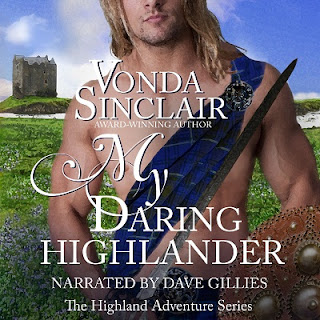 I love these posts! It makes me want to go to Scotland all that much more.

Thank you for checking it out, Collette! You'll love Scotland when you visit!

Love this! One day I want you to be my tour guide in Scotland!

Love it! I wish I had gotten to Skye - it is so helpful to see it through your eyes!

Thanks, Sherrie! I hope you get to visit Skye soon!

Loved the guided tour, Vonda. You know how I enjoy your grand photos, especially of Scotland. Thanks for sharing. :)

Thank you, Paisley! So glad you enjoyed it! :)

A very interesting post, especially the part about the lady thanking the sailors. Lovely photos.

Aye! I can see why she was called Saucy Mary. LOL Thanks for checking it out Brenda! :)

Thanks for the fascinating history and photos of this beautiful place.