In the year 563 AD, St. Columba came to the Isle of Iona from Ireland with twelve followers and founded a monastery. This transformed the small island into a holy island, a beacon of faith and a lasting center of Christianity. The monastery here was one of the most prominent in early medieval Europe. It was a well-known place of education and art.

The monastery suffered many attacks from the Vikings, but survived. The first Viking raid happened here in the year 795 and another in 802. In 806, 68 people were killed during a raid at Martyr's Bay. The following year, the Abbot of Iona left and went to Kells, not too far from Dublin in Ireland, taking most of the monks with him. The famous Book of Kells is said to have been started on Iona and then taken to Kells in 807. Some believe it may have been brought back and completed on Iona as well.

Many believe that Iona was an isle scared to the Celtic peoples and Druids long before St. Columba settled here.

Iona Abbey has a very spiritual atmosphere. The day we visited in July 2013 started out as sunny but while we were on the bus, a misty rain began to fall. The tour involved taking a ferry from Oban to Craignure on Isle of Mull and then a one to two hour bus ride from one side of Mull to the other. The scenery was beautiful but the roads were rough and mostly one lane. (I would not have wanted to drive there because the roads were fairly busy to be in such disrepair.) When we reached Fionnphort, we walked down to a smaller ferry and took it over the short distance (one mile) to Iona. When we first arrived, the rain was still falling, so we ate lunch and I bought a rain jacket, since I'd forgotten mine back at the B&B. Then, once we started walking toward the abbey, the rain stopped. :)

St. Oran's Chapel was built in the 1100s and is the oldest surviving building on the site. It was probably built as a family burial chapel by either Somerled, King of the Isles, who died in 1164, or by his son Ranald.

A burial ground called Reilig Odhrain surrounds the chapel. Many Scottish leaders, clan chiefs and possibly even Scottish kings were buried here for centuries. In 1549 an inventory was conducted which listed grave sites of 48 Scottish kings (including Macbeth), 8 Norwegian kings, and 4 Irish kings. Although this is a longstanding belief, there is no archaeological evidence to support it. Experts believe that mostly powerful clan chiefs, especially those from the MacKinnon, MacLean and MacLeod clans and the Lords of the Isles are buried here. The cemetery is believed to be from early Christian times, so it existed long before the chapel. 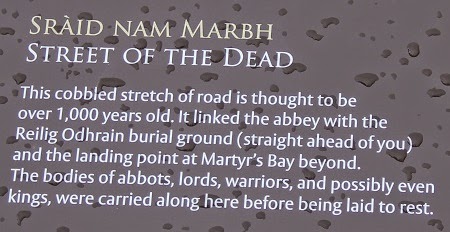 A Benedictine abbey and an Augustinian nunnery were founded here around the year 1200. The buildings were constructed on the site of St. Columba's earlier settlement, and no archaeological evidence remains from St. Columba's day. Iona was a sacred place of pilgrimage until the Reformation in 1560 when monastic life came to an end. The abbey, church and other buildings were ransacked and all the books burned. The island supposedly had many large high crosses, only four of which survived. In fact, most of the island was destroyed. After this, the abbey and nunnery fell into ruin.  The abbey and church were restored in the 20th century.

Since the 700s, tall ornately carved crosses stood in front of the abbey church. St. Martin's Cross is the only original cross still standing and fully intact. Only fragments of the original St. Matthew's Cross, St. Oran's Cross and St. John's Cross remain. St. John's Cross pictured above is a replica.

The west face of the cross is carved with many Biblical scenes. Click the below photo to see these in detail.
The name of St. Martin's Cross is said to have been recorded in 1699 by Lhuyd. The cross is carved from a single piece of grey epidiorite believed to be from Argyll on the mainland. It stands in a granite base and the cross itself is over 14 feet high. The cross was carved between the years 750 and 800 and stands on its original site. St. Martin, formerly a Roman soldier who had a vision of Christ and converted, lived in the 4th century. He was particularly revered by the Iona monks because he lived a life of austerity and simplicity while also holding a high position in the church. He represented a religious ideal.

The east face of St. Martin's Cross has carvings of bosses and serpents. The raised circles or bosses are thought to represent God with everything revolving around Him. The serpents in the Celtic world represent rebirth since a snake sheds its skin.

Unfortunately we didn't get to see the original in the museum. I hope you enjoyed this brief glimpse of Iona Abbey. I took a ton of photos there, so I'll share more photos and information in a future post. You can find Iona Part 2 by clicking here. 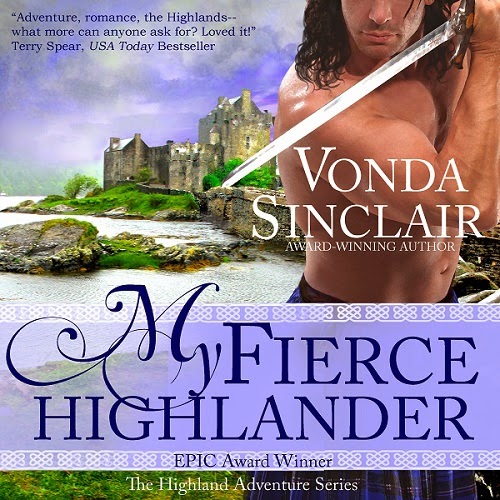 My Fierce Highlander now on audiobook.

Gwyneth Carswell, an English lady banished by her father to the harsh Scottish Highlands, wants nothing more than to take her young son away from the violence of two fighting clans - her own distant kin, the MacIrwins, and their enemies, the MacGraths. She risks everything to rescue the fierce MacGrath warrior from the battlefield where he's left for dead by her clan. She only knows she is inexplicably drawn to him and he wants peace as she does. When her clan learns of her betrayal, they seek vengeance. Dare she trust the enemy more than her own family?

Laird Alasdair MacGrath is driven to end two-hundred years of feuding with the MacIrwins. But by taking in and protecting Lady Gwyneth and her son, he provokes more attacks from his mortal enemy. As the danger and conflict surrounding them escalate, Alasdair and Gwyneth discover an explosive passion neither of them expected. With the arrival of a powerful man from her past, a horrible decision confronts her - give up her son or the man she loves.
Available at Audible, Amazon and iTunes.

Great post Vonda! What a wonderful trip. When I went to the Western Highlands in September, alas, we didn't get to the Isle of Mull or Iona Abbey.

Thank you, Regan! I'm glad you enjoyed it! Cal-Mac has some great tours that leave from Oban, Ullapool and other places.

The burning of the books is so inexplicable to me. What a loss, and what did anyone gain? The pictures are beautiful.

Thanks! I agree, Carly. Those books would be a huge treasure today. The reformation was an incredibly violent time.

This is so wonderful, Vonda! I researched the Abbey for one of my books!

You know I love all your Scottish posts, Vonda, but this one was special to me. We met an English couple who have become good friends the day we went on the same ferry over to Mull, we got all the way out to the end but didn't make it out to Iona. I could see the abby and was so disappointed we didn't get to go out and see it. Thank you for showing me what I missed. :) Beautiful indeed.

It's such an interesting place, Collette.

Oh I'm so sorry to hear you didn't get over to Iona, Paisley. So close yet so far. I know you can see it across the one mile of water that separates the two islands. I'm glad you found great friends anyway!

Loved the post, Vonda! Beautiful photos as usual. I can't wait to see Iona for myself!

Thanks so much, Gwyn! I know you'll love visiting Iona.