Toward the beginning of our trip to Scotland in July, we stayed in a cottage near Oban. This is one of our favorite places to stay. We had seen McCaig's Tower in the distance on the hill over Oban on previous trips. You can't miss it because it dominates the skyline. One day we walked through town and up the steep hill (Battery Hill) to McCaig's Tower. This is a landmark that's easily seen from almost anywhere in Oban and it resembles a Roman coliseum.

Even though streets lead up to it, we decided to walk instead of drive for a few reasons. We enjoy walking. The streets are narrow, one lane, very steep, and difficult to navigate because many of them are two way, and people park on the street. Also I wasn't sure if there would be parking at the top. Following the signs, we walked along the streets and up a very long set of steps. Once we'd climbed what seemed like a million steps, we came out onto another street. There are streets and homes all over this large hill. They have a great view out over Oban Bay.


John Stuart McCaig, a local banker, had McCaig's Tower built in 1897 as a way to provide work for local stonemasons during the winter, and to create a lasting monument to his family. Some call it a folly because it's built to look much older than it is. McCaig was a fan of Greek and Roman architecture, and he was the architect of this tower. He had planned for the tower to be much more elaborate with statues of himself and his family, an art gallery, and a museum inside, but he died before all these plans could be carried out. Only the outer walls were completed.

McCaig's Tower is around 656 feet in circumference. It has 94 lancet arch windows, 44 on the bottom and 50 on top. At the time, it cost 5000 British pounds sterling to build. That translates to over 500,000 pounds in today's money. It is open all the time and there's no charge to enter.

McCaig's Tower is much larger than I'd thought, and the interior is filled with a beautiful garden. There are many shrubs, trees, roses and other flowering plants. There are also pathways and grassy areas. Locals, especially teens, like to lie in here and enjoy the sun (when it is sunny) and read. The walls block out most of the wind, so it's very peaceful, still and warm. 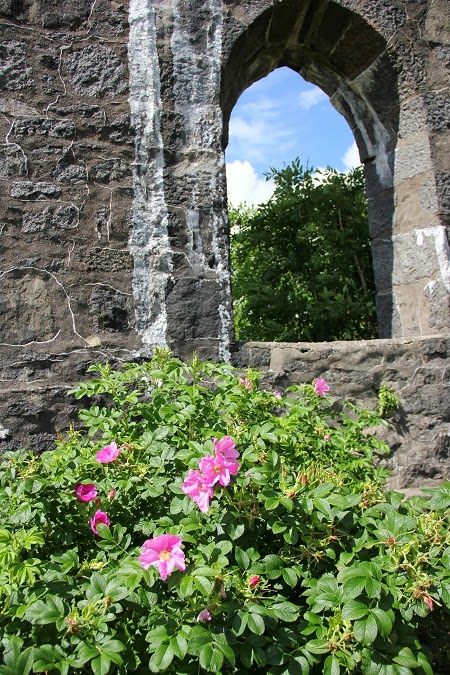 The day started out cloudy, but by the time we reached the tower, the sun had come out and it was warm enough for short sleeves. 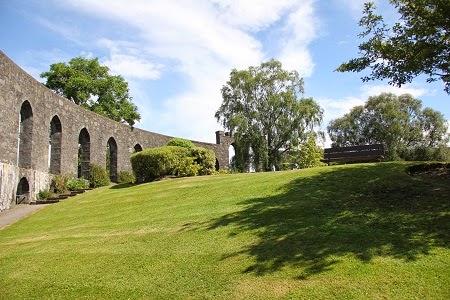 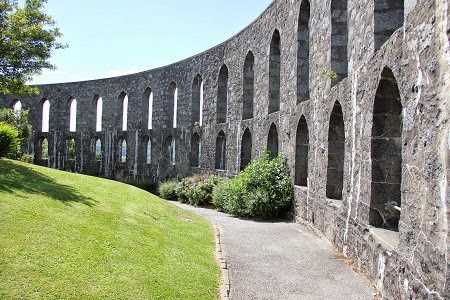 The walk back down the hill was interesting too, because we decided to take a different route along the streets instead of the long steps. We saw lots of beautiful homes and gardens along the way.


Thanks so much for taking this walk with me! :) Hope you enjoyed it.

The first book in my Highland Adventure Series, My Fierce Highlander, is on sale for .99 cents for a limited time at Amazon and Barnes & Noble! 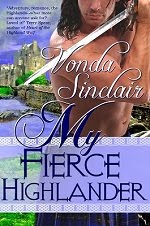 Gwyneth Carswell, an English lady banished by her father to the harsh Scottish Highlands, wants nothing more than to take her young son away from the violence of two fighting clans--her own distant kin, the MacIrwins, and their enemies, the MacGraths. She risks everything to rescue the fierce MacGrath warrior from the battlefield where he’s left for dead by her clan. She only knows she is inexplicably drawn to him and he wants peace as she does. When her clan learns of her betrayal, they seek vengeance. Dare she trust the enemy more than her own family?Laird Alasdair MacGrath is driven to end two-hundred years of feuding with the MacIrwins. But by taking in and protecting Lady Gwyneth and her son, he provokes more attacks from his mortal enemy. As the danger and conflict surrounding them escalate, Alasdair and Gwyneth discover an explosive passion neither of them expected. With the arrival of a powerful man from her past, a horrible decision confronts her--give up her son or the man she loves.

Oban is so beautiful. I'm glad you went inside McCraig's Tower. I was wondering what it looked like in there. :-) Thanks for sharing!

Those are wonderful photos. I loved the first house you showed and the folly! Thank you so much. I tweeted.

What spectacular photos! some of them would make gorgeous backgrounds for book covers. Thanks for sharing.

Vanessa, you're welcome. I definitely enjoyed the visit to the tower. It's really cozy and peaceful inside, in the protected garden.

Ella, thanks! I loved that house too. They have some really beautiful Victorian ones there.

Lyn, thanks! Some of my photos do serve as backgrounds on my book covers. :)

Oban Is one of my favorite towns. It is a Must visit every time I go home. My last visit was the first time I ventured McCaig's Tower My Brother in law was alive then it was also my birthday He bought me a beautiful necklace ( Charles Rennie Macintosh ) The Rose It is one of my favorites.
Yes We walked up too, It too was a beautiful day.
Thanks for the walk down memory lane.

Oban is my favorite too, Ann! We absolutely love it there. I'm glad I was able to make you think of fond memories! McCaig's Tower is a lovely place.

This makes me want to see Oban! I'm planning to rent a place nearby, just up near Glen Coe, so it would be pretty easy to take a quick day trip to Oban. Lovely photos.

Thanks, Theresa! You will LOVE Oban. :) Glen Coe is also a favorite place of ours. We hiked there on our last trip. Incredibly beautiful and haunting.