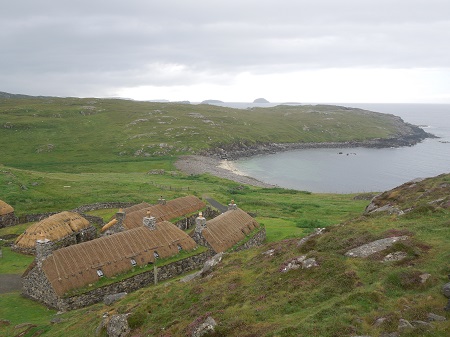 This is a continuation of our tour of Isle of Lewis, Scotland. Last week I covered Dun Carloway Broch and the week before Callanish Standing Stones. Rain was still sprinkling when we arrived at Gearrannan Blackhouse Village but it didn't deter us from jumping off the bus and heading to the museum. As you can see, there are several cottages here. One is a gift shop and also where you buy tickets. One has been restored to the way it was when people lived here. One is set up with a video with historical information and beautiful signs telling a lot of information and showing photos of the village and those who lived in it in the past. 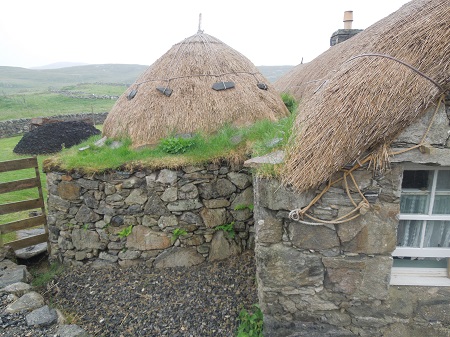 Blackhouses were built with double wall, dry-stacked stone and the space in between the walls was filled with packed earth. The houses have wooden rafters covered with turf and thatched with straw or reed. The floors were usually either flagstones or packed earth. Centuries ago, they didn't have chimneys. Instead, the fire was built in the center of the room and the smoke escaped through a hole left in the roof. The house had two sections, one for the people and a lower part for the livestock, like cows and sheep. This kept the animals warm during the harsh winters.

This peat fire was burning in the museum, which is a cottage just as it was when lived in in the early part of the 1900s.

A sign on the site reads: "The blackhouses were abandoned in 1974 when the last residents moved to Council Houses nearby. Being the last surviving group of such houses in the islands, and having such an attractive setting, their significance was recognized and the blackhouse village was formally designated as an outstanding conservation area in November 1976. Restoration began in 1991, and the main work was completed in 2001." 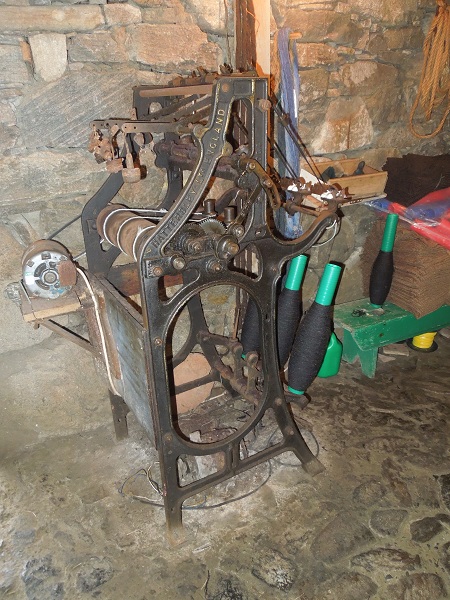 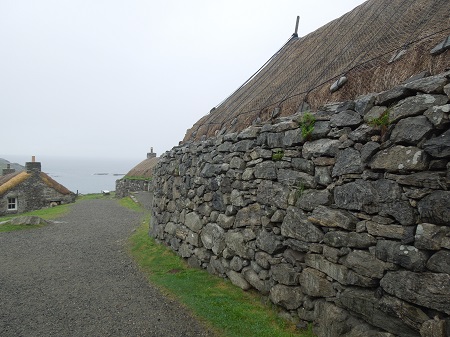 Experts have found evidence of a settlement on this site two thousand years ago, but it was abandoned. In the 1500s another village was established. Records from the 1700s show that one extended family lived here. Most of those who lived here later, into the 1970s, were descended from one MacLeod family. 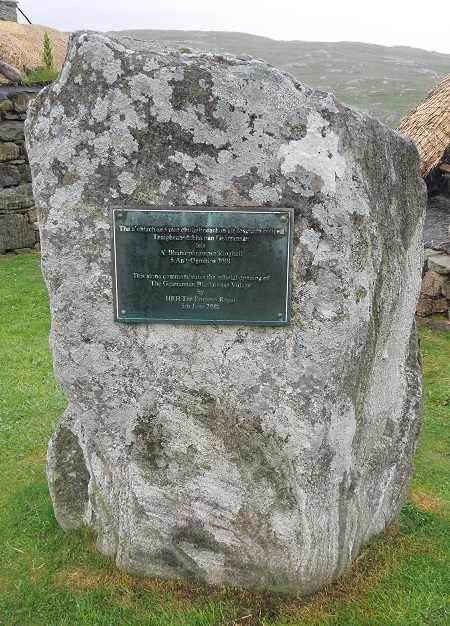 The plaque reads, in both Gaelic and English: "This stone commemorates the official opening of The Gearrannan Blackhouse Village by HRH The Princess Royal 5th June 2001" 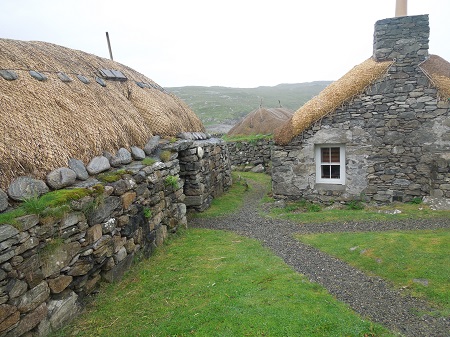 An 1850 Ordnance Survey map shows that at that time, the houses were not where the current houses are. Instead they were a few yards to the south and the village was called Sithean. The land was farmed communally. After 1850, separate crofts (plots of farming land) were established for each family. In 1886, the Crofting Act went into effect and this improved conditions for the tenants. They didn't have to worry about eviction and they were then allowed to pass their land on to their families. The present blackhouses (further north than the older ones) and the crofts that go along with them were established at the end of the 1800s. 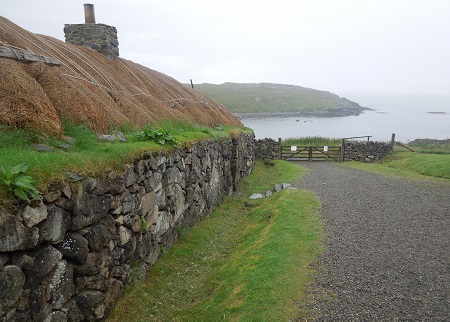 When the potato crop failed between 1845 and 1850, many people emigrated from Isle of Lewis. The Factor of the Lewis Estate at the time, J. Munro MacKenzie, recommended emigration to two of the Gearrannan families who could not pay their rents. This information is from his diary. 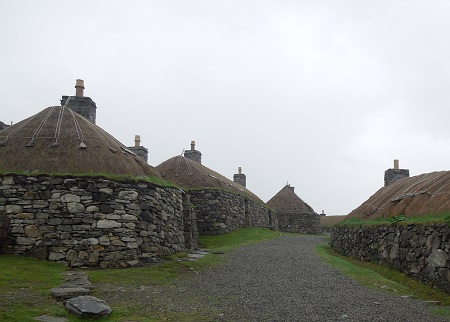 The local economy improved in the late 1800s and some of the men from the village found work in the ling-fishing industry at the nearby Dunan pier at Carloway. Three men from the village skippered boats. Others from the village went into the military, which provided some income, while some wove tweed on wooden looms. In 1908, those over age 70 could draw a state pension. In 1891 the population of the village was 109. This number kept increasing to around 1910. In 1904, 84 of the students at Carloway School were from Gearrannan. 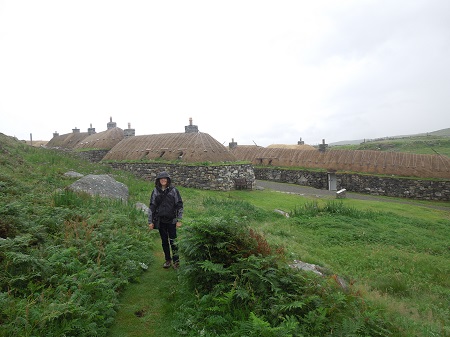 As you can probably tell because of my hood, it was still raining, even toward the end of the stop at this site. The midges were also really bad, especially on this hillside. For those who don't know, midges are like mean gnats. They happen to love my husband. They were getting inside his hood, biting his face and neck and dive-bombing his eyes. They got so bad, he returned to the bus early to escape them. 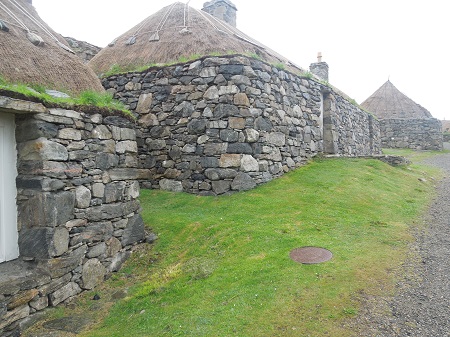 In 1891, 20 of the 165 people who lived in Gearrannan were fishermen, according to the census. The ling fish were caught on baited long lines, then salted and dried before being exported. This fishing industry was in successful operation until the outbreak of WWI. After the war, the old boats were in bad condition and the market for the fish had dried up. 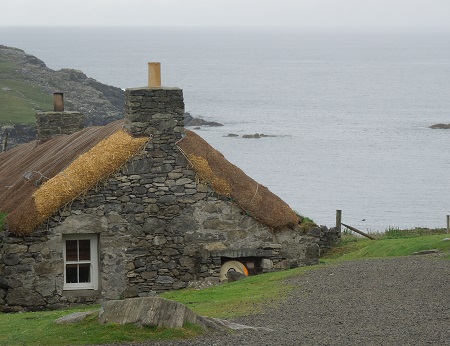 There was an economic depression here after the war. What little work that could be found included seasonal employment in herring fishing crews, although it was not as popular or successful as it had been previously. Crofting provided the basic foods for the villagers. Gearrannan was always first to plant crops in spring and every piece of arable land was cultivated. They also grazed sheep and cattle. But the crofts couldn't support everyone and many were without employment. In the early 1920s, hundreds of islanders left for America and some went to the Scottish mainland for employment. In the 1930s the local economy improved with the growing Harris Tweed Industry. 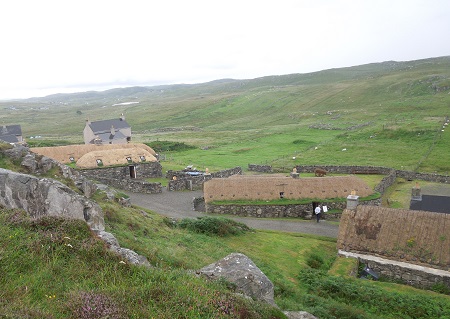 When the village grew too crowded, some families acquired crofts three miles up the coast at Dalmore.

World War I took many of the villagers' lives, especially when the naval yacht, Iolaire, sank while taking island servicemen home from the war in the early hours of New Year's Day, 1919. A sign in the museum shows the photos and names of each man who was from Gearrannan. This is known as the Iolaire Disaster and was devastating for the islands of Lewis and Harris because the islands had already lost over a thousand men during the war. Tragically, 205 men died when the Iolaire crashed into rocks and sank twenty yards from shore. Forty men made it ashore. 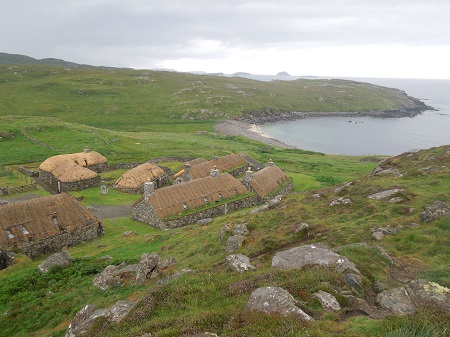 People of the village had good overall health in the 1800s. They worked hard, were physically fit and they ate a healthy diet of mostly oatmeal, potatoes, fish and milk. Of course, some diseases at that time were more prevalent than today, such as typhoid, infant tetanus and tuberculosis. The nearest doctor was eight miles away, but most people went to the local healer, John MacDonald (1829 – 1891.) He was skilled with blood-letting and herbal cures.

How would you like to stay in one of these blackhouses? Well, you can. They are self-catering. These houses have been restored. The exteriors look as they might have two centuries ago, but the interiors offer all the modern comforts of home. The kitchens are modern and they have controllable heat along with separate stoves for burning peat or wood, electric showers, and nice bedrooms. This work was done by the Gearrannan Trust a charitable trust of volunteers, most from the local area. 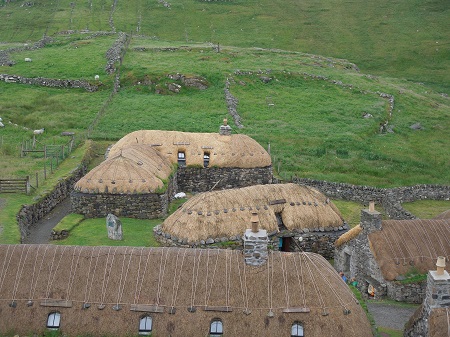 The ceilidh is an evening of storytelling and music. Everyone participated and enjoyed these events. Other forms of entertainment for daytime were shinty and football. In June 1934, a traveling circus visited Gearrannan. The children of the area were enthralled by the acrobats, jugglers and bare-back riders.

In the 1950s many of the island men joined the Merchant Navy. When they returned home on leave, they brought presents and told exciting stories of their travels to distant lands, but they also missed their loved ones while away. One of the most popular Gaelic love songs "Gruagach Dhonn Bhrunail" was composed by a Gearrannan man named Donald John MacDonald on board the "Urstom Grange" in the early 1950s. 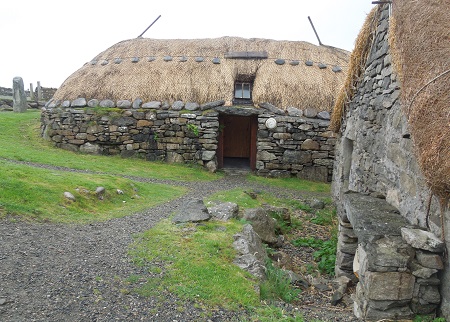 In the 1950s and 60s most of the residents of the blackhouses were elderly spinsters because the young people had moved away for employment, marriage or education. The ladies who remained had lived lives of hard work. They could still call on relatives in the local area, outside the village, for help in thatching or other heavy labor when necessary. By this time, there were very few blackhouses left anywhere in the islands. Tourism increased as more people wanted to experience the special atmosphere of this little village "at the edge of the world."

The houses began to deteriorate and the residents needed new places to live. In 1970, a site at the other end of the village was approved for building twelve new houses. After these were built, in 1974, all the remaining residents, four ladies and one gentleman moved to Gead Gorm. These new houses required no thatching, water was piped in instead of carried by hand, but the residents were allowed to have their cozy open peat fires.


If you would like to see more photos of Gearrannan or rent one of the blackhouses, please visit: http://www.gearrannan.com/
Thanks!
Vonda
www.vondasinclair.com

Gwyneth Carswell, an English lady banished by her father to the harsh Scottish Highlands, wants nothing more than to take her young son away from the violence of two fighting clans--her own distant kin, the MacIrwins, and their enemies, the MacGraths. She risks everything to rescue the fierce MacGrath warrior from the battlefield where he’s left for dead by her clan. She only knows she is inexplicably drawn to him and he wants peace as she does. When her clan learns of her betrayal, they seek vengeance. Dare she trust the enemy more than her own family?
Laird Alasdair MacGrath is driven to end two-hundred years of feuding with the MacIrwins. But by taking in and protecting Lady Gwyneth and her son, he provokes more attacks from his mortal enemy. As the danger and conflict surrounding them escalate, Alasdair and Gwyneth discover an explosive passion neither of them expected. With the arrival of a powerful man from her past, a horrible decision confronts her--give up her son or the man she loves.
By Vonda Sinclair at September 03, 2013
Email ThisBlogThis!Share to TwitterShare to FacebookShare to Pinterest
Labels: blackhouses, Gearrannan, Isle of Lewis, Scotland, Scotland travel, Scottish historical romance, thatched roof cottages

I love the cottages!! Thank you so much for sharing this. Tweeted and shared on FB.

So cool, Vonda!! I'm putting Lewis on my agenda for my next Scotland trip. Thank you for sharing!

I love these posts you do. Keep them coming.

Thanks Ella, I'm so glad you liked it!

Amy, thanks! You'll love visiting Gearrannan! I'd like to stay there for a few nights. :)

Thanks for checking them out, Clover!

The cottages are gorgeous. What a great history lesson.

Thanks, Tamara! I loved them too and the whole setting is gorgeous.

Yummy, Vonda. Amazingly beautiful villages and houses. I saw thatched roofs being sewen on a house on one of my trips to Denmark. I love how they look, but guess they are a pain to put on the roof. Thanks for sharing all the great photos and information that goes along with them.

Thanks, Paisley, for checking out my pics! I bet a thatch roof would be a lot of upkeep. But I love the way they look.

Such an interesting place! I love hearing the history of it. It's a place I'd definitely want to visit if I ever got over there. Thanks for posting

This was wonderful Vonda, almost like I was there. Thank you!

I'm glad you like it, Vanessa! It's a fantastic place to visit. Thanks!

Thanks, Gerri! Glad I could provide a virtual visit for you guys.