Hi everyone, today we continue our virtual tour of Stirling Castle in Scotland. If you missed the previous posts, you can see them by clicking these links:
Part 4
Part 3
Part 2
Part 1

After visiting the Grand Battery with all its cannons, we walked all along the Wall-walk and enjoyed the amazing views. The Wall-walk was built or improved upon in the early 1700s because of the 1708 Jacobite Rising. Below it lies the River Forth and the town of Stirling.

The wall-walk has fantastic views across to The Wallace Monument and Abbey Craig. Behind it are the Ochill Hills.

Though we didn’t have time to visit it, we looked down onto the Nether Bailey, a row of stone buildings built a safe distance from the castle to store gunpowder. These were built around 1810 to the north of the castle and also contained a guard house. Three of the magazines are surrounded by a high wall and covered by parabolic vaults in case of explosion.  This area was probably also part of the enclosed early earthwork castle. Experts think the Nether Bailey, before the construction of the powder magazine, was likely part of the service area of the castle, containing stables, stores, workshops and royal dog kennels. There is evidence of two small gates that may have led down from the castle to this area, but these would not have been the main entrances to this bailey. These gates were probably blocked in 1689. Today, the Nether Bailey also houses the tapestry studio where replicas of the unicorn tapestries are being woven. These tapestries are displayed in the Queen’s Inner Hall. 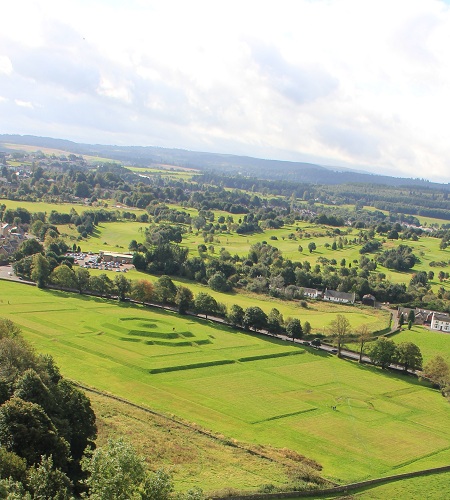 Above, you can see the King’s Knot, laid out in the 1620s, as part of the formal pleasure grounds in a field far below. 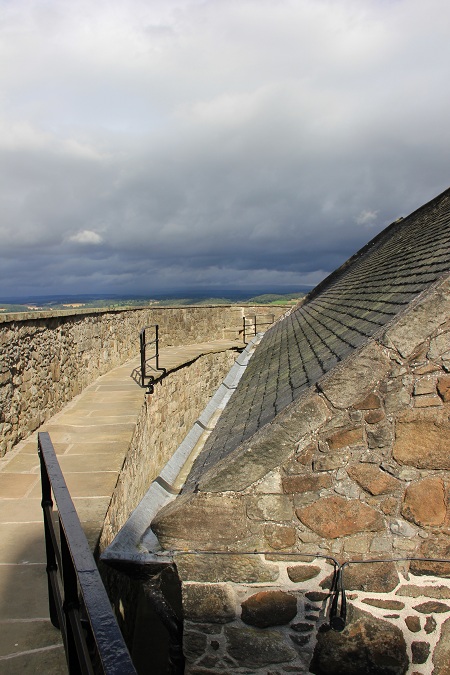 The Wall-walk is a raised platform or walkway on the inside of the curtain wall. It was important for the castle’s defense. Sentries, guards and soldiers walked along it, looking out over the countryside for approaching enemies. During attack, the soldiers would have fired weapons down from here. When walking along this, you have to be careful because there are few rails on the interior. Above, you see the roof of a building right next to the Wall-walk.


This garden at Stirling Castle, at the highest part of castle rock, has been here since the 1500s. Earlier, it was likely the site of an earthwork castle. The garden is known as the Douglas Gardens because this is where the body of the 8th Earl of Douglas was tossed out the window after he was murdered by King James II and his courtiers in 1452. It is said this happened because Douglas refused to end a potentially treasonous alliance with John of Islay, Earl of Ross and Alexander Lindsay, 4th Earl of Crawford.


Click here to see a view of Stirling Castle from the King's Knot Garden.

I hope you've enjoyed this visit to one corner of Stirling Castle. :)
Vonda
www.vondasinclair.com

Wonderful photos as always, Vonda! Thank you for sharing. :)

I definitely enjoyed that visit! Thanks for taking us along with you.

Thanks for visiting, Gerri and Angelyn!! I'm glad you liked the pics!

Loved the photos, of course. I did want to mention that there is a possibility the Douglas you have mentioned could very well be an ancestor of mine. The Kirkpatricks come from that Clan, and I can imagine knowing some of my Kirkpatrick relatives, it very well could be. :) I have several photos similar to yours. It was a great day we spent there.

Paisley, How interesting Douglas might be one of your ancestors! Wish I could find that I had some famous ancestors. :) I'm glad you had a wonderful day at Stirling too! Thanks for checking it out.

Wow, amazing pictures, Vonda. Especially the one of the Wallace monument. Imagine looking at that everyday. Thanks for posting!

Thanks so much, Vanessa! That would be an awesome view to see every morning! :)