Between 1538-42 James V, the King of Scotland, had this building, the Palace, built for himself and his French queen, Mary of Guise. A couple weeks ago, I showed you the outside of the building and the original Stirling Heads which adorned the ceilings. Below are the important rooms inside the Palace 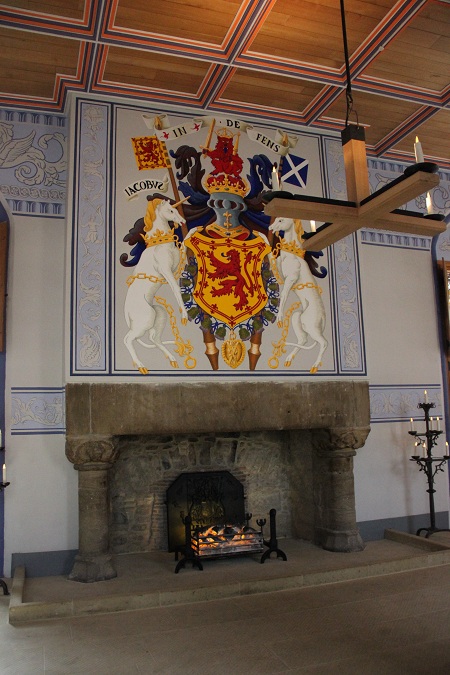 Above is the King’s Outer Hall. A sign on site reads: “Only people of some social standing were allowed into this room to wait for a possible audience with the king. Staff then decided who might be given the privilege of petitioning or conferring with the monarch. The chosen few were invited to enter the King’s Inner Hall.”

This oak door is original 16th-century and this was verified by dendrochronology. It is amazing it survived so many years given Stirling’s military occupation.

The King’s Inner Hall “Visitors had the opportunity to meet the monarch in this room. Access to the king was tightly controlled—it was a great honour. Look for the Royal Arms of Scotland above the fireplace. The king’s chambers are unfurnished as they would have been after James V’s death.”

The painted design at the top of the walls is called grisaille paintwork, designed to mimic relief-carved stonework. The fireplace with its carved eagle capitals is original. 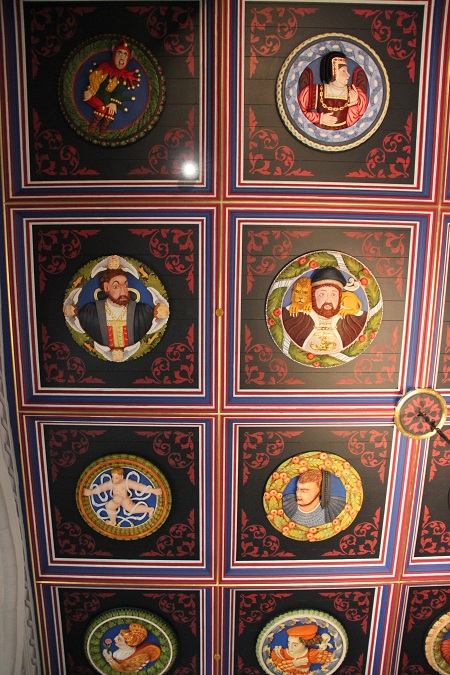 Recreations of the Stirling Heads reside on the ceiling as they would have in the 1540s, richly detailed and colorful. 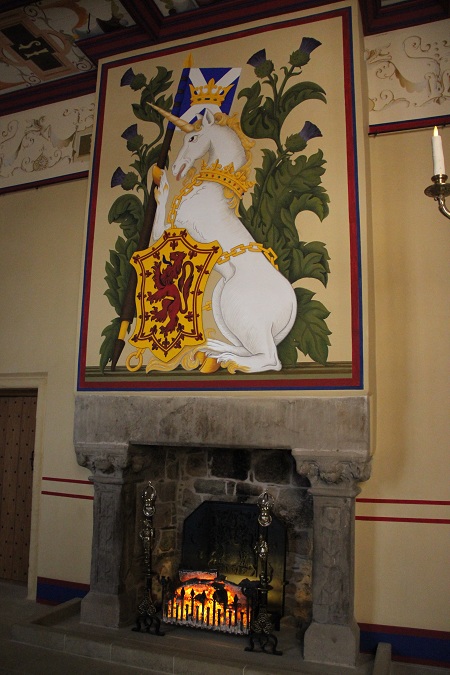 The King’s Bedchamber: “Only the most important visitors and personal friends met the king in the intimacy of his bedchamber. Can you see the unicorn, a royal symbol of purity and strength, over the fireplace? The monarch probably dressed, washed and prayed here, while sleeping in a small room nearby.” 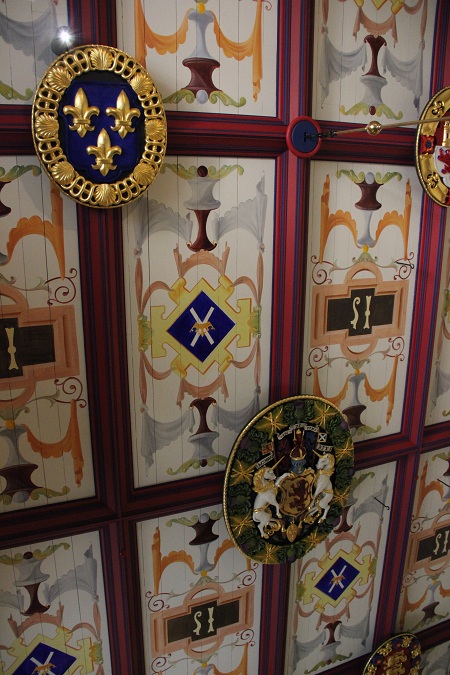 James V’s crown is alternated with his royal ciper I5 is shown on the ceiling of the King’s Bedchamber. You will also see the royal arms, and symbols of the great European chivalric orders.

King James V died in 1542 and may not have seen this Palace completed. This is why his rooms are bare as they were originally. Contrasting those empty spaces are the richly furnished Queen’s Lodgings. Mary of Guise lived here after her husband’s death and eventually assumed control of Scotland as regent.

The Queen’s Bedchamber is right next to the King’s Bedchamber. The ceiling shows an arabesque antique style, in gold leaf, centered on the heraldic arms of the de Guise family. Luxurious brocaded gold cloth hangs on the walls. Persian carpets are on the floor and table. 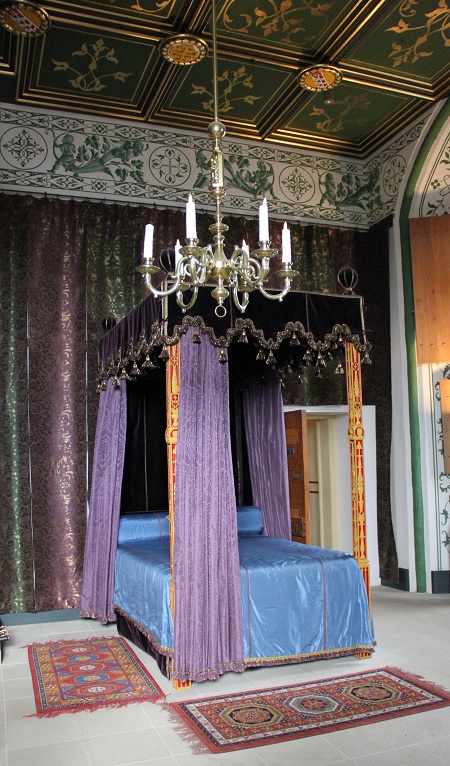 The Queen’s Bedchamber: “This room was reserved for the queen and her most important visitors. The great state bed was symbolic—she slept in a small room nearby. Look for three birds shot by a single arrow painted on the ceiling, the mark of Queen Mary of Guise’s family.” 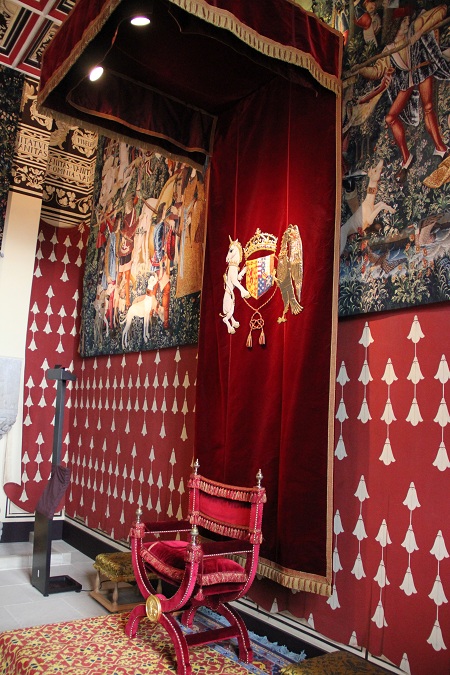 The Queen’s Inner Hall: “Honoured guests would be granted a chance to meet the queen in this room. The stools and benches were for her ladies in waiting. The newly painted ceiling includes portraits of James and Mary, though it may once have been covered with carved heads.” Experts believe this because there were more heads than would’ve been required for the King’s Inner Hall only. Plus a visitor from 1731 described “two of these ceilings set of with ye well carved busts.” The set of Hunt of the Unicorn tapestries displayed in this room are highly prized.
These new tapestries were commissioned by Historic Scotland and some were woven at the castle. Each takes two to four years to complete. They are based on the original set of 16th century tapestries now in the Cloisters Museum of the Metropolitan Museum of Art in New York. Based on remaining inventories, it is believed that James and Mary had a number of tapestries. A set could have cost as much as a new warship. This set contains 7 tapestries that tell the story of hunting the unicorn in order to obtain its horn, believed to have magical powers of purification. This story could have several different interpretations, from religious to romantic. 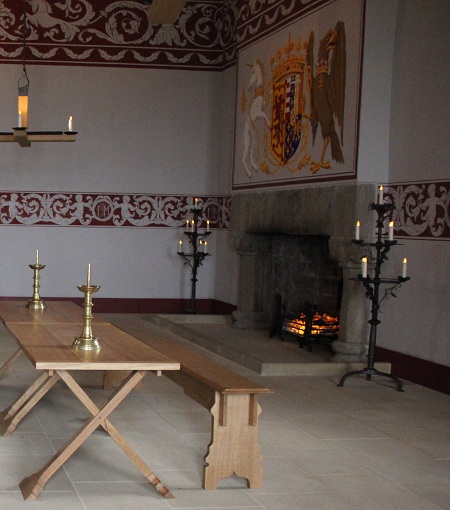 The Queen’s Outer Hall: “This was the waiting room for people hoping for an audience with the queen. Those selected by her staff then moved to the Queen’s Inner Hall. This room was also used as an informal dining room.”


I hope you enjoyed this visit to James V's and Mary's royal home.
Vonda
www.vondasinclair.com

I just love all your castle pics and the little history lesson with them!

Thank you again Vonna for this wonderful post.
Best
Cathleen

I hope you don't mind but I shared this wonderful post on FB and Twitter. Loved it!!

Thanks, E. Ayers, Cathleen and Maeve! I'm glad you liked it. I appreciate the share on FB and Twitter, Maeve! That's awesome! :)

What an awesome and beautiful place. Thanks for the history along with it!

Wonderful pictures and descriptions! I've never heard of a state bed used just for display. Do you know what those round black things are in the door? Was that to make the door stronger? I will attempt to pass this on.

Thank you for sharing those pictures. I hadn't seen Stirling Castle since the renovations and it is so much more than it was just a few years ago.

I remember seeing some of this when we were there. I am always amazed at the small sized beds. I realize they were shorter in those days, but those beds look small and so uncomfortable.

As usuall, I am not homesick for the motherland and love you for sharing your bounty with us.

Just fantastic, Vonda. Loved the pictures and the descriptions.

AMAZING pictures. Fantastic that all this survived and we can still see it today.

Thanks, Vanessa! I'm glad you liked it!

Carly, thanks! I hadn't heard of that either. I thought it was interesting. I think the black things may be bolts or something that holds the pieces of wood together in the door. I didn't look at it closely but it may be layered.

Jean, thanks! I'm glad you enjoyed it!

Angelyn, I'm glad I'm able to show you the pics then, so you can compare to when you were there. It is an amazing place!

Thanks, Paisley! That's true. The beds do look small and uncomfortable. It's a good thing they didn't actually sleep in them. :) Hope you get to return to the motherland soon!

Barbara, thanks for checking them out!

Roxy, thanks! I'm glad you enjoyed them! I love looking at old buildings.

More great pix, and wonderful history, Vonda. So uniquely Scottish. I love that the queen slept in a smaller bed. I'd hate to have to make that big one up every day!

Thanks, Pat!! I hope the smaller room was warmer and cozier. This one had such high ceilings I imagine it would be hard to heat.