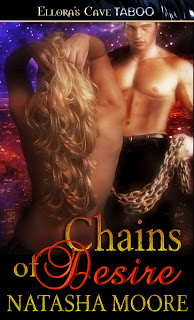 Acting as decoy for her princess, Hanna is captured to become a rival king’s sex slave. Chained in a spaceship, bound for a planet that deals in sex, she fears she’ll never be free. But then a sexy guard gives her hope as he makes her body soar with pleasure, even while bound in chains.

Everyone knows Masters never keep their slaves for long and they’re not allowed to fall in love. But it’s not long before Jarrod changes Hanna’s chains of bondage into chains of desire. Can they make it work against all odds?

Until then, here's an excerpt from Chains of Desire, which is still available from Ellora's Cave.

When he met her fearful gaze, she looked away. He cupped her chin in his hand and forced her to look at him. “You are a slave now. You must accept that. Your life will never be the same again. You are a slave.”

“No!” Her voice was soft now, barely a whisper.

He dropped his hand. “Have they told you anything?” She shook her head. Of course not. As a slave, she didn’t have the right to know a damn thing.

Her expression was still wary as she stared at him. After all, why should she expect him to tell her the truth? Jarrod understood that. Understood that she’d never trust again. But she deserved to know her fate.

“We are headed to the planet Noria. Have you heard of it?”

She shook her head slowly.

There was no good way to say it, so Jarrod stated it as plainly as possible. “You are to be the personal sex slave of King Barrus of Noria.” She gasped and backed away from him. The damn chains clattered again and he fought for self-control. “The other women will be sold to private buyers or to public brothels. There is a great market for sex slaves on Noria. Your women will bring a healthy price.” And he’d get a share of that money too.

She lunged toward him again. “You had no right to take us from our home. We are not property to be bought and sold. Not animals to be chained —” Her voice broke, but she jerked her chin up and glared at him. Unshed tears glittered in her eyes.

He let his gaze lazily sweep across her body, so she wouldn’t see how her words affected him. He’d stopped feeling guilty long ago for what he’d had to do to survive. He couldn’t help her escape her fate, even if he wanted to. All he could do was help her to survive.

“I hear you attacked the last guard. That’s why you’re chained up like an animal.” He shook his head. “Not a good idea, Princess.” No point in telling her now that most sex slaves wore cuffs and collars and chains for the rest of their days.


Chains of Desire is available both as a download and in print.