Today, we have as our special guest Arianna Skye talking about her first book which was just released.

At a young age, Arianna Skye discovered her love for the written word. She wrote her very first book about the woes of peer pressure at the tender age of ten. All twenty pages of it. When she was fifteen, she read her first romance novel and was hooked. Soon after, she knew this was what she wanted to write. At the age of eighteen, she wrote her first romance novel, a two hundred page handwritten manuscript, which she threw away. Bad Arianna!

After college and a slight detour into the world of technology, Arianna began her career as a technical support and help desk representative. Yes, she’s a geek. Deal with it. Then in 2006, she discovered writing again and found what she’d been missing. That, and she was getting sick of all those voices in her head nagging her for so long.

Arianna was born in Grand Rapids, Michigan and still lives in one of its small suburbs. Besides writing and reading, she enjoys a plethora of activities, ranging from swimming, arts and crafts, and messing around on her computer. She’s a geek, remember?

Welcome, Arianna! Please tell us about your new book! 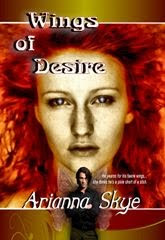 A fairytale, but not the kind your mother used to read you!

Rhiannon Kinsley's life goes from boring to downright crazy when a freak lightning bolt strikes her laptop. To make matters even more bizarre, strange words and symbols flash across the computer screen and she hears a mysterious voice. Time to call the men in white coats! Then Cerne Silverwing, an intriguingly sexy man, appears. He insists she’s a faerie princess whose fate will determine his own. What a crock! Now she knows who really needs those white coats.

With the Dark Faerie forces threatening his kingdom, Cerne kidnaps Rhiannon and brings her to Fey, a land where magic knows no bounds. He's performing a duty to save his kingdom and nothing more—a duty that will bring him his wings and the strengthened magic that comes with them. If he doesn’t unite with the princess as her consort, those wings will never grow. But this princess grew up in the land of laptops and instant messages, and she’s convinced they're both crazy. Despite their differences, the two are thrust together to defeat the whip-wielding Dark Faerie Queen before she takes over the kingdom. Passion and peril aside, will Rhiannon and Cerne discover their true destiny?

Sounds awesome! Please tell us about your favorite character in the book.

My favorite character? I have lots of them, each for different reasons. Rhiannon for her snarky and sarcastic attitude. Cerne for his stubbornness. Korrigan for her ability to remain strong despite the torture her sister puts her through. My favorite character to write was Lilith. She was EVIL. It was fun to push the envelope with her cruelty and even greater fun to see her get her comeuppance.

Sounds like a wild and interesting cast. What element of story creation is your favorite?

I love the world-building. In a fantasy type settings you can really let your creativity soar (no pun intended.)

That's true. What element of this story was the hardest for you?

To be honest, this was one of those stories that seemed to write itself. I was a fairly new writer when I started it, so I guess I learned how to get a better grasp on GMC.

I love those stories that write themselves. What inspires you? What motivates you?

Many things in everyday life inspire me. A tree shedding leaves, a terrible snowstorm, or even a creepy bush that looks like a demon (which actually ended up in one of my books). It’s even more rewarding to find a way to incorporate these inspiring things into the story. As for motivation, seeing the words THE END motivates me. There’s nothing more rewarding than finishing a complete manuscript. Actually there is… selling that said manuscript. :-)

That bush sounds scary. :)What is your writing process or method?

I am a plotting pantster. I start with a loose plot but the characters usually follow their own journey to arrive at the final outcome. That’s when I know the story is good. If I have to force them to do something, then I need to re-evaluate what’s going on.

That's an excellent way to look at it. What's next for you? Can you tell us more about your newest big offer? Hint, hint! ;)

Wow, Nicole, you certainly don’t beat around the bush, do you? *chuckle*

I try not to. LOL

Well, I suppose it’s time to let the cat out of the bag. I was recently offered a contract to publish a series of four humorous paranormals from Sourcebooks under my other pseudonym Sidney Ayers. The first one will be available sometime in Spring of 2011. It’s funny because the book is actually set in the winter, with the backdrop of Christmas. It is not a Christmas themed story though. We are currently negotiating a title, so that’s all the information I can give you all.

That's wonderful! Congratulations!! And thanks again for being our guest today! Everyone, if you'd like to buy Wings of Desire, click here. Arianna loves hearing from her fans! You can connect with her on Twitter and Facebook or send her an email.

Thanks for interviewing me, Nicole. I've also decided to give away a free book to one lucky commenter. So, comment away, people! :-)

Great interview, Arianna and Nicole! Wings of Desire sounds like a fantastic read (no pun intended either!). Best of luck with it.

I enjoyed reading this interview, ladies. Congrats on your first release, Arianna, and congrats on the new deal! That should keep you out of trouble for a while :-)

Congrats on the release - it sounds intriguing - and on your new series!

Enjoyed the interview, Arianna.
Congrats on your release. It sounds great!

Thanks for stopping by Cate. By the way, I have a confession. I love puns. Hahaha.

Pat, thanks! As for trouble, I think I might find a little time to stir up a little every now and again. :-)

Carly, Thanks. I am uber-excited about both. It all happened so fast that I am still a little shocked.

Maggie, thanks so much. It was fun story to write. I hope people love it as much as i loved writing it.

What a fantastic story. It has all the elements I like, romance, passion, humor, and fantasy. I would love to read it.

Congrats on your release, Arianna! I'm not sure if you remember, but we met at RomantiCon (yeah, it was in the bar, and late at night, LOL). Hope to see again this year!

Hi Arianna! Good to see you here. I met Arianna at RomantiCon too :) Congrats on your release!

Great interview and a good idea about the flavor of your book. Good luck!

Thanks to everyone for visiting and commenting!