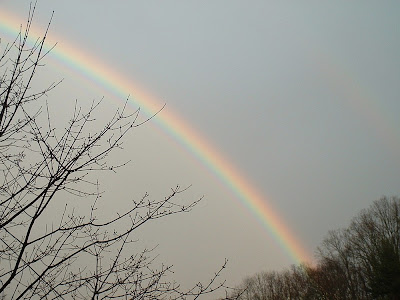 This rainbow appeared outside our house a couple days ago. I will take it as a sign of good things to come...a pot of gold, you know. ;-)

I usually comment on Lost but this week I'm still processing. They promised the answers to 3 burning questions?? I only saw the answer to one, maybe two. The first question was... what do Jack's tattoos say and mean? "He walks among us, but he is not one of us." That's what it says but not what it means. The meaning is something more like lonely leader? I would have to watch again to fully grasp the meaning, I suppose. The second question, I'm assuming was...where do the Others live? I think the answer is a cruise ship. (??) Not sure what the 3rd question was, unless it was ...will Ben live? So far, yes. Other highlights of the show, Kate wants to impulsively turn around and go back to save Jack. Sawyer doesn't. But it isn't all black and white. Sawyer isn't being the bad guy. He thinks Jack wouldn't want Kate to put herself in danger and neither does Sawyer, plus they don't really have backup or weapons yet to fight the Others. I really like the way Kate stands up to Sawyer when he tries his bossy, caveman tactics. Haha, they're fun to watch. As for the weird stuff...strangely, I like the way this show confuses me. I like to figure out things and it is never boring.

I made it to the next round of Karin Tabke's first line contest. Woohoo!! You will see my next line on the Feb 19th post, comment #34 here. Results of this round will be posted Monday, Feb. 26. Best of luck to the other entrants!!
By Vonda Sinclair at February 24, 2007
Email ThisBlogThis!Share to TwitterShare to FacebookShare to Pinterest
Vonda Sinclair
Vonda Sinclair writes Scottish historical, paranormal and contemporary romance.

Congrats on making it to the next round! Your entry cracks me up. :-)

LOL! Thanks, Vanessa. I'm having fun with it.