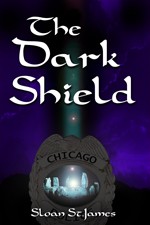 "If love conquers all, can it defeat death?"

My long-time friend and critique partner Sloan St. James had a book released recently. I want to tell you about it and ask Sloan some questions.

The Dark Shield is a story that takes you from the backstreets of Chicago to the war-torn ones of Belfast. For twenty years, Chicago cop, Conner Wolfe, has questioned why it was his life that had been spared instead of his older brother's. It's when a bust goes bad and his partner is cut down, the demand for an answer ravages Conner's mind. He realizes that even under the threat of being imprisoned for treason, Conner must return to Belfast. While there Conner is reunited with the young and tenacious Di O'Dea.

Di's vocation is to save lives. However, she's unable to stop her brother from joining an Irish faction that could get him killed. When Conner arrives, she's sure her prayers for help, and her heart's desire, have been answered. At the age of five, Di had fallen in love with Conner. For twenty years she's prayed for his return. When he does, she's overjoyed, knowing he'll save her brother and that she and Conner will at last be together.

However, when he's forced into a promise, Conner rejects her love and it's then that he's made to come face to face with death again. While witnessing an ancient Druid ritual of soul switching, Conner finally understands. He's been spared so that he can make the supreme sacrifice, but will death accept the tribute, or will it be sated with the murder of true love?

Vonda: What inspires you? What motivates you?

Sloan: I think what motivates me is what motivates all writers, our love of writing. What inspires me to write is this drive that we all feel. It's an entity in and of itself that we have no control over. We write for the love of it, and nothing can keep us from doing it. The manuscripts we create, the ideas that run though our minds give us a rush. We're addicted to this and even if we're never published, we'll still write.

VS: What is your writing process or method?

SS: My writing process is probably a little odd. Usually something will trigger an idea and I'll toss it around in my head for a while. Then I sort of watch a movie. I guess you could call that plotting. After I get things clearer in my head, I'll write dialogue. I'll go back through the manuscript and add dialogue tags. The last thing I do is go through the manuscript again and write scene descriptions. That's three times I've gone through the manuscript even before I start to edit. I can't tell you how many times I go through to edit. Some scenes just jump up and they're perfect the moment I type them into the computer. Other scenes, especially the first scene, could be rewritten fifty times before I feel it's what I want.

VS: Do you have any advice for unpublished authors?

SS: Remember that NO ONE has a right to take your dreams away. NEVER, NEVER give up the hopes of getting published. Work toward that dream every day. Read and write constantly. Don't just read the genre you're writing. Widen your choices to include every avenue of interest you can think of. You'll grow and love the results.

More about Sloan:
Sloan St.James writes Celtic paranormal women's fiction and has had two books published, THE DARK PLAIN and THE DARK SHIELD. The third book in the series, THE DARK LEGACY, will be a September '07 release. Her writing awards include a prestigious PRISM Award, Booksellers' Best, and the Golden Quill. She is the treasurer of Celtic Hearts Romance Writers and the president of the Elements of RWA chapter.

Thank you for being a guest at my blog, Sloan! Please visit Sloan's website at http://www.sloanstjames.com/ to find out how to purchase her latest book.
By Vonda Sinclair at February 02, 2007
Email ThisBlogThis!Share to TwitterShare to FacebookShare to Pinterest
Vonda Sinclair
Vonda Sinclair writes Scottish historical, paranormal and contemporary romance.