Having a Fantasy Filled Day

A young woman in medieval dress and a white horse

The Magic of Inherian: Scepter of Salvation, Book 1

Ebook By Terry Spear
Category: Fiction » Young adult or teen » Fantasy
Princess Talamaya turned 18 in the human kingdom of Damar, just like her twin brother. Only when she comes of age, she must wed the king’s choice. When her brother comes of age, he’s allowed to sit on the council. But everything changes when a wizard pits beast and man against each other in Inherian–all because of the loss of the Scepter of Salvation and she must return it to their kingdom.
Princess Talamaya and her friends, Lady Kersta and Lady Mexia, must retrieve the Scepter of Salvation when her brother is poisoned.Visions plague Talamaya of a world beyond her own, of a destiny she has to fulfill.But the barbarian king is also after the scepter, and the black-hearted wizard who is trying to gain control will do anything to keep them from retrieving it.
She must free a knight from his madness.
Help a female dwarf escape from the dwarven mines.
Aid an Amazon fighting the Dark Elves.
Rescue even the barbarian king.
Save a crusty old dwarf from the wolves of Elan Pass.
And outwit the dark wizard once more.
Above all else, she must always take the path of righteousness.

Which is much easier said than done.
Amazon
B&N
Smashwords
Kobo
Audible

She has to learn her magic skills to save their world, but if she can’t attend the school of magic, how will she ever be able to aid them?

The Magic of Inherian: The Mage of Monrovia, Book 2

An apprentice of the mage they had destroyed earlier, now threatens Inherian once again. But when Mexia arrives at Langdon to become school trained, she learns the school will not permit a woman to attend. But she must destroy the mage’s apprentice, and she cannot do so without the training. She must use the magic she has learned to discover a way to defeat the apprentice before it is too late.
Mexia has already done much more than most school- trained mages when she and her companions had gone in search of the scepter of salvation. But now one of the apprentices of the evil wizard they had destroyed, has stolen his spell book and plans to take up where he had left off, and she has to try and stop him.
Mexia believes the only way for her to defeat the mage is to become school trained like he was with the eventual goal of becoming a high wizard–the first of her kind in Inherian. But the current headmaster denies her entrance because she’s a woman. Though if she can get the former headmaster’s recommendation, she may attend.
And that’s the beginning of the trouble.
First, there’s the wizard.
Then, the immovable headmaster.
And then, the circle of misfortunes.
It all goes downhill from there…

When I saw this dwarf in the gardens, I thought of my fantasy trilogy. Which, I need to still finish. The story is: I wrote the first two, had the idea for the third, couldn't sell the first two, this was in the dinosaur time before ebooks and indie publishing, and so I put it on hold. THEN, I sold other books to publishers and was so busy writing them, and new books, and more new series, and more and more and more, and...well, you get the idea, don't you? 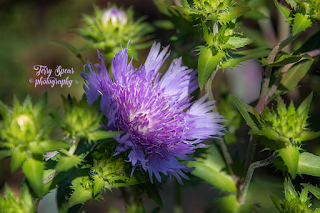 I have started on it, but I have edits on Flight to finish today, need to finish writing Bounty, and I've been thinking about Billionaire.
*sigh* 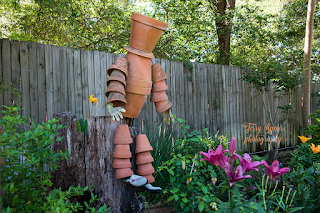 But right after this, it's time to reread Flight and make sure it's ready to turn in.

I did finally plant the flowers this morning, and dug up some of the grass. I need to keep working on that though. :)  And I saw a hummingbird flying around the birdseed feeders. The flowers I planted are all hummingbird flower plants and butterflies love them too.
Some days I want to just slip into a fantasy.
Enjoy your day!!! Hope that it is just as magical. :)