I'm so excited about CHOOSE ME, book #1 in a series of small town romances featuring silver fox heroes and vibrant heroines getting a second chance at happiness. It's now available through several vendors and will soon be available in print as well! 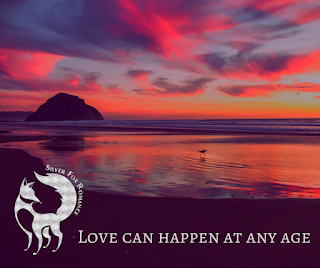 I thought I'd share another small excerpt from CHOOSE ME. It's a friends-to-lovers romance and that's one of my favorite tropes. Rick and Eve have known each other for over twenty-five years and when they are suddenly both single, things start to change...

Eve couldn’t stop thinking about the fact that Rick had been naked while she’d been talking to him. Naked. Nude. Sans clothing. All that masculine skin with nothing covering it. She blew out a shaky breath.
She’d seen him in swim trunks often enough over the years. Both of their houses had pools, and since Amy and Heather had been joined at the hip for most of their lives, and Eve and Cathy had been friends, the two families had often been at one or the other’s houses.
But that was back when he’d been Cathy’s husband. When she’d been Don’s wife. Back then Eve had been able to appreciate a good looking man without coveting him or getting turned on. Those kinds of thoughts had never even crossed her mind.
But now…as she paced the scarred hardwood floor, Eve found herself getting all tingly at the thought of Rick having been naked while they shared words. And even more shivery knowing he was rushing over here as soon as he covered up that naked body.
What was wrong with her?
Crazy as it was, she dashed into the outdated bathroom to check her reflection in the mirror. Her hair was a mess. She shoved her fingers through the strands, trying to fluff them up a little. She’d left her purse, and the brush inside, down in her shop and she didn’t have time to run down and get it now. Her lipstick was down there too. She bit her lip. Her face looked so pale when she didn’t have lipstick on. At least she was still in the dress and heels she’d worn for work, so she felt as if she had at least some of her armor in place.
What was she getting so worked up about? This was Rick. She’d known him for years. He’d seen her hundreds of times. It wasn’t as if he was going to care what she looked like. He was coming to look at the apartment, not her. She should be getting her thoughts together on the work she’d like to have done, not primping in front of the mirror.
There was a knock at the door at the bottom of the stairs. “Eve?”
Rick.
Eve dashed to the stairs and then forced herself to slowly descend the steep steps. Her foolish heart was beating wildly. She seemed to have no control over it. She crossed the entryway and took a deep breath before she opened the door. “Hi. Thanks for coming right over.”
Rick was one of those guys who seemed to get better looking as he got older. While he’d been long and lanky, almost skinny, when he was younger, he filled out a pair of jeans and a T-shirt real well now. The silver at his temples and threading through the rest of his hair sparkled beneath the light. And the crinkles around his brown eyes when he smiled?
There were those tingles again.
Eve realized she was just standing there, blocking his entrance. She cleared her throat and hoped the heat she felt in her face didn’t stain her cheeks red. “Come on in.”
He had a clipboard in one hand and began his inspection as soon as she closed the door behind him. “This is a nice-sized foyer. Is there anything you want to update in here?”
Straight to business then. She frowned and looked around her. “I hadn’t thought about it.”
He pointed down with the corner of the clipboard. “The floor is worn and some corners of the tiles are coming up. It wouldn’t cost much to replace it with a durable vinyl that would withstand the rain and snow. A new coat of paint on the walls would brighten the space and you could get away with keeping that old ceiling fixture. It adds character but not a whole lot of light.”
Eve nodded slowly, looking at the space with new eyes. He was right. “I can see you know your stuff.”
The corner of his mouth quirked up. “Did you have any doubt?”
Her breath caught on a laugh. What was wrong with her? The first thought to pop into her head was, I’d like to see your stuff.
“Um, come on up. I think the stairs are safe and sturdy.”
“Lead the way.”
Rick followed her up the stairs and all she could think about was him staring at her ass. And that she liked the thought of him staring at her ass. It was as if she’d been dropped into an alternate universe.

I had such a good time writing Choose Me and the next book in the series, Rescue Me, which will be coming out in November. If you like small town romances, or friends to lovers romances, or firefighter heroes, or seeing women of a certain age get a second chance at happiness, I hope you'll try CHOOSE ME!