Hi, y’all! Multi-published and award-winning author, Nancy Lee Badger, here, announcing my 17th book, which I set on the Isle of Skye. Skye sits just off the west coast of Scotland, and is part of the Inner Hebrides. It has an unusual set of mountain peaks and endearing glades called fairy pools. I had heard tales about fairy pools, carved by snow as it melted into crystal-clear rushing water, though some claim Scottish fairies had some hand in their creation. Numerous waterfalls cascade down the dark volcanic slopes of the Black Cuillin Hills. My new series, Clan of Dragons, is a paranormal romance set centuries ago, and I chose to use the fantastical aspects of Skye as the location of my dragon’s lairs. I could picture my dragon-shifters perched on the precipices of these dark and forbidding peaks. I decided to set the village of Morbhan to the west. The inlet between Skye and the mainland was a perfect place for my pirates to drop anchor. 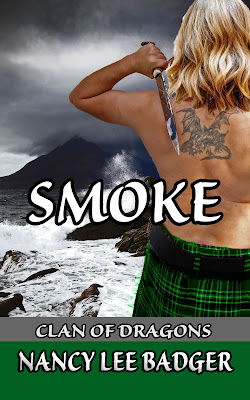 Research is a word that makes many writers cringe. You want to write your story, but readers expect accuracy. Wanting to use an actual location, I needed to research the island, its creatures, the plants, and the climate. What kind of herbs would my characters use? What flowers would my female characters smell like? Were there forests, meadows, peat bogs? What were the trees like? Did they lose their leaves in the winter, which is when SMOKE takes place?

All these questions needed answering before I could share my characters’ way of life. Skye has some forests and both evergreens and deciduous trees. The rowan tree grows prolific in the Highlands and islands of Scotland, especially along the banks of the fairy pools, and its edible berries feed the birds and forest animals, while the broadleaf tree gives them shelter.

The island is surrounded by the sea so seafood, and pirates, can affect my characters. The legends say Selkies ply the waters. These mythical creatures live as seals, but can strip their skin on land and walk as humans. Sharks thrive in the cool waters, where the currents can change as quickly as the weather. Snow falls in the winter, so farming the land and harvesting enough food to survive until spring is imperative. My characters must be aware of their surroundings, especially when wolves and dragons are about.

Book Blurb
Wynn, a green dragon, tumbles off a hill, landing in snow. Sensing someone above his head, he jumps free, and accidentally slams a wolf against a tree. When the wolf shifts into a naked human female, explanations are in order. When she wakes, and Wynn says he means her no harm, she allows his human brother to carry her into a cave, where Vika cares for her. Wary about the golden-haired shifter’s mission, Wynn fears for her safety, and his heart.

While tracking the human who murdered her lover, Kera awakens to find a dragon staring at her. With no energy to shift back into her wolf form, she allows Vika, a pretty human, to care for her. The dragons take up her search for a killer, but the pirates close in and she leads Vika to safety.
In the village of Morbhan, Toal abducts her and Wynn fights him. Her wolf pack wants her back, but the dragon has stolen her heart. Will she stay, return to her pack, or die while trying to kill her lover’s murderer? Either way, their lives will forever change. 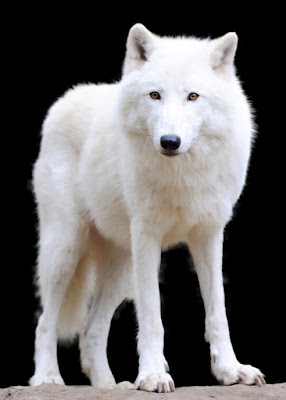 Excerpt from SMOKE: Clan of Dragons Book #2
“If Toal has set his sights on Kera, and has hurt her in any way, he will die this day,” Wynn said.
The wolves howled in agreement.
The shift was quick, and he prayed the thick trees hid most of the brilliant blinding light. His bones snapped, and his fur morphed into human skin and muscle. His naked flesh immediately felt the cold, and he would look for clothing the first chance he got.
He turned toward the alpha wolf from Kera’s pack, straightened his spine, and shoved his shoulder-length light gold hair out of his eyes.
“Remember how I look. I will find clothes, and though I might smell like our quarry, please do not eat me, aye?” The wolves howled, and spread out to circle the manor. No human would escape the wolf pack’s ring of death. Night had fallen, and he wished the moon was not so bright. Crouching, he headed for the back of the building. The wind had lessened, and the snow near the back of the house was not as deep. The rear door was free of drifting snow, leaving him easy access. No lights flickered from the windows, but curtains or shutters could hide candlelight.
He had never been inside a building, before, but Vika had described the interior of her cottage. Over the last couple of months, she had shared stories about large manors and castles, though she had never ventured inside such a structure.
“Dragons used to live in castles,” she’d said, but the stories came from the Highlands of Scotland. Here, on the Isle of Skye, the Black Cuillin Hills were dark, dreary, and uninhabitable to humans, which kept them away from their secret lairs. He liked the caves, and enjoyed dips in the numerous fairy pools during the summer months, and the underground river in winter.
An image of a naked Kera, perched on his lap while he washed the dirt from her back rose so fast, he hardened to stone. “Forget the past. If I cannot rescue her, there shall be no future.” 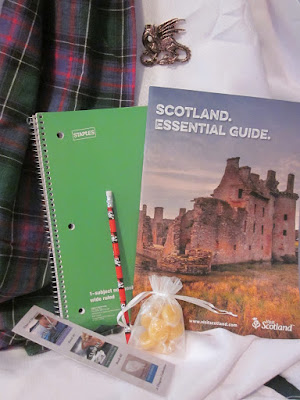 Thanks for having me on Fierce Romance.

Congratulations to Jessica C., winner of my Scottish Prize Package!

So nice when you discuss the writing and research of your books. Good information and the book sounds great.