I'm happy to say our anthology, Captured by a Celtic Warrior, has been released!! 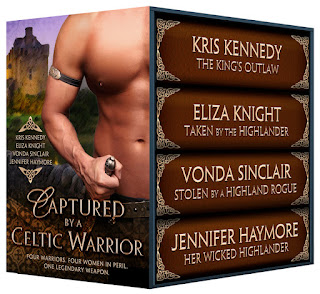 Bestselling and award-winning authors bring you four never-before-published novellas of searing passions that span the ages. Four fierce warriors from Ireland and Scotland... Four heroines determined to resist them... One dagger steeped in the blood and treachery of kings.The King’s Outlaw, by Kris Kennedy1193 - Outlawed and on the run, Tadhg O’Malley has one mission: escape with the valuable dagger of Jerusalem before a brutal nobleman hunts him down. Trapped and almost cornered, his plan is simple: kidnap the innocent merchant with the long hair and complicated eyes. Igniting a raging passion is not part of the plan. Neither is falling in love. Both endanger their lives, his mission, and with it, the kingdom.Taken by the Highlander, by Eliza Knight1306 - A week before Lady Rose Munro is to wed a neighboring laird, she is abducted on the road by a wicked and dangerously handsome stranger. Highland warrior, Malcolm Montgomery has been ordered by King Robert the Bruce to steal Rose and her son from the suspected traitor she is about to marry—gifting him with an ancient and much sought after dagger as payment. Rose shouldn’t trust her captor. Shouldn’t feel her body heat at his simple touch, or allow him to press his fervent lips to hers… Malcolm shouldn’t be seducing the woman he is sworn to protect. Shouldn’t desire her, for she’s not meant to be his… Succumbing to passion threatens them both, and falling in love is absolutely not an option. Stolen by a Highland Rogue, by Vonda Sinclair 1619 - When the infamous dagger is stolen from Highland chief, Dugald MacKerrick, he will do whatever it takes to reclaim it, even abduct the wife of the aristocratic thief, but what if his beautiful French hostage isn't who he thinks she is? Deep in the rugged Scottish Highlands, Dugald discovers not only is his captive, Camille Bouchard, more than he expected, so is the passion raging between them, threatening everything he thought mattered to him.Her Wicked Highlander, by Jennifer Haymore1816 - Maxwell White is the newest member of the Highland Knights, an elite mercenary group sworn to protect the Crown. His first assignment is to keep independent and spirited Aila MacKerrick safe from a madman determined to get his hands on a treasure she unwittingly possesses. But Aila isn’t going to simply allow some Highlander—as handsome as he might be—to capture her and whisk her away to an abandoned castle. She’ll fight to the death for her freedom...as soon as she rids herself of this pesky, insistent desire that makes her far more inclined to run into his arms than away from them....

Here's an excerpt from my story, Stolen by a Highland Rogue: 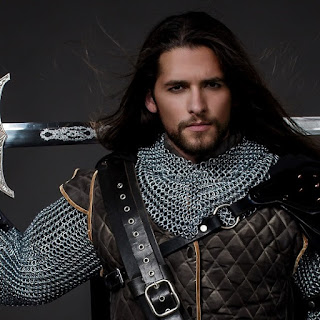 Camille Bouchard sat in the common room of the White Ram Inn, eating her midday meal, even though it was well past noon. When the large, commanding Highlander in a belted plaid had strode in earlier, bold as the brass studs in his leather armor, she had almost choked on her roasted lamb. Sacrebleu! What a striking and gorgeous man he was, with long hair, dark as midnight. On second glance, she saw that his green eyes were angry as a stormy sea. What had riled him?
Not glancing her way, he sat at a nearby table and was, at present, arguing quietly with a beautiful and well-dressed, dark-haired lady. Camille wondered at their relationship until the man called her "sister." That explained their slight resemblance.
Although Camille could not understand much of what was being said since they were trying to keep their voices low, she found she enjoyed listening to the Highlander's deep, rumbling voice.
Camille's cousin, Angelique Drummagan, Countess of Draughon, had married a Highlander the year before. After a very rocky start, their passionate marriage had turned into a happy one and they were expecting their first child in a few weeks. Camille had come to Perth with a couple of servants to shop for the supplies Angelique would need upon the arrival of their new babe. 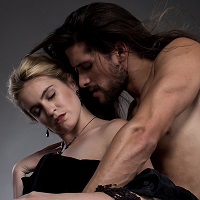 Camille sent another quick glance toward the brawny Highlander at the other table. In truth, she could hardly keep her eyes off him. Short beard stubble darkened and defined his stubborn jawline. His shoulders were as broad as one of the distant Cairngorms. His proud and confident bearing told her he was someone of importance, perhaps a leader. A chief? His clothes did not look new or expensive, however. Mayhap a war leader? Of a certainty, he appeared to be a strong warrior.
She glanced down at his plaid-covered thighs and muscular calves, sprinkled with dark hair. Good heavens, how she loved Highland clothing customs which showed off a man's fine form. Her mouth suddenly going dry, she took a large sip of spiced wine.
The Highlander's sister shoved to her feet, her mouth dropping open. "I cannot believe what a brute you are being about this, Dugald!"
His fist clenched upon the table. "I am most serious and determined in this," he growled.
With a huff, the woman stormed up the stairs.
Parbleu! What had the argument been about?
The Highlander—Dugald—arose and, with angry strides, left the building. Was he truly a brute as his sister had said? Why should Camille care? Oui, she had been searching for a Scotsman of her own for many months, and he was a most attractive man. But she had no need for a brute. 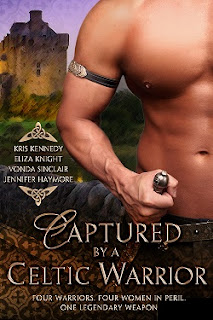