My adventure in Santiago and Buenos Aires

Jenna Ives and I are back from our month-long adventure in Chile and Argentina. I’ll let her tell you all about her tango lessons and the Rolling Stones shows, but I most enjoyed seeing the sights and meeting 22 relatives I never knew existed!

The highlight of the trip for me was definitely Buenos Aires. A big city with a very long history (founded in the 1500’s) and with such drama! Spanish, English, French influences, military dictatorships and now democracy.

Did you know Buenos Aires features the widest avenue in the world? At over 300 feet wide, 9 de Julio Avenue has six lanes going in each direction. The name honors Argentina's Independence Day, July 9, 1816. 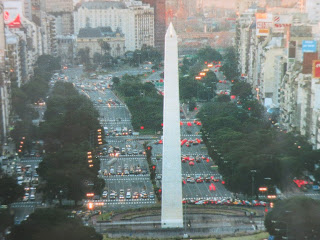 One of my favorite things during our time there was visiting La Recoleta Cemetery. 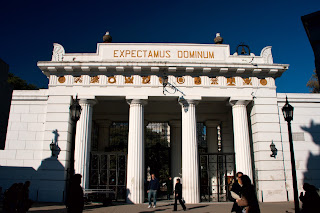 In the middle of Buenos Aires, it is literally a city of the dead, with wall-to-wall mausoleums set like apartment buildings along perfectly laid-out streets and avenues. 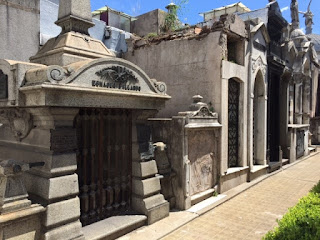 I went primarily because Eva Peron is buried here in a very modest mausoleum where people still leave flowers on the door even 60+ years after her death. 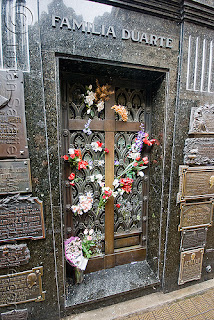 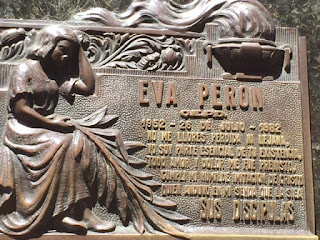 But there is so much more to see! Like this monument, a young woman's grave (Luz Maria Garcia Velloso). Her crypt is marble, and there's a statue carved of her lying on top with long, flowing hair, obviously a beauty. It has an actual stained glass roof and is completely open in the front, so you can literally reach in and touch her crypt. Beautiful, if a little creepy. 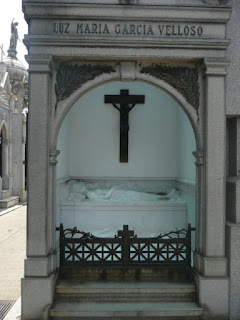 There's an urban legend about Luz Maria, who died of leukemia at the age of 15. Men walking near Recoleta Cemetery reported an encounter with a young woman dressed completely in white. The story goes that this woman would accompany them to a bar, get a chill then ask to borrow their jacket. Next she would accidentally stain it with whatever they were drinking and take the jacket with her when they said goodnight. The following day, the man contacts her mother to get the jacket back, and the mother explains that the young woman is dead! He then goes to the cemetery and finds his jacket draped over the marble-carved effigy. [shiver]

La Recoleta visit aside, the other highlight of my trip was meeting almost two dozen of my long-lost relatives! It seems my great-grandfather remarried after his first wife died and moved his second family to Buenos Aires. The relatives threw me a big party and cooked tons of local specialties…Argentine asado and empanadas… and welcomed me with open arms. It was five hours of love and laughter, despite the language barrier. Luckily, hugs and kisses need no translation!

How about you? Ever take a vacation that affected you so profoundly you’ll remember it forever? Please share!

Sounds like a wonderful trip! I am a fan of well-done cemeteries, but I also get claustrophobic, so I don't know if Ricoleta would work so well for me. Mountainview Cemetery in Oakland, California has some lovely mausoleums, but they are set far apart from each other on a rolling green lawn with deer and ducks. More my speed!

I want to go to Buenos Aires. Although I'd rather see Patagonia if I get down that way. I have been to Chile. Hope you'll do a blog on that soon. Such a beautiful country.