Wanna Get into Some Trouble?

Sometimes on my blogging days I will promo an author who is published by the same company as I am, and today is one of those days. Her latest book is about to be released--more on that next week--but the first in the series is available right now. Trouble Magnet by Cat Cervantes is kind of a chick-lit spy novel with a little bit of sexy romance and humor thrown in for good measure. If you love chocolate, Paris or shopping, or you picture yourself saving the world some day, then you'll probably like hanging out for a few pages with Finn, the intrepid CIA newbie in Trouble Magnet and Double Trouble. Here's the description: 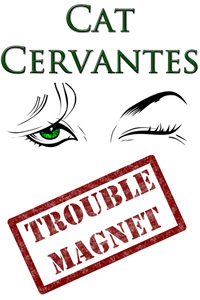 A recent graduate of the CIA’s latest initiative to get more women into the operative ranks, chocolate addict and shopaholic Regina “Finn” Finnegan is on her way to save the world after an embarrassingly short training stint. Promised Paris but landing in Houston surrounded by burly mercenaries, she’s more likely to shoot someone else’s target on the firing range, cause a brawl, or get her high heels caught in a grate while on assignment. However, with sarin gas coming into the United States, she’s ready to stand up to anyone to stop it.

Mercenary and CIA asset Nick Costa is a man who’s used to getting what he wants, and right now he wants to find who’s at the center of bringing nerve gas into the country. Well, that and the CIA rookie who is both distracting and intriguing. He’s got the shipment in hand but not the buyer or the target, and dragging the rookie with him may get them both killed. Finn battles Nick’s advances, spars with his team of mercenaries and goes head to head with her CIA boss who wants her off the team, but whether she’s pushing a dead man off her or passing herself off as an art expert, Finn doesn’t believe in no-win scenarios. By the seat of her pants she’ll argue, fight, cajole and throw herself in harm’s way to find the buyer who would unleash nerve gas in the United States and once again derail her trip to Paris.