Taking a gondola up the mountain of Aonach Mor, in the Nevis Range in Scotland, was an unusual experience for me. Ben Nevis is the tallest mountain in Scotland and all of Britain at 4409 feet (1344 meters) high and usually has snow on top of it into the summer. Aonach Mor is two mountains over, in the same range, and is 4006 feet (1221 meters) high. 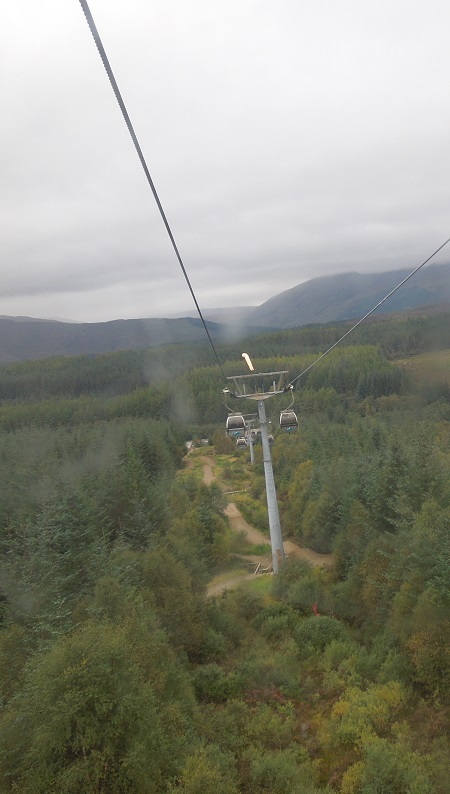 I took some pictures from inside the gondola. The plexiglass windows were scratched so there are some blurs.

This area, near Fort William, is famous for skiing, mountain biking, and all sorts of outdoor sports. It also has Britain's only mountain gondola. This gondola took us 2150 feet up the side of the mountain. Two walking trails are at the top and we'd hoped to walk at least one of them to take in the amazing panoramic views. Well... it didn't quite work out that way. :) For one thing it was very cloudy and misty so the views were almost non-existant. For another, the side of this mountain must have been one of the absolute coldest places in Scotland. Even though it was September, it felt like January during a blizzard. It was misting an icy cold rain and the wind was blowing like crazy. Although we were bundled up pretty good, there was no way we could stand to hike in this low temperature without a lot more clothes, which we didn't bring. We walked around a bit, took pictures, ate lunch inside at the Snowgoose restaurant and shopped. 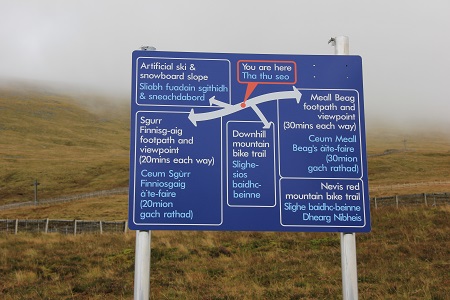 Based on the information in the guidebook, sometimes they experience a temperature inversion. In other words, it's warmer on the mountain than in the valley below. Not on the day we were there! :) Scotland's weather is incredibly variable. Snow is possible at higher altitudes in Scotland at any time of year. Sometimes they ski in June at the Nevis Range.
Aonach Mor is Britain's 8th highest mountain. The Ben Nevis volcanic complex was formed around 425 million years ago. It is made of granite which was formed deep in the earth's cruse and pushed upwards as a molten mass before cooling. The rocks surrounding the volcanic complex are sandstone, mudstone and limestone from 600 million years ago. These were formed under the sea and pushed upwards as the continental plates were pushed together. This upheaval helped create the Great Glen fault which runs through the area below Aonach Mor from Fort William in the west to Inverness in the east.

To give you an idea of how cold it is here in the high mountains, Coire Leis, in the shadow of Ben Nevis, holds snow for at least ten months of the year. The guidebook says it's not unusual for them to have 80 - 100 mph winds at this altitude which is why trees don't grow above about 250 meters. In places with long-lasting snow, rare plants grow. The snow lies in a gully on the face of the mountain in the shape of a snowgoose, which is how the Snowgoose restaurant got its name.

Most of Aonach Mor is designated a 'Site of Special Scientific Interest' in the Ben Nevis and Glencoe National Scenic Area. This restricts certain activities that might cause lasting damage to the fragile habitat. This is why people are discouraged from hiking to the top of the mountain in summer. 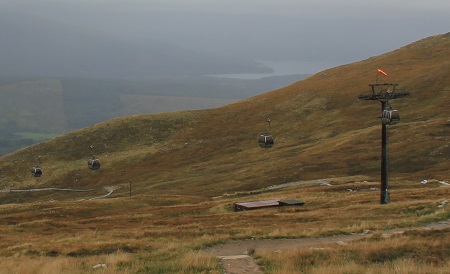 The gondola has 75 cabins that rotate in a continuous cycle during operating hours so there was no wait time for us. The trip up the mountain took twelve minutes. 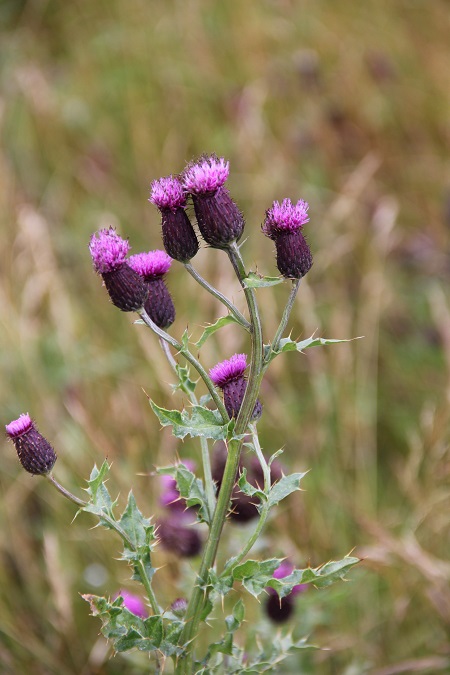 Beautiful thistles were growing on the side of this icy mountain. I would recommend a visit to Nevis Range, but only on a sunny, clear warm day, unless you love extreme winter sports. LOL Thanks for taking this chilly tour with me. :)

Beautiful and fiercely protective of those she loves, Lady Seona Murray captured Keegan MacKay’s attention when she first set foot in Dunnakeil Castle. Though she is a chief’s daughter and forbidden, Keegan has fallen in love with her from afar and burns to possess her. But so does the clan traitor, Haldane, an obsessive outlaw bent on murder and kidnapping.
Sinfully handsome, Keegan MacKay is a fearsome guard as well as the chief’s cousin, but Seona’s father would never consider him a worthy husband for her because he is not a titled laird. Seona has secretly watched the sensual, tawny-haired warrior from across the crowded great hall for months, but when he is tasked with escorting her across Scotland, back to her home, their simmering attraction flames into sizzling passion with just one kiss.
Though she fears she is endangering Keegan’s life, Seona cannot resist his seductive charm or his spellbinding kisses. Keegan sets fire to the memories of her sad past and shows her what it means to truly live. But her father has other plans. He’s arranged for her to marry a wealthy Lowland laird. Is Keegan daring enough to steal her away? Or will the vindictive Haldane snatch her first?
By Vonda Sinclair at June 25, 2013
Email ThisBlogThis!Share to TwitterShare to FacebookShare to Pinterest
Labels: Aonach Mor, Ben Nevis, Highland romance, Nevis Range, outdoor sports, Scotland travel, Scottish romance, skiing, Vonda Sinclair

Wonderful pictures, Vonda. I'd heard of the artificial ski slope, but had never seen it.

I've loved all your blogs and pictures of Scotland. Thanks so much for sharing them!

Thanks, Ella! I'm not a skier but it looks like an awesome place to ski.

Thanks, Michele! I'm so glad you've enjoyed them.

Sounds like fun, but you know me, I'm easily chilled too. I'd have to have ski clothes!!!! :) Looks like fun!

Love the pictures. Isn't it crazy how cold it is there? In May I was wearing a winter coat!

Yes, Terry, ski clothes would've been perfect! Wish I'd had some on. I could've taken the 40 minute walk at least. LOL

Amy, thanks! Yes, it's unreal sometimes how much colder Scotland is than where I live in the US. At least 20 degrees cooler on average, depending on the weather.

OH BOY did you bring back the memories. We took this same trip and our photos are almost the same as yours. Wasn't it fun up top and see the panorama. I agree the scratches on the plexiglass sort of spoiled it a bit on the gondola, but it was still a perfect day. We also ate while we were at the top. Great job, Vonda.

Thanks, Paisley! I thought you had told me you'd gone up there. It was wonderful. I just wish it hadn't been so misty so we could've seen the panorama better. I hope to go back on a clear warm day.

A nice place to visit, but i wouldn't want to live there! Interesting about the gondolas. I didn't know they had these, or at least I didn't think about how to make it up and down those mountains.

Cool pictures, Vonda! It looks like an amazing ride up there

I wouldn't want to live on the side of that mountain either, Julie. LOL The weather is too wild and cold for me. This is the only gondola in the UK so it is definitely something unique.

Thanks, Vanessa! I loved being able to see out over the mountains. Just wish we'd chosen a clearer day.

Thanks BB! It's difficult to take a bad picture in Scotland. :)

This was really interesting, Vonda. Thank you for sharing your photos!

Thanks, Gerri! I'm glad you found it interesting!

Hello MS Sinclair, next time you come to Scotland, you must visit Applecross, providing you have a hire car, Tour buses don't go up there as its single track road. Have you been to Tantallon Castle, Dirlton Castle, Dunnottar Castle? These are highly recommended places to visit.

Thanks for the recommendations, Alan! I would love to visit Applecross. I checked it out on Google streetview. What an incredible view over the water! We'll be in that general area but it's still a pretty long drive off our route. We'll have to see. I've been to Dunnottar but not Tantallon or Dirlton. I definitely want to visit them in the future.