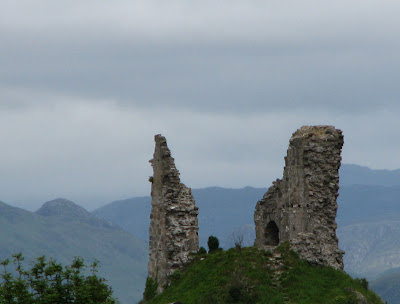 When we first arrived on Skye, we saw the Castle Moil ruins (aka Castle Moal, Dun Akyn, Dun Haakon and Castle Dunakin.) It is located near the harbor of the village of Kyleakin. To prevent unpaid crossings through the narrow straight between Skye and the mainland, the reputed builder of Castle Moil, a Norwegian princess and wife of a MacKinnon chieftain remembered today as "Saucy Mary", had a chain hung from the castle walls across the channel to the mainland. The chain was raised to block passage and thus allowed her to extract toll from all vessels which passed through the Kyles. Why was she named Saucy Mary? Allegedly Mary, following payment of her tolls would, as a gesture of thanks, flash her breasts at the sailors as the ships would pass.

Our first stop on June 25 was the Talisker Whisky Distillery (the only whisky distillery on Skye). This whisky is known for its above average peat content, and "salty" (or "spicy") character. It sells well but the high phenol level and distinct taste may prove "challenging" for the casual whisky drinker. Additionally, the water used for production, from Cnoc nan Speireag, flows over peat which adds additional peatiness to the whisky. It's also dark in color. Both Johnnie Walker and Drambuie (a liqueur, not a whisky) use Talisker as a component of their blended drinks; its presence is most notable in Walker's Green Label 15 Year Old Pure Malt.

The distillery was built in 1830 by Hugh & Kenneth MacAskill, and expanded in 1900. The distillery was nearly destroyed by fire in 1960, however five exact replicas of the original stills were constructed to preserve the original Talisker flavor. Talisker was a favorite whisky of writers Robert Louis Stevenson and Henry Vollam Morton. 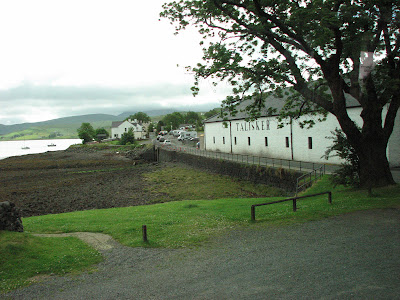 It was TOO early in the morning (9am) for me to partake of the free whisky sample, but several of the tour members enjoyed the drink. The tour was really interesting and we learned all about how whisky is made. It's a long complicated process. 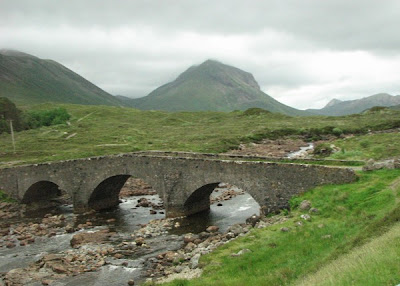 This lovely old three arched stone bridge is no longer used for traffic. It's located in Sligachan at the head of Loch Sligachan along the main road between Broadford and Portree. The Cuillin Mountains are in the background. 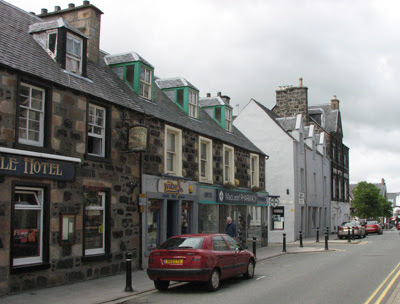 We had lunch in Portree (above) the capital of Skye. This is a nice historic town. I spent most of my time here in a restaurant and in the post office, where I waited in line to exchange money. 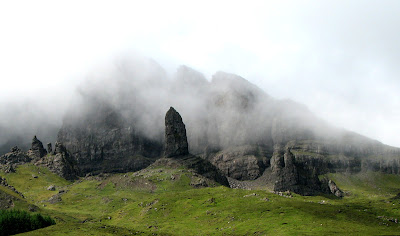 We spent the afternoon touring the Trotternish peninsula. This was my favorite part of the day because Skye is such a fantastically beautiful place, the perfect setting for myths and legends! One of our first stops was the Old Man of Storr (above). The area in front of the cliffs of The Storr is known as The Sanctuary. This has a number of weirdly shaped rock pinnacles, the remains of ancient volcanic plugs. One of the most famous of these is known as The Old Man of Storr. When we stopped, a fast mist was moving in front of and behind the rock formation. Here's one I took once the mist moved by. It seemed like the clouds had come down to earth for a visit. 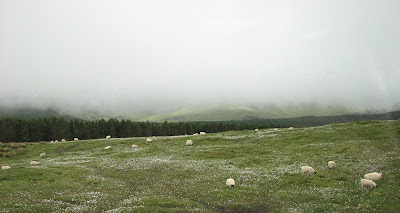 This is a beautiful sheep pasture. I thought the white flowers and white mist added a magical touch. 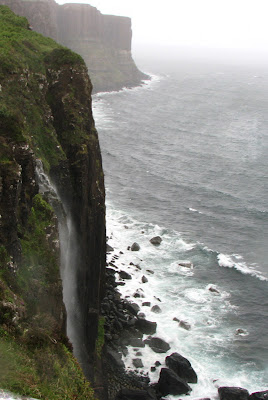 We stopped at Kilt Rock (above) during a gale, the first I've been in. The wind was blowing really hard and the rain was sideways. But dedicated sightseer and photographer that I am, I put my hood on tight and braved the storm. Because of the strong force of the wind blowing in off the sea from the Sound of Raasay and The Minch, I could hardly get close enough to the rail to take a photo of the waterfall and Kilt Rock. The wind kept blowing me back. It was almost like the tropical storm I was in once. On the way back to the bus, I thought the wind would literally blow me off my feet. It was a nice fun adventure!
More on Isle of Skye next time...
By Vonda Sinclair at August 15, 2007
Email ThisBlogThis!Share to TwitterShare to FacebookShare to Pinterest
Vonda Sinclair
Vonda Sinclair writes Scottish historical, paranormal and contemporary romance.