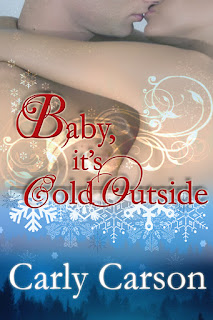 I released a new book this week which is always exciting!

Blurb: Never hoax a man if you're going to be trapped with him in a blizzard.
Payback can be intense.
It's getting cold outside.
But hot in here.

Grant watched Jenna shiver, despite the heat of the blaze that scorched his back. He didn't know why she wasn't warming up more quickly. Between the fire and the smoking hot woman in front of him, he might have to venture out into the blizzard himself to cool down. His stupid, clueless body didn't care how lame her story was.
"How long have you known my sister?" His family was a subject that could kill his libido if anything could.
"Several years. I met Kate when I first moved to Florida. Recently, I took one of the classes she teaches at the community center."
He nodded neutrally. He didn't care about the damn classes.
"You shouldn't blame Kate for anything I do," Jenna added. "She doesn't think I should be let out after dark without a keeper."
Grant eyed her bedraggled state. "She might have a point—"
"Hey! I did not pop out of a cake! I am not your singing birthday telegram! So you can just stop eyeing me like I'm your playmate du jour." She bolted upright and her feet hit the floor.
"Calm down." He moved after her as she stood, and caught her arm. He was a little appalled at the sense of dismay that had whipped through him when she started to leave. "You can't go. There's a terrible storm out there."
"I came in from that storm, and I can go right back out in it. I'm every bit as tough as I look."
He couldn't help laughing. "You don't look tough at all." Long, golden brown hair, curling a bit now that it was drying. Big brown eyes that managed to look both uncertain and inviting at the same time. And lips as full as Cupid's arched bow. Just waiting to strike and slay a man.
She wrenched her arm from his hand. "And don't patronize me."
He held up a hand and pantomimed wiping the smile off his face. "Okay then. You are tougher than that ten line algorithm I've been working on over there." He jerked his head towards his computer. "Lord knows it doesn't talk back like you do."
She stifled a giggle.
But he didn't feel like laughing any more. Her arm had still been cold and, when he considered the state of her clothes, he couldn't be surprised.
"There won't be any cabs out there, anyway," he reminded her.
"I got a cab to come here." She edged away from him.
He grasped her arm again, surprised at his own determination to keep her. "That cab driver was real anxious to hit the road and get home. He said the only good thing about this weather was that the streets are deserted."
"There's the subway."
"They have problems in bad weather, too. Besides, the way you're dressed you can't go anywhere." His eyes strayed to her tits for the hundredth time since she'd appeared. Though he tried not to be obvious, a woman couldn't dress like she did and not expect a man to look.
"You could lend me a sweatshirt."
He eyed her sexy sandals. Aside from their complete inability to protect her from the snow, he damn well knew what the message was. As would any other man who saw her in them. "I can't help you with your footwear. And a sweatshirt with your bare legs sticking out—" He shook his head. "Not safe for public viewing."
"What is that supposed to mean?"
"Are you kidding? You must know you have fabulous legs."
"A leg man, are you?"
"Nope. More of a boobs and butts guy myself. Since you asked." He couldn't help grinning at her flustered face. "But I like anything and everything on the right woman."
"I am not the right woman for—for whatever you might be implying."
"Don't be so defensive. You can't go anywhere 'til you warm up." He slung his arm around her shoulders. "I've got some body heat to share." He tugged her to his side.
Wow, she smelled good. Snow and roses. A potent combination. Especially when combined with a barely-there outfit, a rack to die for, and those legs.
He tried to inhale discreetly. She was up to something more than what she'd told him. He knew that for a fact. But he'd been holed up in his apartment for days, working like the devil, and he could definitely use a break. Besides, he really couldn't send her back out into the blizzard.
He glanced out the window where the snow fell silently out of the dark sky, backlit by the lights of New York City. Its beauty didn't hide its dangers. She had no money, no warm clothes, and nowhere to go, unless he chose to believe her story about the friend she could call. Which he didn't.
But, even if she was a liar, what harm could she do him? He might as well take advantage of the opportunity fate had dropped into his lap. So to speak. Because his lap was the part insisting as loudly as possible that Jenna should stay at least until it got some relief. ***
Available at Amazon     Barnes&Noble     Smashwords
What's equally as fun, I'm participating in a huge holiday sale with 100 other authors who are offering over 140 books available for 99 cents apiece. How can you go wrong? As we say on the site, Load up. You won't gain a pound! Check us out here: