A lot of us love a good Scottish fantasy--a sensual historical romance novel featuring a hot Highlander in a kilt. We love listening to his dreamy accent, his tongue rolling over the words.
Another thing we love about those hot Highlanders is their toughness. They're highly-trained, hardened warriors who can wield a blade for hours, if necessary. Highlanders are survivors, and one reason for this is that they live in a harsh environment.
Durness, on the north coast of Scotland, has to be one of the harshest (at least it was when we recently visited.) Here you can find high winds at almost any time of year, and usually that is an icy cold north wind. Perhaps it's coming straight down from the North Pole or Iceland.
There are some gorgeous beaches here with white sand and blue water, but I'm guessing only those polar bear club folks are tough enough to sunbathe or swim here.
The island you see above is Eilean Hoan, "the burial island." Hoan comes from the Old Norse How-ey and Eilean is Gaelic for island. Four families lived on the island until the Clearances. 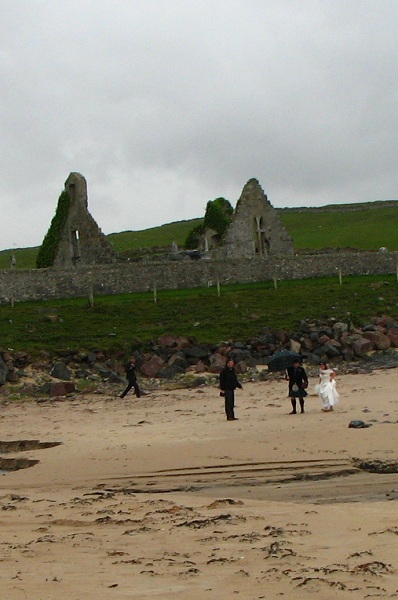 We saw this bride and groom at the beach at Balnakeil Bay having some wedding photos taken. This is a Scottish bride, obviously. Notice the bare arms? I had on 4 layers of sweaters and jackets. The groom is no doubt feeling a nice draft beneath his kilt. Balnakeil Church ruin is in the background. 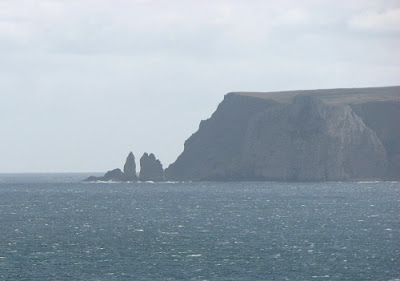 I love Scotland's wild and untamed north coast. Yes, the weather here is punishing at times but in order to witness all this beauty, it's worth it.

When we stayed there in May, the owner of the B&B said he'd lived there eight years and had never experienced such severe weather as those three days. We're just lucky, I guess. Storms seem to be drawn to us. LOL


Would you be willing to brave the cold wind and rain for some beautiful views?
Thanks for checking out my pics!!
Vonda
My website: www.vondasinclair.com
Facebook: http://www.facebook.com/VondaSinclair
Twitter: http://twitter.com/#!/vondasinclair

My Fierce Highlander: Gwyneth Carswell, an English lady banished by her father to the harsh Scottish Highlands, wants nothing more than to take her young son away from the violence of two fighting clans--her own distant kin, the MacIrwins, and their enemies, the MacGraths. She risks everything to rescue the fierce MacGrath warrior from the battlefield where he’s left for dead by her clan. She only knows she is inexplicably drawn to him and he wants peace as she does. When her clan learns of her betrayal, they seek vengeance. Dare she trust the enemy more than her own family?


Laird Alasdair MacGrath is driven to end two-hundred years of feuding with the MacIrwins. But by taking in and protecting Lady Gwyneth and her son, he provokes more attacks from his mortal enemy. As the danger and conflict surrounding them escalate, Alasdair and Gwyneth discover an explosive passion neither of them expected. With the arrival of a powerful man from her past, a horrible decision confronts her--give up her son or the man she loves.

My Wild Highlander: Lady Angelique Drummagan, a half-Scottish, half-French countess, has suffered much pain and betrayal in her past. She wants nothing to do with the sensual Scottish warrior that the king has ordered her to marry because the rogue could never be a faithful husband, but she has little choice in the matter. Dangerous, greedy enemies threaten her from all sides and she's in dire need of his protection.

Sir Lachlan MacGrath, known as Seducer of the Highlands, possesses a charming wickedness and canny wit which has earned him much popularity. After the king decrees that he wed the fiery hellion, Lachlan discovers there is one woman who can resist him--Angelique. Can he break through her icy façade and melt her heart, or will the dark secrets lurking in her past not only cost them their future together, but their very lives?
By Vonda Sinclair at October 04, 2011
Email ThisBlogThis!Share to TwitterShare to FacebookShare to Pinterest
Labels: Durness, My Fierce Highlander, Scotland, Scotland travel, Vonda Sinclair

Gorgeous! Thanks so much for sharing. Would love to go back to Scotland myself.

Thanks for checking it out, Brenda! I hope you get to return to Scotland soon!

Beautiful pics Vonda! Heck, if you keep posting all of these, I can save my money and just enjoy Scotland vicariously through your photog skills.

Wow, Vonda. Those photos make even this fun-in-the-sun-vacation-kinda gal wanna head off to Scotland. Just gorgeous.

You're missing the point, Vonda - You grab a nice hot Scot to keep you warm. ;)

I'd love to be anywhere in Scotland. It stole my heart and I know it's roaming around somewhere without me. Thinkin' I best go back and try to find it. :)

Your photos are gorgeous and you can just feel the strength in the elements. Thank you for sharing.

Derek, that sounds like a great money saving idea for you. LOL! Thanks for dropping in!

Thanks, Randy! Bring your winter clothes and we'll head to Durness!

I would, Paisley LOL! But my DH might object. ;) I know how you feel. Scotland stole my heart too. Thanks!

OMIGOSH SO GORGEOUS! I am SO jealous. The Scottish accent is my all-time fav--I'm torn between Leonidas and Pippin! LOL

These are awesome pictures!!! I would definitely brave the cold to see these views.

LOVE the twins and the kilt reference. I always wanted to see... ;)

AND I completely agree with Paisley. :)

I can see why Sango Bay is one of your favorite spots, Vonda. I think I might feel the same way about it. I love wild, wild weather. The bride on the beach made me feel {{{frigid}}}, though!
~Donna

Thanks, Bella! And I know what you mean! I LOVE a Scottish accent!

Tami, the lambs are so cute, aren't they? The kilt seemed to stay in place well. It must have been heavy wool. LOL The cold is worth the views. Thanks!

Donna, thanks! Yes, Sango Bay is amazing and I only found it by accident on my first trip (when I got to explore it alone because my friend did not feel like climbing all the steps.) I fell in love with it. The wild dramatic beauty or something about it spoke to me.

I got to Durness on my last trip and it is all you said and more! I especially loved Smoo Cave -- went there for research for a book I was writing...very cool!

The pictures are fabulous - thanks for sharing.

Thanks, Terri! Yes! I went to Smoo Cave too and loved it. I plan to do a separate blog post about it. I had the pics all ready to post here and I realized how MANY pics I had, so decided to divide it.