The Vampire... In My Dreams & Interview w/Terry Lee Wilde 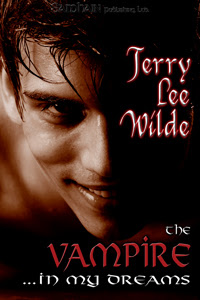 Hi, today I'm talking with Terry Lee Wilde about her latest young adult book, The Vampire... In My Dreams, published by Samhain.

Life is full of true mysteries and turning them into fictional stories can be great fun. How can a mother lift a car weighing thousands of pounds to save her son? Why was a ship floundering off the coast of Australia and the sailors never found? Terry Lee Wilde has been fascinated with the paranormal since she was young. When she isn’t creating new paranormal adventures or fantasies for teens or writing true-life stories for teen magazines, she creates award-winning teddy bears!

VS: Wow! What a sexy guy on your cover, Terry. Please tell us what this book is about:

TLW: Love bites when a seventeen-year-old vampire and witch tangle. Marissa Lakeland faces her worst nightmare one dark and misty night when she chases a gorgeous hunk of a guy to prove he’s a vampire. So why does the thought of tall, dark and vampiric appeal to Marissa, when there’s no way a vampire can compel a witch to do his bidding? At least that’s what she’s read in vampire lore. But lore can be mistaken.

Fledgling vampire Dominic Vorchowski knows Marissa’s the only one who can save him. Only why does she have to be a witch? Fate has thrown him together with the bewitching Marissa and if he gains her trust, he’ll have his life back again. Except for that whole eternal thirst for blood thing. And the fangs. Not to mention the aversion to intense sunlight. In any event, he’s set his sights on one girl who’s totally off the menu.

The centuries-old vamp Lynetta wants Dominic to replace the lover she lost, and no teenaged witch is going to take her guy away. Dominic and Marissa must stop the vampiress from winning the battle of the night…but time is running out.

VS:What inspired you to write this story?

TLW: A lifelong fascination of watching plays and movies of Dracula, but of course, he was always kind of a bad guy. I wanted a vampire who was sexy, dark, and the good guy in a devilish sort of way. :) But to have a powerful hero, I needed to have a heroine who could be his match, even though she doesn't think she's very capable. So what also had powers? Witches.

VS: Please tell us more about this vampire. What is he like?

TLW: Here's an excerpt... "[Dominic Vorchowsky] was all there. All drop-dead gorgeous six feet of him. Darkly seductive, he wore ebony black jeans, matching Doc Martens leather oxfords, and a black satin shirt opened slightly, revealing a smidgeon of his broad, bare chest. I looked up at his face, hoping the fangs were still well-hidden and under control.
His deep brown eyes darkened to midnight and his lips curved up. I breathed a guarded sigh of relief to find no fangs extended. His dark brown hair secured in a ponytail showed off his square jaw and handsome angular features.
“Dominic Vorchowsky,” he offered, and bowed his head slightly.
Definitely a vampiric action if I’d ever seen one. Suave, polite, enticing.
His voice had a strange melody, a strong, sensual attraction—just like I imagined vampires were supposed to have. His eyes gazed at mine with such intensity I wondered if he was attempting to draw me under his spell. He’d woo me, then bite me and make me his forever. The notion should have made me ill, but the look in his hungry eyes lured me to drink every bit of him in. No one had showed that much interest in me, ever. For an instant, I was ready to bare my throat and let him take me.

VS: Whew!! He definitely sounds hot! How is writing YA (young adult) different from writing romances for adults?

TLW: The protaganist is a YA between the ages of 13-18, sometimes a little older. The teens have to solve the problems, rather than an adult, just like in younger children's stories. Some of the YAs are pretty sexy. Some are sweeter. Word count is less, and chapter sizes are generally shorter. But teens are just as critical, and sometimes more so than adult readers, so you have to write the most entertaining story you can, just like for adult audiences.

VS: Good to know! What's next for you?

TLW: I'm working on revisions to two teen paranormal novels, The Beast Within, and The Trouble with Demons, and revising the Western Ghost/Time Travel, A Ghost of a Chance at Love.

VS: Those sound intriguing! Do you have any advice for unpublished writers?

Never give up. Learn all you can from workshops, books on writing, and revise, revise, revise. Make it the best it can be before you send it off. And begin to work on another story right away while you're waiting to hear on the first.

VS: Wonderful advice! Now everyone, if you're ready to run and buy a copy of The Vampire... In My Dreams you'll find it here:
http://samhainpublishing.com/books/the-vampirein-my-dreams

You can meet Terry's characters at www.terrywildeteenbooks.com Or visit her blog at: terryleewilde.blogspot.com

Thanks for being our guest today, Terry!
By Vonda Sinclair at October 09, 2007
Email ThisBlogThis!Share to TwitterShare to FacebookShare to Pinterest
Vonda Sinclair
Vonda Sinclair writes Scottish historical, paranormal and contemporary romance.